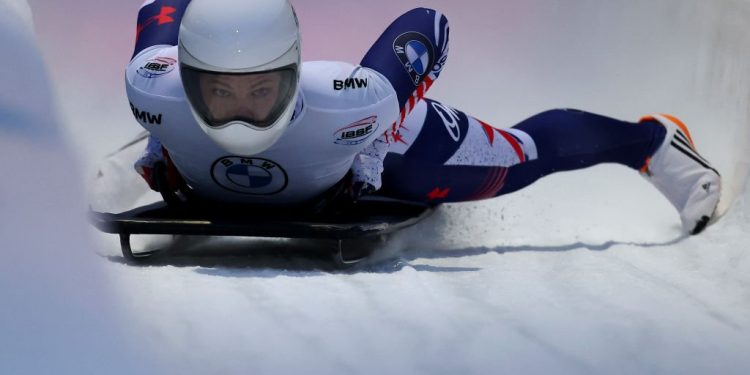 
Kelly Curtis has become the first black athlete to compete for the United States in the skeleton at the Winter Olympics – but who are her parents? Which sport is her father John involved in?

Now the luge events at Beijing 2022 have been completed, the skeleton has taken over.

While luge athletes tackle the track lying on their back, skeleton athletes lie face forward – with the general idea of both the same.

At these Winter Olympics, athlete Kelly Curtis has become the first black athlete to compete for the United States in the skeleton.

Who are Kelly Curtis’s parents as she competes in the skeleton at the Winter Olympics?

Curtis was born in January 1989 in Princeton, New Jersey.

Kelly’s mother is Deb – who has worked in the fitness community in NJ.

Unsurprisingly, given the athletic background to her early life, Kelly Curtis took on sports – but the skeleton was not something her or her parents had in mind.

It was not until she was at Springfield College, that a coach suggested she try the skeleton for the first time.

She qualified for the US Olympic team and is the first black athlete – male or female – to ever represent the United States in skeleton.

Still in her rookie season, Curtis has a best result of the season a few weeks ago, when she came sixth in the World Cup in Switzerland.

In the first two heats for the Women’s Skeleton, Curtis finished 19th and 18th, respectively.

In the second heat, only the top 20 advance through – which Curtis was able to do.

While her parents are focused on sport and fitness as their main job, skeleton athlete Kelly Curtis is also in the US military.

She is a Airman 1st Class in the United States Air Force – the only Air Force representative in the US Olympic squad as part of their athlete programme.

Her basic training was completed, with her first deployment to Italy.

Brother Jimmy also spent time in the US Air Force.

The other two siblings are brother Jay and sister Kitty.

New Residential (NRZ): This 8.3% Yielder Is A Dividend Investor’s Dream