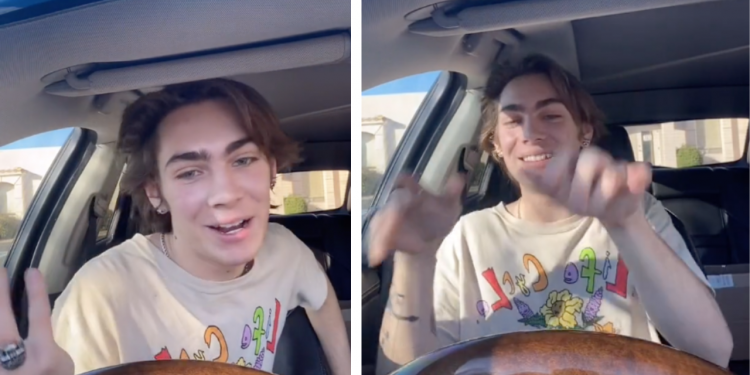 
TikToker Zach Montana never expected to go viral because of his dad’s 43-year-old song but that is exactly what happened after a video he posted on January 5 became a huge hit on the platform.

The TikToker recorded himself jamming to his dad’s track in his car. The song, titled Surrender To Me, caught many fans and Zach himself off-guard due to its funk-R&B feel.

It’s one of those songs that Guardians of the Galaxy‘s Star-Lord would jam to as well.

At the time of writing, Zach has over 68,000 TikTok followers and close to 2 million likes.

The 19-year-old is an Arizona State University student and a budding musician.

Zach’s TikTok account shows his love for music as most of his videos showcase the aspiring musician playing a song on his guitar.

His video where he posted the Surrender To Me track created by his dad is one of his most viewed clips on the platform with over 3 million views, at the time of writing.

You can watch Zach’s TikTok here. However, we must warn you that explicit language has been used.

TikTok’s Surrender To Me song explored

Zach is seen sitting in a car in the viral video that introduced the world to his dad’s song.

“There’s a horn section! Just wait … It’s so good!” the star exclaims in the video. He mimes the keyboard riffs and brain explosions. “And he never released it! I’m so mad at him,” he says.

In a recent interview with The Guardian, Zach revealed that he posted the viral video when he had 10,000 followers and went to sleep that night not thinking much of it. The next morning, he woke up to thousands of views on his video.

“I woke up to texts from people I never get texts from – like my hairstylist – saying, ‘Yo, this is crazy!’,” Zach told the outlet.

Soon, many A-list musicians like Meghan Trainor and Herman Li found the TikTok and left comments under it. Even music critic Anthony Fantano called it “a banger”.

On February 3, the R&B pop track finally got an official release under the moniker FireCityFunk.

Who is Zach’s dad?

The TikToker’s father, William Curly Smith, is a real musician in all his glory.

The singer has recorded and toured with musicians such as Jo Jo Gunne, Steve Ray Vaughan, Boston, Belinda Carlisle and Willie Nelson.

Approximately three weeks after Zach’s clip of his car jamming session with his dad’s song went viral, the duo arrived at a studio in Chicago to get the song remastered from tip to toe in order to make it available for streaming.

Many of Zach’s TikTok followers suggested that Surrender To Me would go very well with Guardians of the Galaxy’s disco-themed soundtrack.

And just like that, Zach was contacted by Marvel’s music supervisor, Dave Jordan, who proposed to put the song in front of the Guardians’ director, James Gunn.

It’s not confirmed yet but given that a third instalment of the film is under work, William Curly Smith’s Surrender To Me could very well find its way into the Chris Pratt starrer.

JEFF PRESTRIDGE: Would we notice if FCA goes on strike?