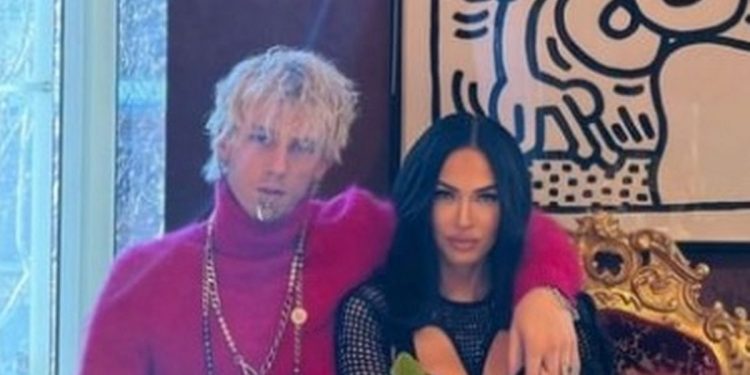 
Megan Fox has shared an intimate moment with her Instagram followers after the actress uploaded a bath time clip to her Story.

The Transformers star, 35, and her 31-year-old rapper beau often share public displays of affection and Monday was no different as Megan shared the video with her 18.2 million fans.

The couple were seen lying side by side in their full bath which was infused by rose petals.

The pair showed off matching painted nails as they enjoyed their romantic time together.

The heavily tattooed musician, whose real name is Colson Baker, can be heard laughing before asking: “Uhhh, what the f*** is happening?”

Earlier in the day, Megan also shared snaps from a Dolce & Gabbana fashion show where she showed off her stunning figure in a see-through black number before wearing a top emblazoned with the word “sex”.

She looked stunning as she took to the catwalk for the fashion brand and also posed for pics alongside her man who was also involved in the show.

The pair shocked their fans went they announced their engagement last week.

Shortly after the proposal Megan ploaded a video clip that captured the moment that her man got down on bended knee and shared with fans that she and the rapper drank each other’s blood after agreeing to tie the knot.

In the footage, the mother of three, who was previously married to Brian Austin Green – appears overwhelmed with emotion as she watches Machine Gun Kelly present her with a diamond ring.

Megan shared a lengthy caption alongside the video as she detailed how they had “walked through hell together” and now couldn’t be happier to be getting wed.

She wrote: “In July of 2020 we sat under this banyan tree. We asked for magic. We were oblivious to the pain we would face together in such a short, frenetic period of time.

“Unaware of the work and sacrifices the relationship would require from us but intoxicated off of the love. And the karma.

“Somehow a year and a half later, having walked through hell together, and having laughed more than I ever imagined possible, he asked me to marry him.”