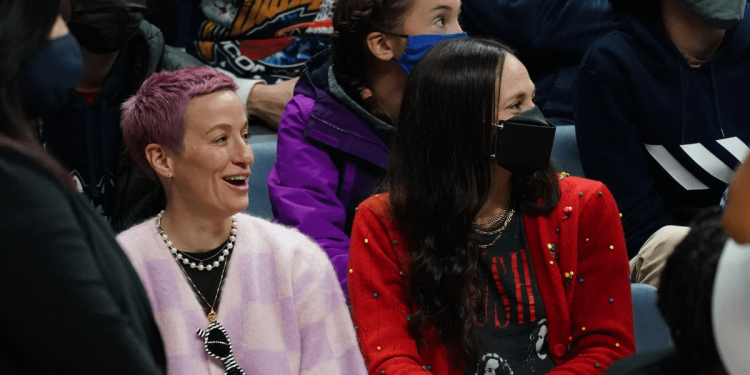 The XFL, which is owned by Dwayne “The Rock” Johnson in its resurgence, used very identical branding to “TogethXR” in its push to create a league that’s welcoming to all.

Rapinoe made sure to call Johnson and the organization out in its seemingly unoriginal branding efforts.

“Welp. This is awkward,” Rapinoe tweeted. “Only thing @TheRock and @XFL2023 are gonna be cookin up is a response to the Cease and Desist and an ENTIRE new brand ID. @togethxr got this on 🔒 boys.”

Eventually, Bird chimed in on the conversation as well as Manuel.

Johnson set a research and development partnership between the XFL and the NFL to try and expand the game of football. He secured the league from WWE owner Vince McMahon for $15 million in 2020.

McMahon started the XFL in 2000 in partnership with NBC to create more opportunities for the game’s growth. However, the organization’s operation ended after one season. When McMahon tried to relaunch in February 2020, it was halted due to the coronavirus pandemic, and the organization filed for bankruptcy protection in April 2020.

Johnson and his business partner, Danny Garcia, hope to establish a league filled with opportunity for everyone in a time where the NFL has been under intense scrutiny concerning the lack of diversity among the league’s owners, managers and head coaches.

But as Johnson and Garcia figure out the kinks of what they hope will be a positive restart, the two may have to come up with a different branding plan than the one they have now.