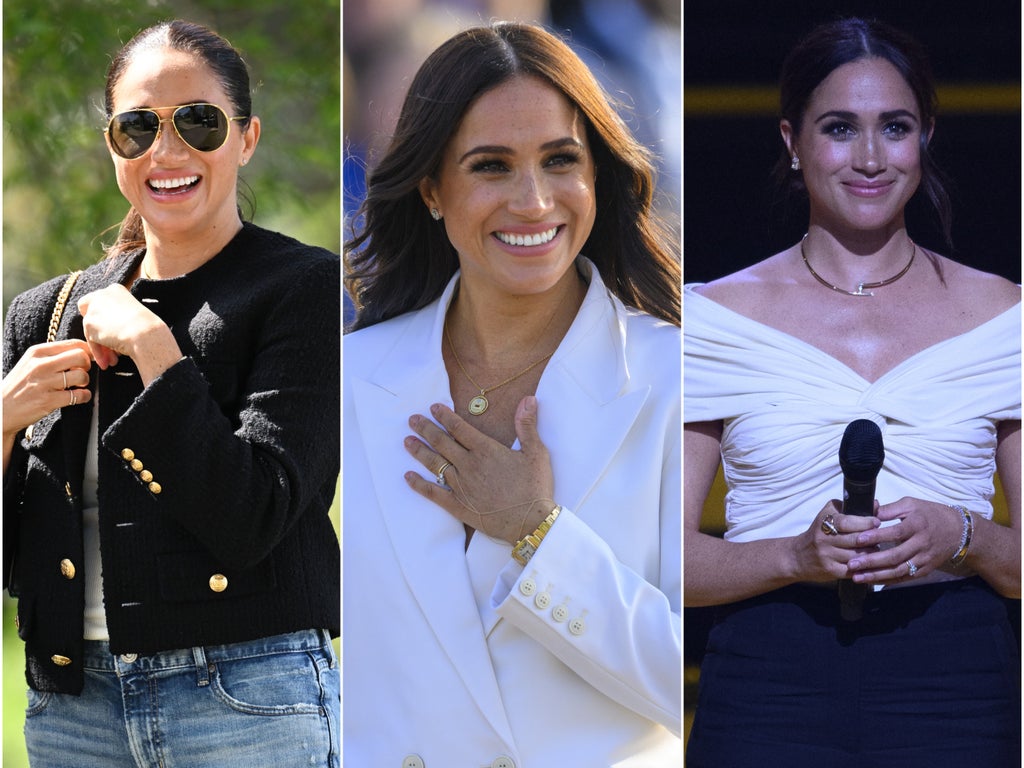 Meghan Markle has long been praised for her elegant, minimalist approach to fashion.

Over the years, her daytime looks have included plenty of oversized boyfriend shirts, while her evening ensembles usually feature crisp tailoring, bold pops of colour and sleek shapes.

The Duchess of Sussex is currently in The Hague, Netherlands, with husband Prince Harry to attend the Invictus Games.

The trip marks the couple’s first public appearance together in Europe since stepping down as senior members of the royal family and moving to California in 2020.

As the games get underway, Meghan’s European wardrobe has already encompassed an exquisitely tailored all-white suit, plenty of meaningful jewellery choices and a nod to her sporty-chic style.

See more of Meghan’s fashion moments from the event below.

Meghan was seen smiling and waving to fans on Friday 15 April as she arrived in an all-white suit from Valentino.

She wore a double-breasted white blazer, paired with wide-leg trousers and matching Aquazurra heels. She completed the look with a Valentino Garavani One Stud bag.

The Duchess made sentimental jewellery choices, opting for the same Galanterie de Cartier earrings she wore on her wedding day to Prince Harry, and at their son Archie’s christening.

On her wrists she wore a Cartier Tank watch that once belonged to Princess Diana and a tennis bracelet she was gifted by Prince Charles.

Down for the ride

On Saturday afternoon, the Duke and Duchess took part in a driving challenge held by Jaguar Land Rover.

The couple were seen sitting in mini Land Rover vehicles as they were driven around a small track by children.

Meghan stayed true to her preppy-style, arriving in a pair of mom-style blue jeans from Japanese brand Moussy and a double-breasted tweed jacket from Celine with gold buttons.

She paired the outfit with two-toned ballet flats by Chanel and Linda Farrow aviator sunglasses. Her dark hair was swept back into a sleek ponytail and her makeup was minimal and natural-looking.

Prince Harry and Meghan made headlines following their appearance at the opening ceremony of the games on Saturday evening after the couple shared a brief kiss on stage.

While their public display of affection won the hearts of fans, it was little distraction from Meghan’s elegant monochrome look.

The duchess opted for an ivory bodysuit from New York-based designer Khaite. The piece featured off-the-shoulder sleeves and a ruched knot in the middle of the neckline.

Arriving to watch the sitting volleyball on Sunday 17 April, Meghan opted for a more casual appearance.

The duchess wore a collarless off-white wrap around jacket, which was belted at the waist. She paired it with form-fitting dark blue jeans and a pair of brown suede stilleto shoes.

The Republican Party is a clear and present danger

Wally Campo has died at...

Even as game week approaches,...