Nevin makes an A-League Women move, joining Victory after three seasons with Western Sydney Wanderers.  The 19-year-old first made her A-League Women debut with Wanderers in 2018 as a 16-year old.

She has since made twenty-eight top flight appearances, twenty-five of them as a starter.  Nevin was rested though in the back part of last A-League season, after having played several years of back-to-back NPL and A-League Women campaigns.  The rest turned out to her benefit.

She was called up by Tony Gustavsson to the Matildas, making her debut against Denmark in June.  Nevin was then selected for the Olympic squad, seeing the field once against the United States.  She most recently featured for Australia in their September Republic of Ireland match.

Now she starts a new A-League Women chapter.  The move will reunite Nevin with her self-proclaimed “Bestie”, fellow Matilda Kyra Cooney-Cross.  The two are not just great friends, they were also roommates for more than year when Cooney-Cross moved in with Nevin and her family during her previous time with the Wanderers.

Cooney-Cross made the change to back to the Victorian side last year, signing a two-year deal that will keep her in Melbourne until the end of this upcoming campaign.  Nevin is similarly signed until the conclusion of the 2021-22 A-League Women season.

Speaking of the signing of Nevin to his squad, Jeff Hopkins the Head Coach of the Victory said:

“Courtney is one of the country’s best young talents and we are thrilled to have her join our squad for the team’s title defence,” Hopkins said.

“She is the complete full-back with her attributes in defence and lethal qualities in attack which will add another dimension to our back-line as we look to finalise our squad in 2021/22.

“We’ll continue to develop and nurture Courtney’s development as one of the brightest prospects in Australian football – especially with the 2023 Women’s World Cup on the horizon.”

Nevin becomes the 15th player confirmed for the upcoming Melbourne Victory campaign.  Like Cooney-Cross, Melina Ayres is already on an existing contracts.  Victory have also signed Alana Murphy and Harriet Withers to the team.

The club will be hoping that this will help them in achieving back to back Championships.

An in depth interview with Lisa De Vanna aired last week where she stated she was walking away from football. The Melbourne Victory now confirm that at this stage there are no plans for her return. 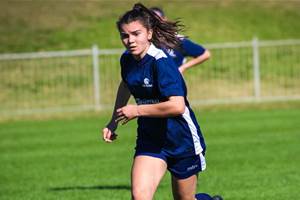 The Melbourne Victory have signed Paige Zois and Harriet Withers for the upcoming season.