Melissa Lucio – latest: Texas mother sobs in emotional phone call where she learns about stay of execution – The Independent 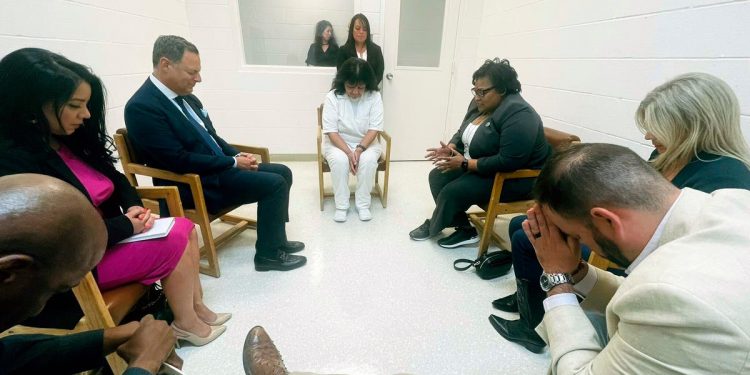 Melissa Lucio sobs as she learns her life has been saved

The Texas Court of Criminal Appeals granted Melissa Lucio a stay of execution on Monday and ordered a court to consider new evidence in her case, just 48 hours before she was scheduled to be put to death.

Lucio was told the news in an emotional phone call with Texas Rep Jeff Leach where the Hispanic mother-of-14 sobbed and gasped, asking “are you serious?”

In a statement, the 53-year-old thanked God for saving her life and paid tribute to her late daughter Mariah who “is in my heart today and always”.

Lucio’s attorneys and supporters also celebrated the ruling including Kim Kardashian who called it the “best news ever”.

The last-minute stay came minutes before the Texas Board of Pardons and Paroles was to recommend whether or not Lucio’s death sentence should be commuted to life imprisonment or if she should be granted a 120-day execution reprieve. The parole board said it would not recommend clemency after the stay was announced.

Lucio was sentenced to death for the 2007 murder of her two-year-old daughter Mariah.

Her lawyers say she was coerced into a false confession during an aggressive police interrogation and that scientific evidence shows Mariah died from a fall.

Melissa Lucio’s attorneys have said there is still “a long way to go” before the mother-of-14 has her freedom back.

“There’s still a long way to go in Melissa’s case, and there’s much more that stands in the way of Melissa and an exoneration,” said The Innocence Project’s Vanessa Potkin, who is a member of Lucio’s legal team.

“But today’s stay and remand to have hearings on new evidence of her innocence really opens the door to the potential of a new trial in her case and ultimately, complete vindication.”

The stay of execution does not mean Lucio is now free.

She will remain on death row as proceedings continue.

The next step will invole the trial court in Brownsville holding an evidentiary hearing where Lucio’s attorneys will present new evidence in the case that they say shows her innocence.

There, the legal team will request a new trial for Lucio.

This will ultimately be decided upon by the Texas Court of Criminal Appeals.

Melissa Lucio’s children have said they are now looking forward to spending Mother’s Day with their mother after a court’s ruling means she will now live to see the 8 May celebration.

Bobby Alvarez told reporters that his mother “wants a lot of cards” this year after the Texas Court of Criminal Appeals granted her a stay of execution and stopped the 27 April death sentence from being carried out.

The 22-year-old spoke at a press conference together with his brother John on Monday evening in Gatesville, Texas as they celebrated the news.

He said he was in “shock” when he heard about the 11th-hour stay of execution.

“I couldn’t believe what I was hearing. I immediately started crying,” he said.

He said they were now speaking about “what to do about Mother’s Day” – something that hours ago was not a reality.

Mr Alvarez was just seven years old when his mother was charged over his sister’s death and sent to death row.

He said he had spent his childhood “waiting for my mother to come out so we can start that future together”.

“Right away I never had a mindset that it was my mom [who killed Mariah],” he says.

“I knew my mom couldn’t have done it.”

Melissa Lucio’s son said “it’s been 15 long years” as his mother has been held on death row awaiting execution for the death of his baby sister.

John Lucio, 32, spoke at a press conference on Monday evening in Gatesville, Texas, after the Texas Court of Criminal Appeals granted her a stay of execution.

Melissa Lucio’s mother has thanked all the people who supported her daughter in her plight and thanked God “for the miracle” of her stay of execution.

“Thank you for supporting Melissa and thank you to everybody and to God,” she said in a virtual press conference with members of Lucio’s legal team on Monday afternoon.

“Thank God for the miracle.”

One of Melissa Lucio’s attorney has called the decision by the appeals court to grant the mother-of-14 a stay of execution “the right thing”.

Vanessa Potkin, director of Special Litigation at the Innocence Project and one of Melissa’s attorneys, released a statement following the Court of Criminal Appeals’ announcement that it was halting Wednesday’s execution and ordering the trial court to review evidence in the case.

“The Court of Criminal Appeals did the right thing by stopping Melissa’s execution. Medical evidence shows that Mariah’s death was consistent with an accident. But for the State’s use of false testimony, no juror would have voted to convict Melissa of capital murder because no murder occurred,” she said in a statement.

“It would have shocked the public’s conscience for Melissa to be put to death based on false and incomplete medical evidence for a crime that never even happened.

“All of the new evidence of her innocence has never before been considered by any court. The Court’s stay allows us to continue fighting alongside Melissa to overturn her wrongful conviction.”

Listen: Melissa Lucio sobs as she is told that her life has been saved

An emotional audio clip has captured the moment Melissa Lucio learned that her life had been saved, after the Texas Court of Criminal Appeals granted her a stay of execution.

The 53-year-old mother-of-14 was told the news in a prison phone call with Republican state Rep Jeff Leach on Monday afternoon.

“You haven’t heard the news yet?” asks Rep Leach.

“No, what happened?” Lucio responds.

“The Court of Criminal Appeals issued a stay of your execution for Wednesday,” the lawmaker tells her.

Her voice breaks and she is heard laughing and sobbing with emotion.

“When did this happen?” she cries.

“We just got word about 15 minutes ago,” he tells her.

“That is wonderful! Oh my god!”

Melissa Lucio sobs as she learns her life has been saved

Melissa Lucio’s family are “relieved and grateful” that the 53-year-old’s life has been saved, according to one of her attorneys.

Tivon Schardl said in a statement that the family were happy with the Texas Court of Criminal Appeals’ decision to grant her a stay, saying that it “honored” the memory of two-year-old Mariah in the process.

“We know that Melissa’s children — Mariah’s brothers and sisters — and Mariah’s grandparents, aunts and uncles are all relieved and grateful that Melissa’s life will not be taken by the State of Texas,” he said.

“Texans should be grateful and proud that the Court of Criminal Appeals has given Melissa’s legal team the opportunity to present the new evidence of Melissa’s innocence to the Cameron County district court.”

Mr Schardl thanked “the hundreds of thousands of Texans and people around the US and the world” who had shown support for Lucio in recent months.

The order from the Texas Court of Criminal Appeals means that Wednesday’s execution has now been called off.

However, it does not mean that Melissa Lucio is now free or that she has been exonerated.

Instead, her case will now be sent back to the trial court – the 138th Judicial District Court of Cameron County – to consider the new evidence put forward in the case which supports her claim of innocence.

It is not clear when the lower court will begin reviewing the case.

Lucio’s attorney told The Independent last week that if a stay was granted, the next step for her legal team would be to ask for an evidentiary hearing to present the new evidence.

There, they would ask for Lucio to be granted a new trial.

US Rep Joaquin Castro joins in celebrations over stay of execution

US Rep Joaquin Castro joined in the celebrations that Melissa Lucio’s looming execution has been halted.

The congressman, who represents Texas’s 20th congressional district, said there was “strong evidence” of Lucio’s innocence.

“I’m glad that Melissa Lucio’s execution has been stayed! There’s strong evidence that she did not commit the crime she was charged with,” he tweeted.

Sandra Babcock, the director of the Cornell Center on the Death Penalty Worldwide and one of Melissa Lucio’s attorneys, said Monday’s decision from the Texas appeals court showed the “Melissa’s life matters”.

“The Court’s decision paves the way for Melissa to present evidence of her innocence that should have been heard by the jury that condemned her to death fourteen years ago,” she said in a statement.

“As a survivor of childhood sexual abuse and intimate partner violence, and now locked away for these past 15 years, Melissa’s voice and experiences have never been valued.

“The Court’s decision signals its willingness to finally hear Melissa’s side of the story. If the district court hears all the evidence of Melissa’s innocence, and the gender bias that infected the police investigation and prosecution, we are confident she will return home to her family.”

Philadelphia to end mask mandate, days after reinstating it