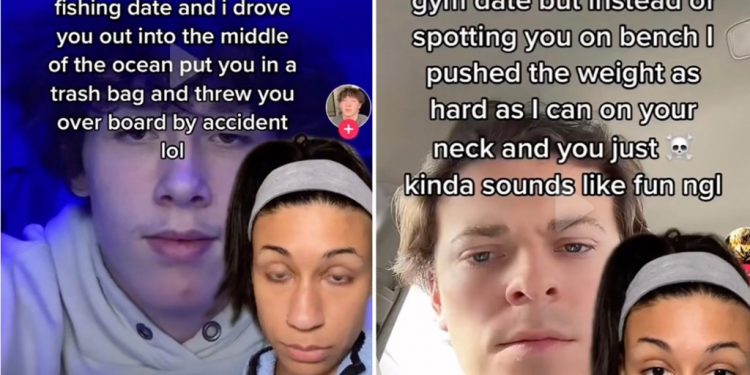 The app has seen a disturbing trend among young men who are sharing their apparent fantasies about violently killing women in short video clips.

The shocking tales they describe seem ripped from tragic real-life headlines about the too-many who are violently killed by their male partners.

The so-called “Imagine If We” meme usually follows as the TikToker appears on camera with a look of reverie as a clip of Frank Ocean’s “Lost” provides the soundtrack to their fantasy. The videos included detailed text onscreen that often begins with “Imagine we.”

“Imagine we went on a fishing date and I drove you out into the middle of the ocean and put you in a trash bag and threw you overboard by accident lol,” reportedly wrote user @matt_chuuuu in his version of the meme.

“Imagine we went on a gym date but instead of spotting you on bench I pushed the weight as hard as I can on your neck and you just ☠️ [die] kinda sounds fun ngl,” added @theincrediblecrohn, whose account has since been deleted.

Most of the original posts have been reported and removed from TikTok, where threats of violence on anyone are subject to disciplinary action, according to their policy. However, women’s advocates have shared screengrabs of some of the shocking videos in a warning to other users.

“This trend is not funny. Y’all are not funny. DV [domestic violence] isn’t a joke, y’all are sick,” Bekah Day captioned in a TikTok montage with more than 403,000 views on the platform. Her roundup also includes screenshots of recent news articles that correspond with each of the horrifying tales shared as part of the trend, demonstrating the scourge of domestic violence in the US.

Some 24 people in the US will be the victims of rape, physical violence or stalking by a romantic partner every 60 seconds, according to the Domestic Violence National Hotline.

“Misogyny has no place on TikTok,” a spokesperson for TikTok told Newsweek in a statement. “Content that promotes hateful behavior and violence against women goes against everything we stand for as a safe and inclusive platform and will be removed.”

Users who commented on Day’s post echoed her disappointment.

“Thank you for putting real-life context to this sick trend. ‘It’s not that deep’ …no, actually it is,” wrote Polly Poison.

“We do imagine,” said an anonymous user with a woman’s perspective, and pointed at the data. “Every time we leave the house/meet a male. We already imagine. Apart from its not imagination, its statistics-based fear.”