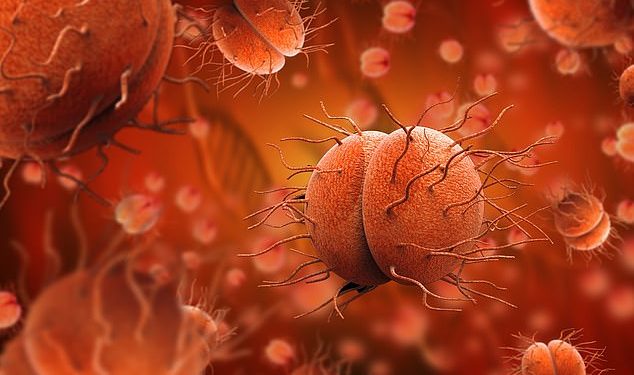 Treatments against the common sexually transmitted infection (STI) are becoming less effective due to the over-prescription of antibiotics.

It has become resistant to all but one class of antibiotic and the lack of a vaccine has raised fears the STI could become untreatable in the future.

But three studies, in The Lancet Infectious Diseases, suggest that the meningitis jab 4CMenB could reduce gonorrhoea rates by up to a third.

The research, carried out by academics in the UK, US and Australia, looked at young adults and gay men, who are most at risk of the STI.

4CMenB was known to protect against the STI but until now there had not been any research into what effect the jab would have at a population level.

Experts say cross-protection is possible due to the large genetic match between the bacteria that cause gonorrhoea (Neisseria gonorrhoeae) and meningitis (Neisseria meningitidis).

Around 70,000 people in England and 800,000 in the US are diagnosed with the STI every year. If untreated, it can lead to infertility in women. 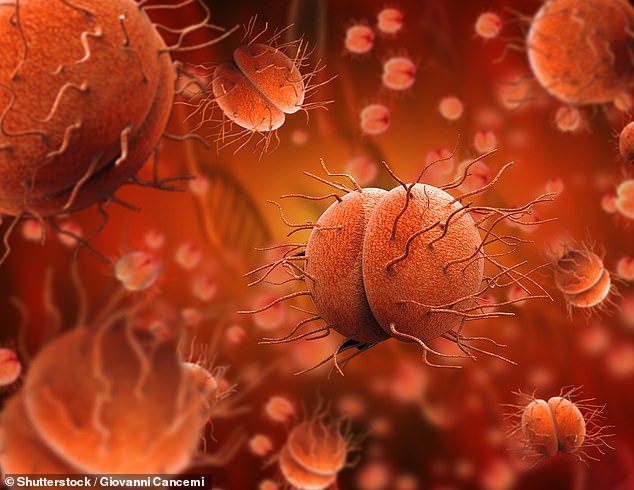 Treatments for gonorrhoea, which the World Health Organization estimates there are 78million cases of every year, are becoming less effective. The infection, which is the most antibiotic-resistant STI and second most common one in the UK, is usually tackled with a single antibiotic injection that improves symptoms within a few days. But since treatment became available in the early 1900s, its effectiveness against the bacteria that causes the infection — Neisseria gonorrhoeae — has dropped. Pictured: Neisseria gonorrhoeae graphic

Gonorrhoea — which infects 80million people a year and kills around 2,000 — is usually tackled with a single injection of antibiotics which improves symptoms within a few days.

But the infection has progressively evolved to become resistant to the primary class of antibiotics used to treat it — fluoroquinolones.

Public health chiefs are worried if a new super-strain emerges that can also evade cephalosporin antibiotics, then the infection could become untreatable.

In one of the latest studies, researchers at the US Centres for Disease Control and Prevention (CDC) examined meningitis vaccination and STI rates among 110,000 16 to 23-year-olds in New York City and Philadelphia.

The team found 7,692 people were vaccinated with 4CMenB, with around half having had one dose and the others being double-jabbed.

The bacteria is mainly found in discharge from the penis and vaginal fluid.

It is easily passed between people through unprotected sex and from pregnant women to their babies.

The bacteria can infect the cervix, urethra, rectum, throat and eyes.

Left untreated, gonorrhoea can cause infertility in both men and women.

Symptoms usually appear within 10 days of exposure. But around half of women and 10 per cent of men have no symptoms.

Signs of the virus include a yellow, white or green discharge from the vagina or penis and a burning feeling while urinating. Women may also experience bleeding between periods while men may have a swollen foreskin.

Among women, symptoms can include a change in discharge, a burning feeling when urinating and bleeding between periods.

People can get tested at sexual health clinics.

It is treated with a single antibiotic injection in the buttocks or thigh which usually improves symptoms within a few days.

Dr Winston Abara, from the CDC’s STI prevention unit and study leader, said: ‘Our findings suggest that meningitis vaccines that are even only moderately effective at protecting against gonorrhoea could have a major impact on prevention and control of the disease.

‘Clinical trials focused on the use of 4CMenB against gonorrhoea are needed to better understand its protective effects and could also offer important insights towards the development of a vaccine specifically for gonorrhoea.’

A second group of researchers at the University of Adelaide examined the effectiveness of 4CMenB vaccination against meningitis and gonorrhoea.

South Australia has an ongoing 4CMenB vaccination rollout to infants, children and adolescents, which saw 53,000 people jabbed in the first two years.

The team compared gonorrhoea and chlamydia rates among those jabbed to estimate whether the jab drove down infection numbers.

The team found the vaccines were 33 per cent effective in preventing infection.

It sheds light on both the vaccine’s effectiveness against meningitis in children and adolescents, as well as gonorrhoea in adolescents and young people, she said.

A third set of findings from researchers at Imperial College London show that giving those most at risk of gonorrhoea the meningitis vaccine could drive down rates of the STI nationally and save millions of pounds.

The researchers compared projected gonorrhoea infection rates to the cost to the health service if gay men were vaccinated and vaccinating all men.

The results showed vaccinating men who have sex with men would lead to roughly 110,000 fewer cases and save £8million over 10 years.

Professor Peter White, a public health modelling expert who led the study, said: ‘With a gonorrhoea-specific vaccine likely to take years to develop, a key question for policymakers is whether the meningitis vaccine 4CMenB should be used against gonorrhoea infection.

‘Our analysis suggests giving the vaccine to those at the greatest risk of infection is the most cost-effective way to avert large numbers of cases.’

The 4CMenB jab has been given out routinely to infants in the UK since 2015.