Menopausal women taking HRT to relieve their hot flushes and mood swings do NOT face a higher risk of dementia, major study claims

Drugs given to menopausal women do not increase the risk of developing dementia, according to a new study.

Hormone replacement therapy (HRT) helps to relieve symptoms of the menopause, such as hot flushes, night sweats and mood swings.

In recent years, fears the common drugs may lead to dementia have been raised in numerous studies.

But researchers have now dismissed the link after analysing data from hundreds of thousands of British women.

Results showed women on HRT were no more likely to develop dementia overall.

Experts from the universities of Nottingham, Oxford and Southampton even found oestrogen-only treatment reduced the risk of the memory-robbing disorder.

On the other hand, a combined oestrogen-progestogen therapy slightly raised the risk of Alzheimer’s — the most common form of dementia. 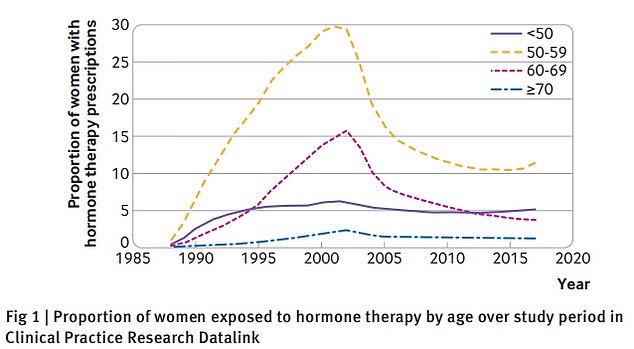 The graph shows the proportion of women prescribed hormone therapy from the earliest available records. Only one per cent of women were receiving the treatment in 1988, which then rose consistently to reach a peak by 2000 of 30 per cent for women between 50 and 59 years of age. But it subsequently fell from 2003 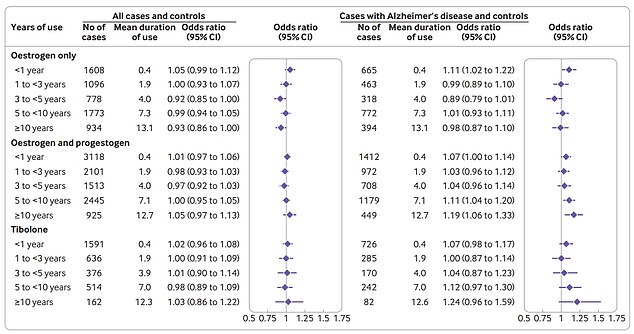 The graph shows the risk of developing Alzheimer’s among women who took different forms of hormone therapy: oestrogen, a combination of oestrogen and progestogen and tibolone, a medicine that’s similar to combined HRT. It shows women who took oestrogen and progestogen or tibolone were at a slightly increased risk of developing Alzheimer’s and this risk increased the longer they took the medicine for

All you need to know about the menopause

Menopause is when a woman stops having periods naturally and is no longer able to get pregnant naturally.

It is a normal part of ageing and usually happens between the ages of 45 and 55 when a woman’s levels of the sex hormone oestrogen drop.

Women are advised to see their GP if their symptoms are difficult to manage.

Treatments doctors can provide include hormone replacement therapy, such as tablets, skin patches and gels that replace oestrogen.

HRT relevies most menopausal symptoms and can also prevent bones from weakening.

However, women who take HRT for more than one year have a higher risk of breast cancer compared to women who never had the treatment.

Its side effects include breast tenderness, headaches, nausea and stomach pain.

Menopause occurs when a woman stops having periods, so is no longer able to get pregnant naturally.

During this period, which usually occurs between the ages of 45 and 55, oestrogen levels plummet.

Sex hormones, particularly oestrogen, protect the brain, so academics have long speculated that dropping levels may contribute to developing diseases such as dementia.

But studies have been inconsistent on whether HRT — usually given in tablets, gels and patches — increases the risk of developing dementia.

The team of researchers, whose findings were published in the British Medical Journal, investigated the risk of developing dementia for women using any HRT treatments commonly prescribed by the NHS.

This was then compared to the record of nearly half a million women who did not have dementia.

In both groups, 14 per cent of women had been given HRT therapies.

Overall, no increased risks of developing dementia associated with HRT were seen, regardless of what type was prescribed.

Authors also claimed the risk of dementia was also not impacted by how long HRT was taken or the treatment dose.

Researchers said the study provides the most detailed estimates of risk for individual treatments.

And writing in the journal, the team claimed the findings offer ‘new, more reliable estimates for doctors and their patient’.

‘At least 5 fireballs’ reported over US

‘At least 5 fireballs’ reported over US