Men’s N.C.A.A. Tournament: Houston Advances to Round of 16 – The New York Times 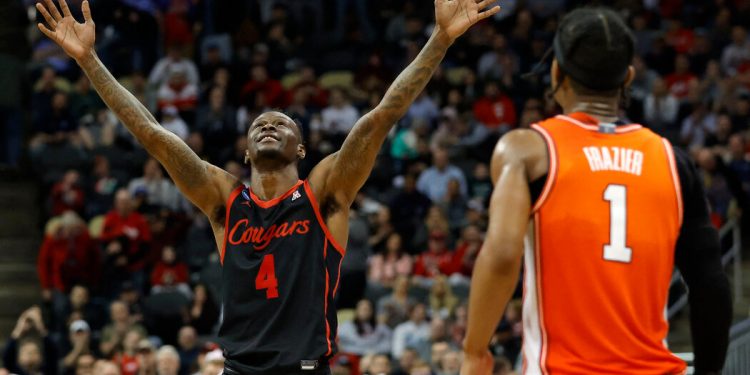 Some of the N.C.A.A. men’s basketball tournament’s best moments are birthed from classic David and Goliath matchups. The Goliaths, those powerhouse programs that make deep tournament runs seem routine, meet the Davids, the upstart challengers that many college basketball fans know nothing about until March.

This matchup between the No. 2 seed Duke and the No. 7 seed Michigan State instead offered a classic Goliath versus Goliath: One college basketball juggernaut against another. Two revered coaches, the Blue Devils’ Mike Krzyzewski, and the Spartans’ Tom Izzo, facing each other one final time. And in a game befitting the careers of two coaches who have been among the faces of their sport for decades, Duke outlasted Michigan State, 85-76, in the round of 32, extending its season and the career of the man nicknamed Coach K for at least one more game.

For now, Krzyzewski’s farewell tour remains intact. On its way to the tournament, Duke clinched the Atlantic Coast Conference’s regular-season title, but then lost to rival North Carolina in Krzyzewski’s final home game. It lost again to Virginia Tech in the A.C.C. tournament final in Brooklyn before dominating Cal State Fullerton in the first round and holding off Michigan State on Sunday night.

With six minutes left, the game was tied at 65. Michigan State’s Marcus Bingham Jr., who had been so good all evening, nailed a 3-point jumper amid a 9-0 Spartans run, which led to a 5-point lead. But Duke, making plays on both ends of the floor, with a pair of blocks and a steal on defense, regained the lead for good with less than three minutes left.

For 40 minutes, the two teams swung at each other. Michigan State, with its stifling defense, cut off the Blue Devils’ driving lanes, forcing jump shots, and Duke happily obliged.

The Blue Devils countered the Spartans’ early lead by getting their best players going. Paolo Banchero, Duke’s all-American freshman forward, had 13 points by halftime. Banchero attacked the Spartans’ interior defense with his towering 6-foot-10 frame and finished with 19 points.

But the Spartans matched Duke’s intensity by proving as fiery on the court as their veteran coach, whose wide-legged stance on the sideline could not be missed. Gabe Brown, Michigan State’s senior forward, had 14 points in the first half, including three baskets from beyond the arc.

Dive Deeper Into the N.C.A.A. Tournaments

After relinquishing an early lead and allowing Banchero and center Mark Williams to get shots in the post, Michigan State matched the Blue Devils’ 3-point shooting. The teams swapped 3-pointers on five straight possessions to end the first half.

In the second half, Duke players muscled their way to the glass to score inside. But Michigan State kept climbing back, not letting the Blue Devils get comfortable until the final free throws to put the game away.

And Duke, the team with the coach with the most wins in Division I basketball history and Final Four potential, was the Goliath that would not fall.

A remade Houston team is making another run.

One year after reaching the Final Four of the N.C.A.A. men’s basketball tournament, Houston is making another run. This time, it is doing it with five new starters and an overhauled roster.

The Cougars, a No. 5 seed, advanced to the round of 16 for the third straight tournament with a 68-53 victory over fifth-seeded Illinois on Sunday afternoon in Pittsburgh. Houston, which lost in last year’s national semifinals to the eventual national champion, Baylor, advanced to meet the winner of Sunday night’s game between No. 1 Arizona and No. 9 Texas Christian in the South regional.

“I just think these guys stand on the shoulders of all those players that came before them,” Houston Coach Kelvin Sampson, who advanced to the round of 16 for the sixth time in his career, said in a television interview. “They believe in our culture. We talk about watering trees. We don’t water leaves; we water roots, and the roots in this program is our culture, and every one of these kids buys into it. That’s why we’re successful.”

Houston (31-5), the American Athletic Conference tournament champion, had not beaten a single-digit seed in the tournament since the 1984 Final Four, when Hakeem Olajuwon and Clyde Drexler were the Cougars’ stars. Illinois (23-10) lost in the second round for the second straight year after being among the top seeds. In 2021, it was upset by Loyola Chicago as a No. 1 seed.

Three of last year’s Final Four teams have advanced to the round of 16, with Gonzaga and U.C.L.A. having won Saturday. Baylor lost Saturday to North Carolina, meaning the defending champion has now lost before the round of 16 for five years straight.

Sampson lost all five of last year’s starters, who either moved on or suffered injuries. Quentin Grimes, a key player on last year’s team, now plays for the Knicks. The junior guard Marcus Sasser, who scored 20 points in last year’s national semifinal, went down with a season-ending injury, as did the sophomore guard Tramon Mark.

Still, Houston has maintained its trademark defensive intensity, and it often seems as if it has seven defenders on the floor instead of five. The Cougars limited Illinois to 34 percent shooting from the field. Houston used an 11-0 run to go ahead, 65-49, and put the game out of reach.

Offensively, the senior guard Taze Moore was terrific in the open court, finishing with 21 points and 7 rebounds. Jamal Shead scored 18 and Kyler Edwards, a member of Texas Tech’s 2019 Final Four team, had 15 points, 6 rebounds and 4 assists.

Collin Gillespie guides Villanova back to the round of 16.

Villanova point guard Collin Gillespie was heartbroken a year ago when he missed the N.C.A.A. tournament after a medial collateral ligament tear in his left knee in early March.

A 6-foot-3 Pennsylvania native, he opted to return to Villanova for a fifth season after the N.C.A.A. granted a waiver to all players in the wake of the pandemic, and now he is making the most of his final season.

After leading the Wildcats to their sixth Big East tournament championship, Gillespie had 20 points and 4 assists to guide second-seeded Villanova into the round of 16 for a second consecutive season with a 71-61 victory over seventh-seeded Ohio State in Pittsburgh. Gillespie’s assist to Eric Dixon led to a 3-pointer that put Villanova ahead, 67-59, with 1 minute 38 seconds remaining after Ohio State had come within 2 points. He hit two free throws in the final seconds to secure the victory.

“It means everything, it’s part of the reason why I came back,” Gillespie said in a television interview after the Big East tournament. “Not being able to play with those guys last year hurt. But I’m just happy I’m able to play with these guys back on the floor, postseason especially.”

The fifth-year senior Jermaine Samuels had 17 points and 8 rebounds, and Caleb Daniels added 11 points and 8 rebounds for Villanova, which has won seven straight games and 12 of its last 13. The Wildcats (28-7) will next face No. 11 Michigan (19-14) in a South regional game on Thursday in San Antonio.

Under the Hall of Fame coach Jay Wright, Villanova won N.C.A.A. titles in 2016 and 2018, the latter when Gillespie was a freshman. He and the Wildcats remain alive for what could be the program’s third championship since 2016.

Gillespie has been the face of the program for the last several years and now ranks 13th in program history in points and 10th in assists.

Ohio State’s E.J. Liddell had 17 points, 6 rebounds and 3 assists in what was likely his final college game before he heads to the N.B.A. draft. The Ohio State freshman guard Malaki Branham, a borderline first-round N.B.A. pick, had a stellar performance with a game-best 23 points, including 3 of 8 from beyond the arc.

China has yet to condemn Russia's invasion of Ukraine