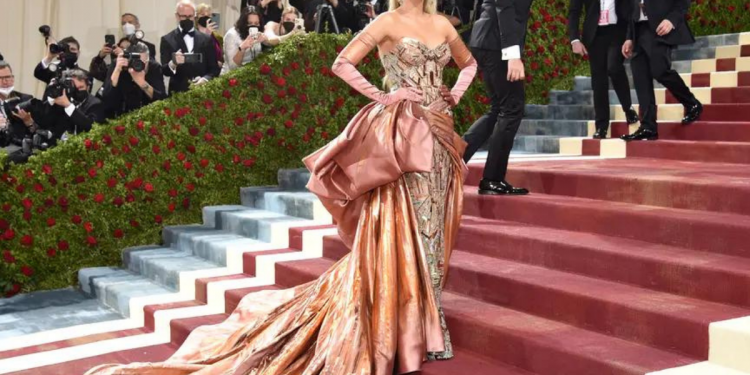 The Met Gala returned last night with the theme ‘Gilded Glamour’, a homage to the extravagance and creativity of the Gilded Age, roughly between 1870 and 1890.

This year saw Blake Lively co-host alongside her husband Ryan ReynoldsRegina King and Lin-Manuel Miranda, and as always the star pulled out all the stops to wow on the red carpet.

Already wowing in her outfit, Lively’s dress then transformed into a new look. An aqua colour brought the skirt alive.

She later explained the transformation was a nod to ‘patina’ – the green film that forms when copper oxidised.

Fans went wild for Lively’s look and transformation of outfit, but especially the reaction of her husbandRyan Reynolds.

The Wrexham AFC co-owner was captured watching Lively on the red carpet in awe as she revealed her second look.

The actor was seen with a beaming smile and clapping from further up the red carpet.

His reaction prompted further fan praise for the celeb couple, with many taking to Twitter to share their response.

“Find yourself someone that looks at you the way Ryan Reynolds looks at Blake Lively”, one user tweeted alongside the clip.

The pair’s outfits also received the seal of approval from the official Metropolitan Museum of Art Twitter account, sharing a picture of the couple writing: “Now *that’s* gilded glamour!”

A new approach to improve the power control of wind farms