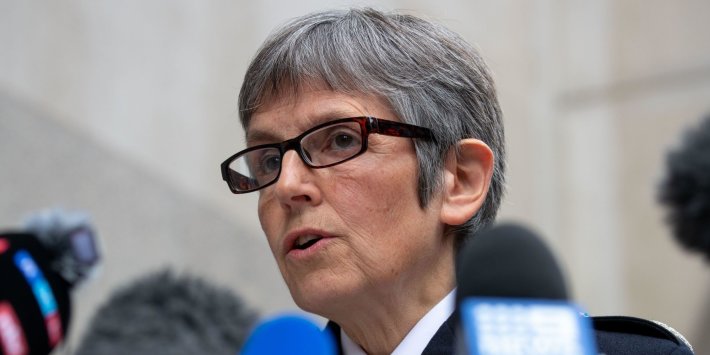 Police will now investigate allegations a number of parties were held in Downing Street during lockdown in breach of coronavirus rules, the Metropolitan Police commissioner has confirmed.

Dame Cressida Dick told the London Assembly this morning that, because of information provided by the current Cabinet Office inquiry led by Sue Gray, officers will now investigate the reported gatherings.

She said the force has “not normally investigated breaches of the regulations when they’ve been reported long after they are said to have been taken place”, saying it would “not normally be a proportionate use of officers’ time”.

Dick added: “But I can tell you this morning as a result, firstly of the information provided by the Cabinet Office inquiry team, and secondly, my office’s own assessment, can confirm that the Met is now investigating a number of events that took place at Downing Street and Whitehall in the last two years, in relation to potential breaches of Covid-19 regulations.”

The Metropolitan police have previously come under heavy criticism for not launching a criminal investigation despite numerous reports of gatherings in both 2020 and and 2021.

Officers have instead been said to have given evidence to Gray, the senior civil servant who is compiling a report into the allegations.

Her findings had been due to be published this week, but its now understood she will wait until the Met investigation has concluded before sharing her report.

The government has previously indicated any criminal proceedings would take precedent over her inquiry.

In a statement, the Cabinet Office said Gray’s inquiry would be “continuing” while the Met Police conducted its investigation, and there was “ongoing contact” with the force.

There is no indication when either the police investigation or Gray’s inquiry are expected to conclude.

“I can confirm that the Met is now investigating a number of events that took place at Downing Street and Whitehall.”

Met Police Commissioner Cressida Dick confirmed that the force will be investigating reports of “potential breaches of Covid-19 regulations” at No 10 pic.twitter.com/rwizLVDOsy

Speaking at City Hall in front of the London Assembly’s Police and Crime Committee this morning, Dick said that the decision to retrospectively investigate Downing Street lockdown breaches did not mean that “fixed penalty notices will necessarily be issued in every instance and to every person involved”.

“We will not be giving a running commentary on our current investigations,” she added.

Dick did indicate that there will be updates at “significant points”, but suggested not all of the alleged parties are being looked into by officers. She said “several other events” that appeared to have taken place in Downing Street and Whitehall had been assessed but were not thought to have reached the threshold for investigation.

In a statement, the Met Police confirmed they had decided to open an investigation “following detailed assessments” of the “outline findings” provided to them by the Cabinet Office.

“Where multiple events occurred on a particular date at a location, all the events on that date will initially fall within the remit of the investigation so that the full circumstances can be established. This does not mean that everyone who attended an event will be investigated,” the statement said.

The force has reportedly written to the Cabinet Office to request that “all relevant information gathered from its inquiry” is provided to the police.

Labour’s Deputy Leader Angela Rayner has been granted an Urgent Question in the Commons later today to ask the government to respond to the announcement from the Met police. Paymaster General Michael Ellis will provide a response on behalf of the government.

Rayner said Labour “welcome” the police investigation, and added that Johnson should consider his position.

“With Boris Johnson’s Downing Street now under police investigation, how on earth can he think he can stay on as Prime Minister?,” Rayner said.

“Millions of people are struggling to pay the bills, but Boris Johnson and his government are too wrapped up in scandal to do anything about it.

“Boris Johnson is a national distraction. Conservative MPs should stop propping him up and he should finally do the decent thing and resign.”