Meteorites could have brought all 5 genetic letters of DNA to early Earth – Space.com 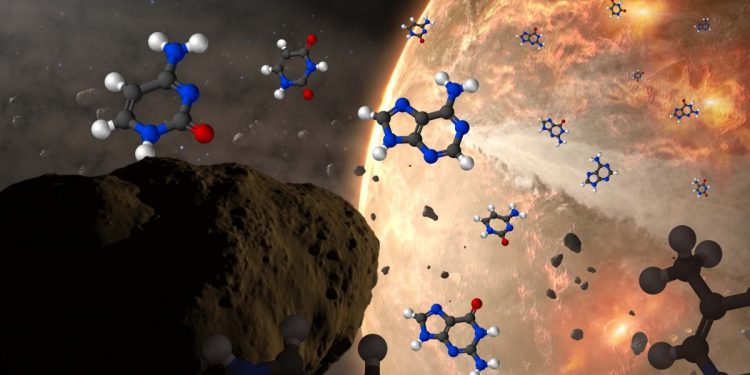 Key building blocks of DNA that previous research mysteriously failed to discover in meteorites have now been discovered in space rocks, suggesting that cosmic impacts might once have helped deliver these vital ingredients of life to ancient Earth.

DNA is made of four main building blocks — nucleobases called adenine (A), thymine (T), cytosine (C) and guanine (G). DNA’s sister molecule, RNA, also uses A, C and G, but swaps out thymine for uracil (U). Scientists wondering whether meteorites might have helped deliver these compounds to Earth have previously looked for nucleobases in space rocks, but until now, scientists had only detected A and G in space rocks, and not T, C or U.

Related: How did Earth form?

It was long a mystery why only purines, not pyramidines, were seen in meteorites. Prior lab experiments simulating conditions in outer space suggested that both purines and pyramidines could have formed during light-triggered chemical reactions within interstellar molecular clouds, and that the compounds could then have been incorporated into asteroids and meteorites during the formation of the solar system. Such chemical reactions may have also happened directly within the space rocks.

Now, scientists have finally detected all the pyramidines and purines found in DNA and RNA in meteorites that made it to Earth.

“The presence of the five primary nucleobases in meteorites may have a contribution to the emergence of genetic functions before the onset of life on the early Earth,” study lead author Yasuhiro Oba, an astrochemist at Hokkaido University in Japan, told Space.com.

The researchers employed state-of-the-art analytical techniques originally designed for use in genetic and pharmaceutical research to detect tiny amounts of nucleobases, down to range of parts of per trillion. This is at least 10 to 100 times more sensitive than prior methods that attempted to detect pyramidines in meteorites, Oba said.

The scientists analyzed samples from three carbon-rich, or carbonaceous, meteorites that prior work suggested could have hosted the kinds of chemical reactions that created nucleobases — the Murchison, Murray and Tagish Lake meteorites.

The scientists detected T, C and U at levels of up to a few parts per billion within the meteorites. These compounds were present at concentrations similar to those predicted by experiments replicating the conditions that existed prior to the formation of the solar system. In addition to the crucial T, C and U compounds, the scientists also detected other pyramidines not used in DNA or RNA that further show meteorites’ ability to carry these compounds.

“Due to our findings, we can say nucleobases also show wide varieties in carbonaceous meteorites,” Oba said.

It remains uncertain why pyramidines were so much less abundant in these meteorites than purines. Oba suggested a clue might lie in the fact that purines include a pentagonal ring known as imidazole, whereas pyramidines do not.

Imidazole and similar molecules proved far more abundant than pyramidines in these meteorites, suggesting they might prove easier for naturally occurring chemical reactions to synthesize. In addition, imidazole can act like a primitive catalyst to set off chemical reactions, such as forming purines instead of pyramidines.

The scientists detailed their findings online April 26 in the journal Nature Communications.

Watch a bus-sized asteroid safely zoom past Earth within the moons orbit – Space.com