One of Britain’s biggest investment managers will today reveal that it is launching a £5billion fund to invest in private firms, mainly in this country, which are pioneers in creating new green and sustainable technologies and enterprises.

The project, code-named Catalyst, will sit inside M&G’s £50billion Pru Fund, which has 5m customers in Britain and across the globe.

The new fund forms part of a strategy by M&G chief executive John Foley to convert the fund manager’s huge £350billion of assets under management on to a more sustainable basis. 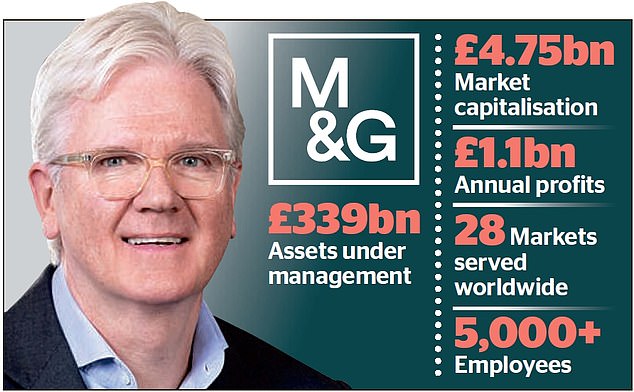 Foley and his team at M&G are developing a platform using artificial intelligence which will seek to monitor, analyse and capture data on compliance by companies in which it is invested on environmental, social and governance criteria.

In M&G’s discussions with such firms, it will demand a flight path to a more sustainable future.

‘If they are not doing a good job we will let them know,’ Foley told the Daily Mail.

He added that he was prepared to sell ‘the laggards.’

The £5billion fund will sit within the Private & Alternative Assets portfolio at M&G.

Foley, 62, had intended to plot a new course for M&G last year in the aftermath of the split from the Prudential in 2019, which saw the rapidly growing Asian and North American businesses float off as a separate company.

M&G maintained responsibility not just for the retail funds, which carry the M&G name, but also the actively managed Pru Fund as well as legacy life insurance and pensions assets, some of which date back more than a century.

The launch of the proposed new sustainable direction for the group was delayed by the pandemic, but is due to be unveiled to retail and institutional investors today.

The hope is that M&G can both capture the move towards ESG investing and vacuum up some of the savings built up household bank accounts during the pandemic.

At the core of the new approach will be the £5bn Catalyst fund, which Foley describes as ‘a fair chunk of money’.

The chief executive has created a team of 25, drawn from existing employees, to run the new venture.

Foley plans for the fund to be ‘UK focused’ as Boris Johnson’s government goes full steam ahead on climate change with the goal to going electric on the roads by 2030 and being carbon neutral by 2050.

But it will also be scouring the world for green investment opportunities and will be opening offices in Singapore, Mumbai and New York with the aim of finding promising technologies overseas.

Foley also views sustainable social housing projects as a potential source for future investment. ‘Many of the most attractive opportunities to do this are in private assets – new and existing platforms which are not listed on an exchange,’ he will tell investors and customers.

‘As a cornerstone investor in such enterprises, M&G can have a much greater influence in supporting their growth and sustainability than we can in public markets.’

The intention is that once the project is up and running, retail investors will eventually be able to gain direct access to the group’s green expertise through the launch of new open funds.

The M&G share price has fallen heavily since the start of the pandemic, but has recently shown signs of recovery and stood at 187 last night, up 2.3 per cent.

The company is understood to have suffered some outflows from retail funds during Covid-19, but institutional investment in Pru Fund assets by pension funds and others has been strong.

Foley believes M&G is in the unusual position of being able to take a more radical approach to investment as it is both an active manager and in charge of its own very substantial pool of assets.