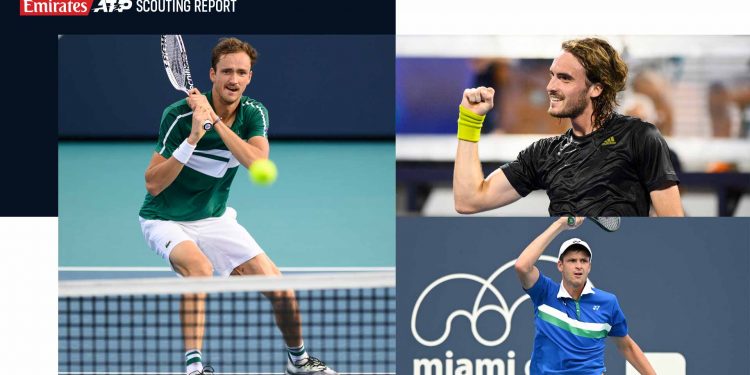 
The Sunshine Double moves from the California desert in Indian Wells to its second stop in tropical south Florida this week as the ATP Masters 1000 action continues at the Miami Open presented by Itau.

The Florida sun will shine on 18 of the Top 20 players in the ATP Rankings at the outdoor hard-court event, being held for the fourth time at Hard Rock Stadium. Daniil Medvedev, Stefanos Tsitsipas and Matteo Berrettini will all be bidding to win their first tour-level title of the season in Miami, while Hubert Hurkacz returns as the reigning champion.

ATPTour.com looks at 10 things to watch this week.

1) Hard Rock Stadium Plays Host: The Miami Open has well and truly settled into its new home in Miami Gardens since moving there in 2019. While Hard Rock Stadium is well-known for most of the year as the home of the NFL’s Miami Dolphins, tennis takes over this week as the ATP’s top stars arrive for the second ATP Masters 1000 event of the year.

Tennis fans, we are ready for YOU! 👊 pic.twitter.com/nKiNVUgkkz

2) Chance For Medvedev To Reclaim No. 1: Daniil Medvedev’s stay at the top of the ATP Rankings may have only lasted three weeks, but the 26-year-old can haul himself back to top spot with a semi-final run in Miami. That would represent his best performance at a tournament where he only reached the quarter-finals for the first time in 2021, losing out to Roberto Bautista Agut in straight sets.

3) Can Rublev Rouse Another Winning Run?: Despite having his 13-match winning streak snapped by Taylor Fritz in the semi-finals in Indian Wells, Andrey Rublev’s showing in California once again showed he is ready to go deep at the biggest events on Tour. In 2021 Miami was where the World No. 7’s upturn in Masters 1000 form began, as he advanced to his first semi-final at that level without dropping a set before falling to eventual champion Hubert Hurkacz.

4) Hurkacz Defends Title: Hubert Hurkacz announced himself in the Top 20 of the ATP Rankings after beating Jannik Sinner to secure his maiden Masters 1000 title in Miami a year ago. The Pole has since cemented his reputation as a serious threat at big tournaments, reaching the semi-finals at Wimbledon and the Rolex Paris Masters, but he begins his defence hunting a first title of 2022.

5) Top 10 Stars Bring The Heat: Stefanos Tsitsipas will seek to turn his solid start to the season into something more spectacular in Miami. The World No. 5 has reached a final and two semi-finals in 2022 after his rapid recovery from elbow surgery, a turnaround he described as ‘a miracle’. The Greek reached the quarter-finals in 2021, his best showing in Miami, before losing out to eventual champion Hurkacz.

World No. 4 Alexander Zverev is also hunting a first title of the year, but Felix Auger-Aliassime finally broke his trophy duck at the Rotterdam ATP 500 event in February and will see Miami as an obvious place to repeat the trick at an even higher level – his best Masters 1000 showing is a semi-final run there in 2019. On the other side of the coin is Matteo Berrettini, whose only previous appearance at Hard Rock Stadium in 2019 ended in first-round defeat to Hurkacz.

Miami Open Presented By Itau: Draws, Dates, History & All You Need To Know

6) Alcaraz Hunts Maiden Miami Win: A year ago, a No. 132-ranked Carlos Alcaraz made his ATP Masters 1000 debut in Miami, losing out in a tight three-set defeat to Emil Ruusuvuori. Since then, the young Spaniard has sent shockwaves around the world with a string of sensational performances, most recently in reaching a first Masters 1000 semi-final in Indian Wells. Alcaraz not only looks a strong chance to clinch his first match win in Miami this year, but on current form he may make a bold run at the title.

7) Can #NextGenATP Stars Follow Alcaraz’s Lead?: Sebastian Baez and Juan Manuel Cerundolo will hope to impress fans on debut at Hard Rock Stadium, while Brandon Nakashima will also feature in the main draw for the first time.

The locals are already more than familiar with #NextGenATP alumni Sebastian Korda. The Florida native stormed to the quarter-finals on his Miami debut in 2021, and showed he is a threat to anyone on Tour after coming within a game of being the man to end Rafael Nadal’s unbeaten start to the season in Indian Wells.

8) Wild Card Danger From Kyrgios, Murray: Nick Kyrgios looked back to his best in reaching the quarter-finals in Indian Wells and the Australian will be confident of building on that showing after receiving a wild card for a tournament where he has reached the semi-finals twice.

He is joined in the draw by a pair of dangerous British wild cards: former World No. 1 and two-time Miami champion Andy Murray and 20-year-old Jack Draper, who has already clinched three ATP Challenger Tour titles in 2022.

9) Fritz Leads American Charge: Taylor Fritz arrives in Miami off the back of a dream run in Indian Wells where he soared to his first Masters 1000 crown, ending Rafael Nadal’s unbeaten start to the season in the final. The 24-year-old will now be keen to get to work improving his record in Miami, where he has made the third round just once in five appearances. He could ask his countryman John Isner for some advice on how to win in Florida – the big-serving World No. 21 took the title in 2018, also reaching the final a year later.

10) Top Pairings Seek To Kick Start Season In Doubles: The three highest-ranked doubles teams all arrive in Miami trophyless in 2022. Nikola Mektic and Mate Pavic have the added incentive of defending their 2021 title, while Rajeev Ram and Joe Salisbury also enjoyed a strong run last year before falling to the Croatians in the semi-finals. Meanwhile, Spaniard Marcel Granollers and Argentine Horacio Zeballos have won four Masters 1000 titles since joining forces in 2019, but have never won a match together in Miami.