Michael Che has hit back at online criticism of a skit he wrote for last week’s Saturday Night Live after it was accused of misappropriating black culture.

The star took to Instagram Monday to defend the ‘Gen Z Hospital’ sketch, which featured guest host Elon Musk and other cast members using slang phrases as they sat in a waiting room.

Critics online slammed the script for having phrases from ‘African American Vernacular English’ (AAVE) spoken by the mostly white cast.

Che said in a since-deleted Instagram post that he had written the skit – and said he had never heard of the term AAVE before.

He wrote: ‘I’ve been reading about how my ‘gen z’ sketch was misappropriating AAVE. And I was stunned because what the f*** is AAVE?

‘I had to look it up. Turns out it’s an acronym for African American Vernacular English. You know, AAVE! That ol’ saying that actual Black people use in conversation all the time.’ 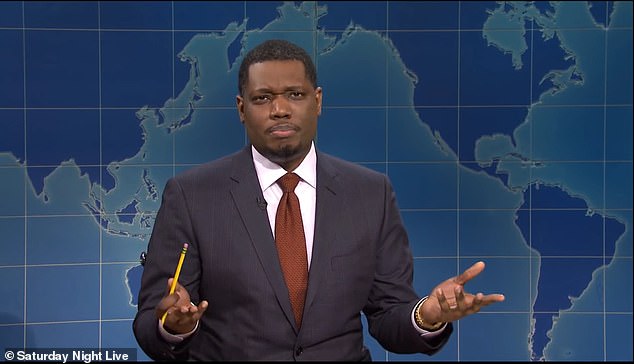 Michael Che, who co-hosts Saturday Night Live’s ‘Weekend Update,’ took to Instagram to respond to criticism over a skit he wrote for the May 8 episode 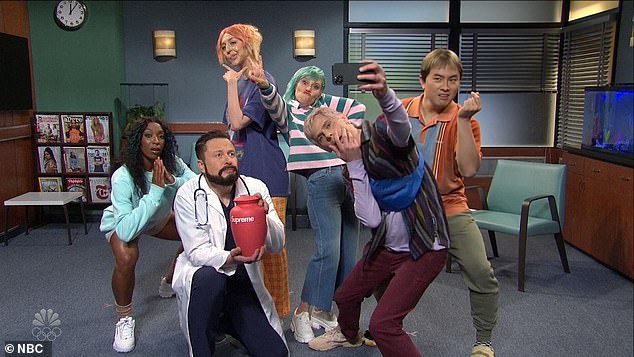 The ‘Gen Z Hospital’ skit featured cast members, most of whom were white, using terms associated with African American Vernacular English, like ‘cringe,’ ‘bro’ and ‘bestie.’

The skit featured Musk and cast members Kate McKinnon, Mikey Day, Heidi Gardner, Ego Nwodim and Bowen Yang in the waiting room of a hospital as they waited for news about Day’s mother’s condition.

It starts with Mikey Day’s character saying, ‘Bro, nobody’s telling us anything. Is bestie OK?’

When the nurse, played by Melissa Villasenor, tells them that she doesn’t have any news, Bowen Yang’s character says, ‘I’m so pressed right now’ and Heidi Gardner’s character said the doctor would ‘catch hands’ if he did not come out with information soon.

When the doctor, played by Musk, does come out, he tells the group, ‘What I have to say right now may be a little cringe.’

He said they tried everything they could in surgery and ‘it was a ‘sus’ for a while.’

When Gardener’s character asks if they could see the patient, Musk replies, ‘Not right now, bro, you know the vibes.’

To thank him, McKinnon tells Musk, ‘We stan you,’ to which Musk says, ‘I can only imagine the feels you’re going through right now.’

Those terms – as well as ‘go off,’ ‘high key’ and ‘fire,’ which are also used in the skit – are used in African American Vernacular English, prompting some on Twitter to claim Saturday Night Live was appropriating black culture. 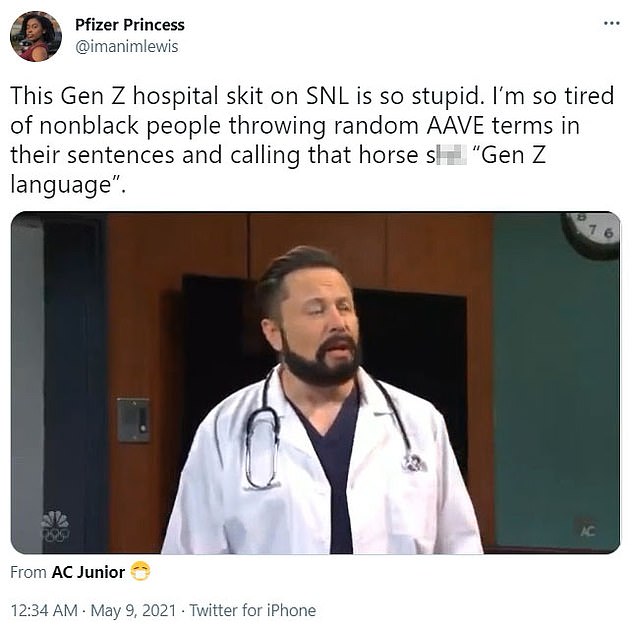 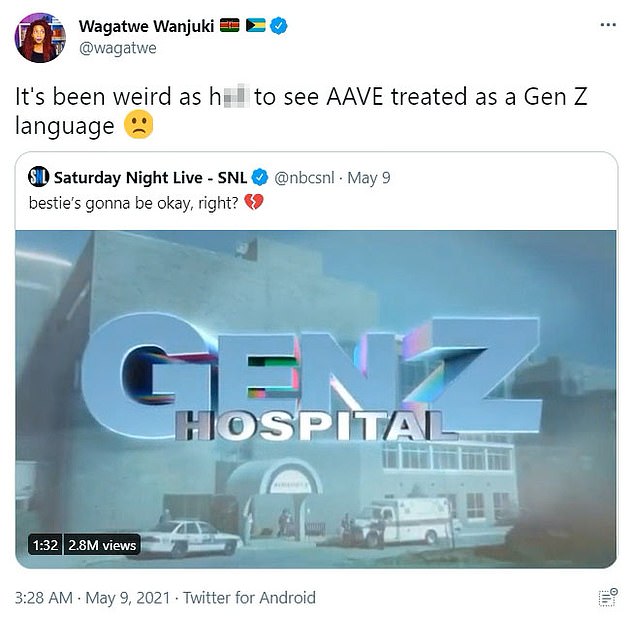 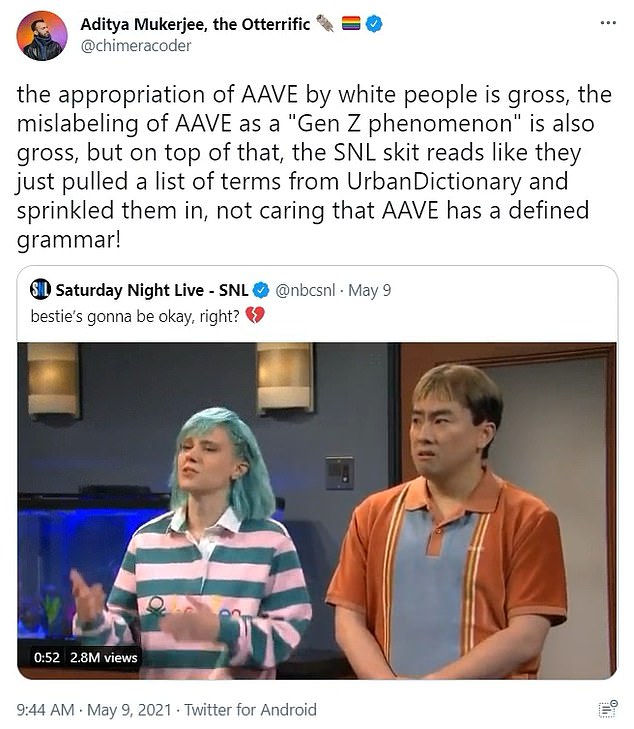 ‘AAVE is not = Gen Z,’ wrote one user, @magi_jay. ‘AAVE is a cluster of dialects in which there are generational differences, especially in vocabulary, just as there are within any dialect of a language.’

African American Vernacular English has its own grammatical features, and developed from a variety of cultural influences used by enslaved people, according to The Hill.

‘And most white Gen-Zers are not fluent in AAVE,’ @magi_jay continued. ‘This sounds like a bunch of people faking French accents.’

Another user, with the username JaLoni, tweeted, ‘I don’t watch SNL because it simply is not funny, but like … that skit is so troubling because AAVE is divorced enough from black people (through appropriation) that [it’s] ‘Gen Z language’ but not enough that black people are no longer being mocked.’

‘But on topo of that,’ she wrote, ‘the SNL skit reads like they just pulled a list of terms from Urban Dictionary and sprinkled them in, not caring that AAVE has a defined grammar.’

In response, Che wrote on Instagram, ‘Look, the sketch bombed, I’m used to that,’ according to People, captioning his post ‘if I could stop one person from calling everybody bro and bestie, im happy with that.’

Jenna Ortega Reacts To The Death Of The Original Wednesday Addams

Engineering Director Laid Off by Google Before Taking Kids to School

Jenna Ortega Reacts To The Death Of The Original Wednesday Addams

Engineering Director Laid Off by Google Before Taking Kids to School