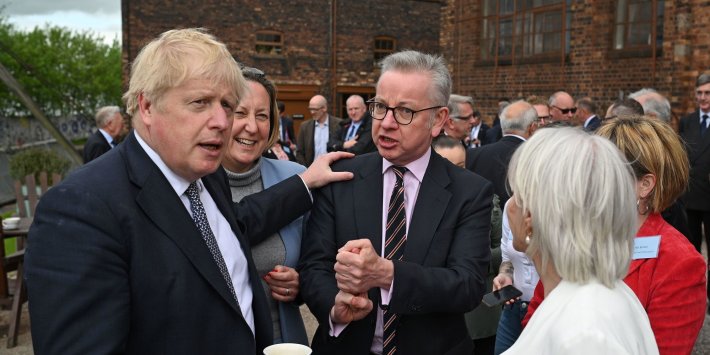 Boris Johnson has sacked Levelling Up Secretary Michael Gove as he vows to continue as Prime Minister despite most of his Cabinet and a growing number of Conservative MPs calling for him to quit.

In a shock move, the Prime Minister sacked the cabinet minister after he reportedly approached Johnson earlier today and encouraged him to resign.

It comes after a Downing Street source told PoliticsHome that Johnson is “fighting on”, setting up a fresh confidence vote in his leadership – potentially as soon as next week.

The source said the PM believed Tory MPs faced a choice – either a Summer of “navel gazing & uncertainty” in a leadership contest, or he and Zahawi “conquering” the cost of living together. Ministerial appointments are expected tonight.

The Prime Minister is in the most perilous moment of his leadership. Nearly 40 Conservative MPs had quit their government roles at the time of writing, including Rishi Sunak has resigned as Chancellor and Sajid Javid who resigned as Health Secretary.

The announcement was swiftly followed by the resignation of Jacob Young as Housing PPS.

I have agonised throughout today – I have supported the Prime Minister through thick and thin.

It’s because of my loyalty to him, that I urge him to now step aside and allow the country to move forward. pic.twitter.com/3pT7tlopTB

A “delegation” of Cabinet ministers had gone to Downing Street warning Johnson that they will resign if he does not quit. It included Nadhim Zahawi, who replaced Sunak as Chancellor last night, as well as Home Secretary Priti Patel, Transport Secretary Grant Shapps and Welsh Secretary Simon Hart.

Brandon Lewis, the Secretary of State for Northern Ireland and close ally of Johnson, also believes he must quit. A source close to him told PoliticsHome: “He believes the situation is now untenable and has made his views clear to the chief whip.”

Earlier tonight, the 1922 Committee of senior Tory MPs confirmed that an election will be held on Monday to determine its new membership. Anti-Johnson Conservative MPs are expected to take control of the committee, setting up a fresh vote of no confidence in the embattled Prime Minister.