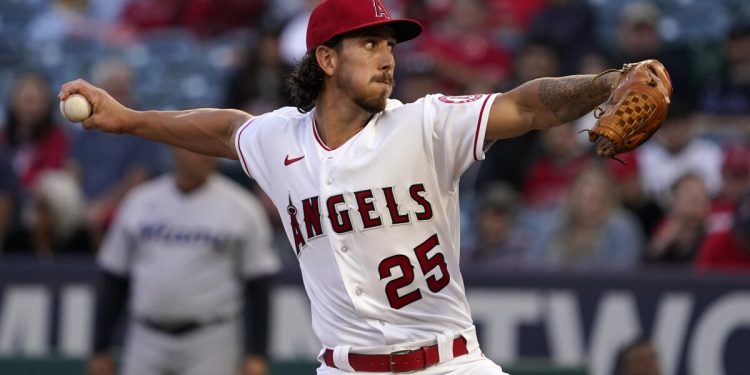 
Michael Lorenzen was not overcome with emotion when he took the Angel Stadium mound for his homecoming game Monday night, but it was definitely a different sensation than he felt in any of his previous 295 big league appearances.

Not only was the Orange County native and former Cal State Fullerton standout making his debut for the team he grew up rooting for, he was doing so as a starter after spending the last six seasons as a Cincinnati Reds reliever, with more than a dozen family members and friends watching from a dugout suite.

“I remember thinking I’m never gonna get this opportunity to make my first start for my hometown team in front of my family and friends, so just go for it,” Lorenzen said. “I told myself to attack, attack, attack … and thankfully, it worked out. It was a blast. It’s a dream come true, for sure.”

Lorenzen wasn’t just effective in a 6-2 victory over the Miami Marlins, he was dominant, giving up one run and two hits in six innings, striking out seven and walking none before a crowd of 20,480.

The 30-year-old right-hander retired the side in order four times and made one mistake, a 90-mph cut-fastball that Jesus Sanchez drove 439 feet for a solo home run to center field in the fourth.

Lorenzen maintained his stuff for the duration of his 89-pitch, 58-strike effort, showing exactly why the Angels believe he can make a successful transition from the bullpen to the rotation.

“Outstanding,” Angels manager Joe Maddon said. “I’ve seen him a lot in the National League, and I’ve never seen him start like that. Never seen him dominate like that. He had the hard sinker working. … Man, that bowling-ball sinker plays all the time. Those hitters don’t like that at all. No walks, seven punch. That’s a great first time out.”

The Angels played without center fielder Mike Trout, who was scratched because of the same stomach bug that sidelined him for two of the three exhibition games last week. Trout said he was feeling better after the game and hoped to play Tuesday.

Brandon Marsh moved from left field to center, and Jo Adell, who went hitless in nine at-bats with seven strikeouts against the Astros, showing an extreme vulnerability to breaking balls off the plate, moved into the lineup as the left fielder. Both youngsters delivered huge hits.

Marsh followed Shohei Ohtani’s leadoff single and Stassi’s two-out walk in the first by driving a first-pitch fastball from Marlins right-hander Elieser Hernandez 423 feet over the wall in center for a three-run homer.

Adell pushed the lead to 4-0 in the second when he crushed a 90-mph fastball from Hernandez for a solo homer to right-center, the ball leaving his bat at 109.7 mph and traveling 430 feet. Marsh and Adell each added RBI doubles in the eighth to make it 6-1.

“They’re very talented, there’s no question,” Maddon said of Marsh and Adell. “You put your scout’s cap on, and my goodness, that’s exactly what you’re looking for. Body, speed, strength, running ability … everything. They’re gonna get settled in. But they’re going to be really good major leaguers for a long time.

“They’re giving you flashes right now. We need to get their feet on the ground to the point where they can compete in really tight games and meaningful times of the year, that they can do things like tonight. That has to be nurtured. I don’t expect it overnight. You don’t turn battleships on a dime.”

Lorenzen appreciated spending the bulk of his start with a four-run cushion.

“That makes it easy for me to attack the zone right away,” he Lorenzen said. “When we’re up by three and I give up a solo homer, I give up a solo homer. It doesn’t matter, which I ended up doing, and because of the run support, it didn’t faze me one bit. So kudos to the young guys. They carried us today.”

Left-hander Aaron Loup replaced Lorenzen and retired the side in order on seven pitches in the seventh.

Right-hander Ryan Tepera struck out the side — all on 86-mph sliders — in the eighth, and closer Raisel Iglesias gave up a solo homer to Sanchez in the ninth.

Angels shortstop David Fletcher left the game in the seventh inning because of left hip tightness, the same injury that slowed him last week.

What bond market volatility means for equities and other asset classes

What bond market volatility means for equities and other asset classes