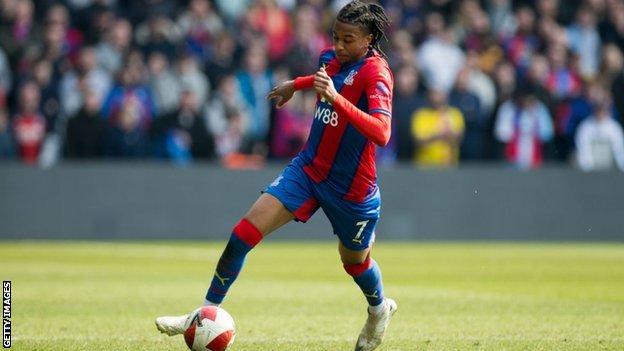 
Chelsea could face one of Europe’s most exciting young attackers at Wembley on Sunday – and they will hope they aren’t made to regret not snapping him up when they could.

Michael Olise, who is expected to recover from injury to start for Crystal Palace in Sunday’s FA Cup semi-final, was a member of Chelsea’s youth system before leaving aged 14.

The now 20-year-old is impressing on the Premier League stage, after a rather understated £8m move from Reading in the summer, with two goals and five assists in 22 appearances for the Eagles.

Born in Hammersmith to a Nigerian father and a French-Algerian mother, an international tug-of-war has ensued, but Olise opted to play for France – and was called up by Les Bleus’ Under-21s last month before being released with a foot problem.

His form has taken many by surprise this season, but he won’t be an unknown quantity for Chelsea.

‘He glided across the pitch’

Olise’s journey began when he met Sean Conlon, founder of a company called We Make Footballers, who work with talented children between the ages of four and eight.

“We had Michael when he was young but when he left Chelsea when he was 14, that was when we really got involved with him again,” Conlon tells BBC Sport.

“We were offering him support, working with him mentally and by giving him games.

“I played in a really tough, aggressive, seven-a-side league with all semi-pro players and we were short on players. I invited Michael, knowing he could cope, and he was the best player every week even at 14.

“He took it in his stride. He knows how good he is and he took to it naturally. People couldn’t believe he was 14. After the games, we’d meet the opposition and tell them his age. The look on their faces was hilarious.

“Michael can be so effective in an 11-a-side game at the top level, but if you put him in street football or cage football, he’ll stand out because he’s so gifted.”

Olise impressed first with his athleticism, before later learning to hone his skills in academies.

“When I first met him, he was playing for a team in Hayes when he was seven and I was a scout at QPR,” Conlon adds.

“He stood out with his athletic potential most of all. Technically, he was good, but I don’t think he’d had a huge amount of training at the time.

“It wasn’t that he was particularly big or strong; it was the efficiency of his movements. He was very elegant, a graceful runner. He glided across the pitch. There was ease about the way he did things.

“At the time he was just in at Arsenal. Then in the under-8s season he joined various development centres as well as us and he became more polished.”

Having spent seven years at Cobham and a short spell with Manchester City, Olise moved to Reading, where he played alongside Omar Richards, who eventually signed for Bayern Munich, and FC Porto’s Danny Loader, who was a member of the 2017 Under-17 England World Cup-winning side.

In 2019 Olise made his debut for the Royals, and went on to score seven goals in 67 Championship appearances before his switch to Selhurst Park in 2021.

Both of his named youth clubs, Arsenal and Chelsea, are reportedly tracking him now after an impressive breakout season in the Premier League. His rise has not surprised Conlon, who also works as a scout for the Blues.

“I always thought he belonged at a high level,” Conlon says.

“Even though there wasn’t always a pathway into the first team at Chelsea, there is a culture of belief in the academy. We knew there were players like Reece James and Mason Mount. It was only a matter of time until they broke through.

“His exit was mutual and what was best for Michael. He’s fulfilling his potential, so it has all worked out.

“He’s got such an amazing family around him. His agent did a fantastic job with him, giving him the guidance, and Reading did, too. It is hard with such an elite talent, to make sure the player knows he has to work every day in training.

“Michael really appreciates his journey. He’s such a mature and humble person, but that has been helped by his path.”

The ‘backdoor route’ has really benefited Olise’s development, Conlon believes. Starting his career in the EFL and building up his career has offered him a fresh perspective.

“In the under-15s, coming out of Chelsea and finding his way in adult football wasn’t easy,” Conlon says. “Reading are owed so much credit. Michael got the guidance he needed to bring his mercurial abilities into Championship football.

“He put in the hard yards. There were times he was on the bench but he didn’t sulk. He proved himself and he’s earned his place at Palace. (Manager Patrick) Vieira has brought him in gradually.

“The way Michael plays is a huge strain on the body, but he’s adapted and now he can be effective for 90 minutes. All of this has contributed to the player he is, but the journey has suited him.”

The future is bright for Olise and those behind him believe he has no limits. But if he faces Chelsea on Sunday, there will be no bad blood.

“He was so slight as a youngster, he needed game intelligence,” Conlon asserts. “Add that to the character from his journey – it makes him the full package.

“He can go to the very, very top. Everybody at Chelsea is so pleased with his success.”