MIDAS SHARE TIPS: Gore Street Energy Storage Fund is all charged up to benefit from renewable power boom which is gathering pace

The Government wants UK power generation to be greener and safer than it is today. According to the new energy strategy, published last week, Boris Johnson hopes that 95 per cent of our electricity will be low-carbon by 2030. Wind and solar farms are central to his plan.

But wind and sun are unpredictable. Sometimes, they do what they are supposed to do. Sometimes, they don’t. Last year, for instance, wind power generation fell by 14 per cent because wind speeds were lower than in 2020 for every month except February.

Overcoming this unpredictability is a huge challenge in the Government’s bid not just to reduce our carbon footprint but also to make us less reliant on imported energy – which rose more than a third last year to record levels. That is where battery storage comes into play. 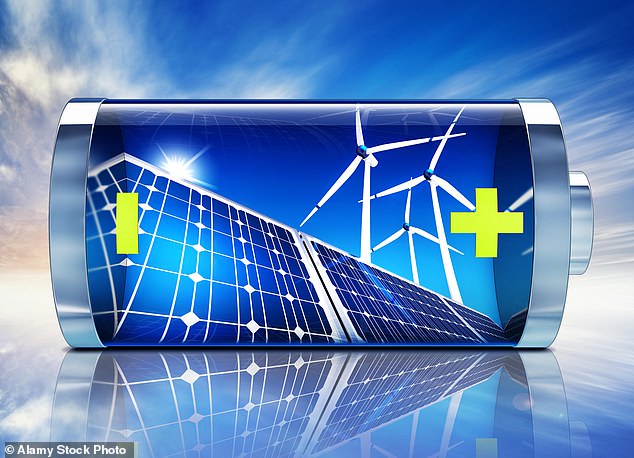 These huge units, each the size of a shipping container, can take energy from the grid when there is plenty of it and demand is low, such as at night. They can then store that energy and release it when needed.

The UK is a pioneer in the field and Gore Street Energy Storage Fund is one of the industry’s leading players.

The group’s shares are £1.13, but chief executive Alex O’Cinneide is hoping to raise £75million on the stock market, offering investors new shares at £1.10 apiece. The issue closes on Tuesday and looks attractive.

Gore Street was listed on the main market of the London Stock Exchange in 2018, when the company had one site in Boulby, North Yorkshire, storing 6MW of energy.

Today, there are 25 assets, with storage capacity of more than 700MW. Most of these are in the UK and Ireland, but Gore Street has recently moved into Germany and the US as well.

Battery storage is a key component of a secure and renewable energy mix but it is good business too. Contracts are long term and Gore Street’s customers – such as the National Grid here and EirGrid in Ireland – are robust and reliable.

That allows the firm to target a juicy 7 per cent annual dividend yield, paid quarterly. Gore Street’s financial year runs to March 31 and subscribers to the new fundraising will be entitled to the latest payout, which covers the three months to the end of March and is expected to be about 1p.

Gore Street has grown fast but there is plenty of opportunity for more. In the UK alone, National Grid has said we need 13,000MW of electricity storage by 2030, while international requirements are even greater.

That is music to O’Cinneide’s ears. He and his team have amassed a pipeline of assets with a combined capacity of 1,300MW here and overseas. Not all of them will come to fruition but O’Cinneide wants cash at the ready to make acquisitions quickly.

The company has raised money several times over the past four years and has always put it to work relatively fast.

Having been one of the first firms to tackle battery storage, Gore Street has access to more opportunities than most and the technical know-how to put new sites to work.

These tend to be far smaller and less conspicuous than wind or solar farms, but they need to be near grid connections and operators need access to reliable manufacturers to deliver the storage units.

Gore Street works with the likes of Tesla, Siemens and Korea-based LG Chem, one of the largest chemical groups in the world.

O’Cinneide also employs skilled technicians to manage Gore Street’s power to maximum effect – offering it to the grid at times of greatest need and helping to balance supply and demand hour by hour.

The UK was one of the first countries to allow battery storage operators to use their assets in multiple way but the approach is now being copied across the world, including in Germany and in Texas, where Gore Street has recently acquired new sites.

Midas verdict: Renewable power is growing fast and battery storage makes it that much more reliable. Gore Street Energy Storage Fund offers investors access to this fast-expanding field and generous dividends to boot. At £1.10 a share, the latest fundraising is a buy.

The feds just removed restrictions around prescribing a popular addiction medication. What does it mean for patients?

The feds just removed restrictions around prescribing a popular addiction medication. What does it mean for patients?