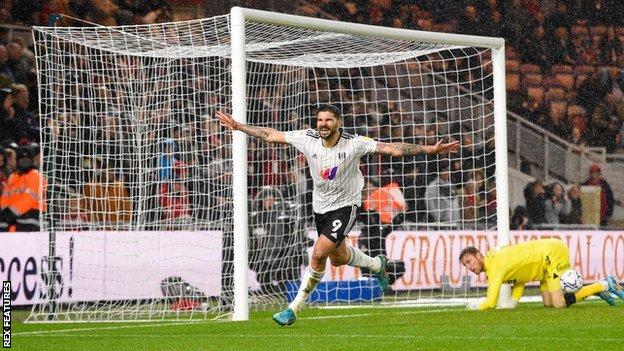 
Fulham inched ever closer to Premier League promotion with a hard-fought win over Middlesbrough in atrocious conditions at the Riverside Stadium.

Aleksandar Mitrovic’s 38th Championship goal of the campaign was enough to end Boro’s eight-match winning streak at home and put Fulham on the cusp of a return to the top flight.

Mitrovic headed in Harry Wilson’s pinpoint free-kick in the second half to give Fulham their 25th victory of the season.

Matt Crooks’ half-volley deflected over for Boro before Josh Coburn headed agonisingly off target and Duncan Watmore blazed over in the final seconds as the hosts failed to find a deserved equaliser.

Fulham will be promoted if Nottingham Forest lose to Birmingham on Saturday and they then beat Coventry at Craven Cottage on Sunday.

Chances in the first half were few and far between, with Mitrovic uncharacteristically wasting a gift of an opportunity when put through by some sloppy Boro defending as the Serb dragged his shot well wide.

Watmore and captain Jonny Howson had long-range efforts easily saved by Marek Rodak in the Fulham goal before the chance of the half fell to Crooks.

Marcus Tavernier’s whipped cross found the midfielder in the box but his effort was diverted over by defender Tim Ream.

Bobby Decordova-Reid then wasted a glorious chance for Fulham to take the lead early in the second half, somehow turning wide at the back post from Kenny Tete’s cross.

Fulham’s winner was straight off the training ground, with Wilson’s superb set-piece met by an unmarked Mitrovic in the box after he had sprinted in from well outside the area.

The hosts pushed for the equaliser as the rain intensified on Teesside and Coburn missed a golden opportunity to level things when his header drifted wide of the far post.

The ball fell kindly for Watmore deep into stoppage time but the 28-year-old fired over from close range as Fulham held on.

The league leaders now need just two wins from their remaining seven matches to seal an instant return to the top flight, while Boro drop out of the play-off spots to seventh.

“I think we had enough chances to win a couple of times.

“We got beat and I don’t like that. I don’t want to say we played well and we’ve done this and that, I want to win the game.

“It was a tough game. Probably if you ask me if it was one point for either team [a fair result] probably yes.

“We were much more dominant in ourselves [in the] first half then fantastic reaction from them in the second half as well.

“They are a strong side, they have great quality and they can play with a lot of intensity as well.

On Mitrovic: “Amazing goal. He deserves everything that he’s achieving so far this season.

“His reaction to the last season has been fantastic, the goals he scores speak for themselves and he deserves everything.

“He keeps working really hard for his team-mates and this club and that’s what I want to see from him.”

When Are the Big Games & How to Watch