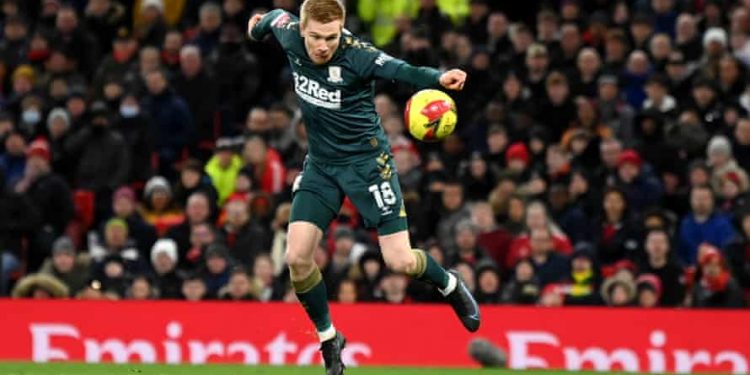 
On a night when Old Trafford’s concourse caterers went down, Manchester United made a complete hash of what had appeared a cruise of a victory over Middlesbrough. Ralf Rangnick’s side were knocked out 8-7 on penalties, the unfortunate Anthony Elanga missing the decisive kick but, really this was a defeat borne from them seriously losing the plot in the second half.

If Matt Crooks’s 64th-minute strike that levelled out Jadon Sancho’s opener was controversial as it came courtesy of a Duncan Watmore handball ruled accidental and thus legal, United’s serial missing of chances – including a Cristiano Ronaldo penalty – and inability to control the contest was to blame for the reverse.

For this fourth round tie in the one competition United might realistically claim, Rangnick could select Paul Pogba for the first time, the Frenchman back after 15 games out with a thigh problem. He lined up on the left of the midfield trident in a 4-3-3 Middlesbrough hoped to thwart, via Chris Wilder’s three centre-back shape, before 9,000-plus of their travelling fans.

They were nearly silenced one minute in, as Luke Shaw’s high ball was fumbled by Joe Lumley at his area’s edge. Ronaldo touched it on and Sancho’s cute chip on a diagonal came back off the bar. This was as bright an augury as the Diogo Dalot pass which encouraged Marcus Rashford to rush forward in pursuit, though Lumley this time collected cleanly.

United were in a mode not often seen so early on: a high gear that tore through Middlesbrough, who had no answer to their hosts quick and slick play. The home faithful’s next “oohs” were prompted by a Ronaldo bicycle kick he hit straight at the busy Lumley.

At kick-off Pogba’s season in numbers for club and country read 17 appearances, seven assists, no goals, and a red card. Rangnick has been encouraged by his showing in training and a thrust that drew a free-kick, a slide tackle on Folarin Balogun and the dragging of markers around to create space hinted at a keenness for the fray. All of this preceded Pogba claiming a penalty after he drifted into the area, took Shaw’s pass and was pulled down by Anfernee Dijksteel.

What occurred next, though, was Ronaldo missing the spot-kick to Lumley’s right, the Stretford End’s cheers of anticipation for their hero muted instantly.

Moments later the disappointment faded. Bruno Fernandes had spurned a close-range chance but now drilled a ball into the effervescent Sancho from halfway.

A mis-control took him wide but his effort – deflecting slightly off Isaiah Jones – went through Lumley’s arms and in.

This was a deserved goal for United, who were rampant and had cast Middlesbrough as bystanders unable to affect the contest. In Fernandes they had chief orchestrator, his next defence-splitting ball releasing Ronaldo along a left channel. The No 7 blazed at Lumley and he saved, but the Teessiders were desperate to survive without conceding again before half-time, when they could grab a breather and look to regroup somehow.

They made it, just about, three Shaw corners in succession from the right failing to create a second goal that would surely have demoralised the side seventh in the Championship – Rashford tingling Lumley’s fingers from the last of these.

A PA announcement informed the crowd that no food or drink could be served at the interval “due to a technical fault” which caused disgruntlement and a chant of “Glazers Out” directed at United’s unpopular owners from some fans.

They could be happier with the hunger their team continued showing in the second half – Scott McTominay, Fernandes and Sancho hunting the ball down in one vignette. The message being sent to Wilder’s men would have been more ruthless, though, if Rashford, then Ronaldo, had not spurned chances that were akin to the “gimme” category of tap-in putts for golfers.

This underlined how United’s inability to finish off those in green off could still bite them in the proverbial and cause them regret. Wilder’s team were enjoying their best phase illustrated by Pogba having to intervene in his area as Crooks lurked once more.

And, now, the latter did equalise. Watmore, a former United youngster just on as a replacement, handled Jones’s pass before playing in Crooks who scored.

United could blame only themselves. A next hapless moment came when Fernandes hit the post when it was, patently, simpler to score, while Pogba’s later header while falling back from a Shaw corner summed up how Rangnick’s side had faded.

For the closing minutes the German replaced Rashford and Sancho with Fred and Elanga. They did not affect the score, though, and so Taylor blew for normal time ahead of beginning the extra period.