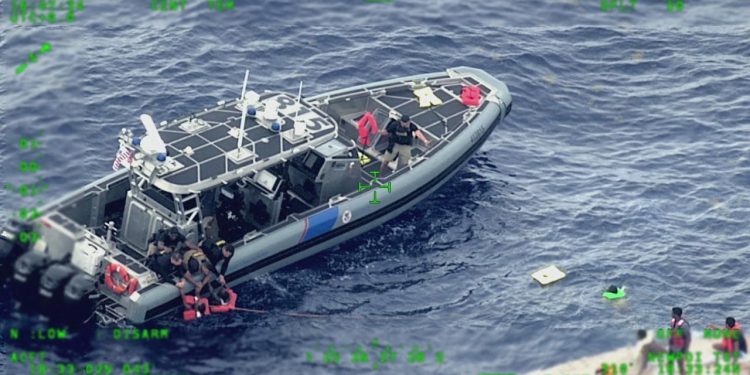 A makeshift boat overloaded with migrants capsized Thursday on its way to Puerto Rico, officials said, leaving at least 13 people dead as dozens more were rescued.

“We’re hoping to find additional survivors,” Ricardo Castrodad, a spokesman for the U.S. Coast Guard’s San Juan sector, said Thursday night as a rescue operation continued. “But it could go both ways.” He said it is not clear how many people were on the boat, which he described as “overloaded with people.” Crews did not see any life jackets, he added.

The Coast Guard said it heard shortly before noon that the aircrew of a Customs and Border Protection aircraft had spotted the boat and people in the water. Authorities said the boat was found about 10 nautical miles north of Desecheo Island — a patch of land in the Mona Passage, the strait between Puerto Rico and the Caribbean island that includes the Dominican Republic and Haiti.

The vessel is “suspected of taking part in an illegal voyage,” the Coast Guard said in a news release. An increasing number of migrants have made similar treacherous journeys by sea, fleeing countries where the coronavirus pandemic has exacerbated long-standing problems of poverty and violence.

Thirty-one survivors — 11 women and 20 men — were taken to Crash Boat Beach in Aguadilla, said Jeffrey Quiñones, a regional spokesperson for Customs and Border Protection. He said the boat departed from the Dominican Republic but added that only two survivors are from that country.

Those rescued include eight Haitians who were transported to a hospital in Aguadilla, a town in northwestern Puerto Rico, Quiñones said.

Betsy Rivera, spokesperson for Puerto Rico’s Institute of Forensic Sciences, said the agency received 13 bodies as a result of the sea accident. It did not yet have identities or nationalities for the deceased. Autopsies will take place Friday and the agency hopes to extract DNA to identify the dead.

The institute has been in touch with the Dominican Human Rights Committee, an organization it typically contacts with these types of incidents, to help identify family members on the neighboring island.

Puerto Rico has a large Dominican population, and illegal crossings by sea are common. Videos circulated on social media capture migrants arriving on popular beaches, where locals sometimes welcome and cheer them on as they run from authorities.

But the crossings can be perilous. Last week, a woman died after a boat capsized during an illegal voyage through the Mona Passage. The U.S. Coast Guard and the Dominican Republic Navy rescued an additional 68 people after spotting them “consistently bailing water out from the makeshift vessel,” officials said.

Castrodad said the kind of vessel that capsized Thursday is known as a “yola” — a boat with “poor construction, always taking on water, unseaworthy and designed to try to just get these people across in one attempt.”

The boats can be hard to detect, he said, so it was fortunate that Customs and Border Protection crews spotted the emergency.

Officials said they are working to interview the survivors and learn more about the situation.

Increasing numbers of Dominicans and Haitians have been intercepted in Puerto Rico and the Mona Passage on “illegal voyages” in recent years, according to U.S. Coast Guard data. In fiscal 2021 — which ran from Oct. 1, 2020 to Sept. 30, 2021 — 463 Dominican and 15 Haitians were intercepted by the Coast Guard.

Fifty-three such voyages were intercepted by the Coast Guard and its partner agencies from Oct. 1 of last year to March 31. Some 1,308 migrants — including 940 Dominicans and 298 Haitians — were apprehended, the Coast Guard said.

According to U.S. Coast Guard data, 1,527 Haitians, 742 Dominicans and 838 Cubans making “illegal voyages” were intercepted in Florida and the Caribbean in the year ended Sept. 30, 2021.

Minority Rights Group International, a human rights nonprofit, said that about 30,000 of 100,000 Dominicans living in Puerto Rico are believed to be undocumented immigrants. Most of those immigrants remain on the island rather than going on to other parts of the United States, the nonprofit said.