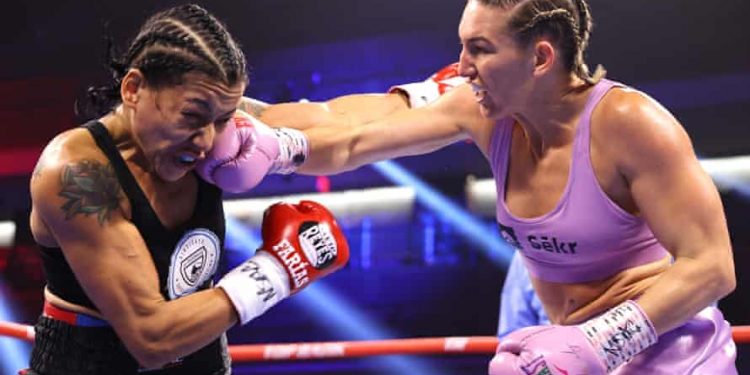 
Mikaela Mayer is used to surprising people. She joined an all-girl metal band at the age of 12, made her debut on bass guitar at the iconic Whisky A Go Go in Los Angeles, the venue where groups from The Doors to Guns N’ Roses had played, and went on numerous tours across America until she was 15.

Mayer is now one of the leading female fighters in the world and she has an unbreakable bond with Al Mitchell, her 77-year-old trainer. She is also the IBF and WBO super-featherweight champion who tore up every last tired misconception about women’s boxing last November in Las Vegas.

Mayer and Maiva Hamadouche waged a brutal battle which belonged in the top three most riveting fights in either men’s or women’s boxing last year. I was lucky enough to be there but, with memories of her courage and skill and tenacity still fresh in my mind, the 31-year-old from California still surprises me when we meet.

The world champion explains that, before she faced the fire and fury of Hamadouche, she went for a manicure and pedicure. “I always do that before my fights,” Mayer says with a smile. “I did my nails the same colour as my fight outfit. So they were brown for the Hamdouche fight. I did the same with my toes.”

Her gleaming nail varnish was hidden by black boots and brown gloves which maintained a blurring ferocity as she chose to stand and trade. Hamadouche refused to take a backward step and kept firing punches despite being tattooed by the jolting combinations of Mayer.

I got kicked out of high school. Then I found boxing and had this epiphany

“I’ve never been so calm in a fight,” Mayer says. “I was able to slow things down and that’s hard to do when Hamadouche has such a high punch count. People usually get flustered under that pressure but Coach Al had me fighting in the pocket, with strong guys firing body shots. He’s been doing that since I turned pro [in 2017], because he knew that one day we’d face a girl like Hamadouche.”

Mayer won a clear and unanimous decision and says: “She didn’t punch as hard as I expected. Lots of her stoppages came from not one-punch knockout power but just overwhelming her opponents. I was like: ‘I’d rather bang it out with you than look like I’m retreating.’”

Did the fight change perceptions of women’s boxing once and for all? “Of course,” Mayer says. “Every fight I do that – but that fight felt especially important because it had a bigger platform. I was headlining in Vegas and there was such a build-up. Little by little, we’re changing people’s idea of women fighters.”

This will be a seismic month for women’s boxing. On Saturday night, Mayer, whose record is 16-0, defends her world titles against another American, Jennifer Han, who lost to Katie Taylor last September. Then, on 30 April, Taylor and Amanda Serrano will headline Madison Square Garden in New York in the richest and biggest fight in the history of women’s boxing. Mayer, who will be ringside, hopes to meet the winner.

“It’s a win-win situation for me because a fight with Katie Taylor would be phenomenal and a fight with Amanda Serrano would be huge for America. So fighting the winner is my dream.”

Mayer would have to move up a division against either Taylor or Serrano but the change should suit her. “I’m going to be at my best at lightweight because I’ll be naturally stronger at 135lbs as I’m walking around at 150 and I’m 5ft 9in. I’m so ready for Taylor or Serrano.”

She first needs to beat Han in California. Taylor told me she had not enjoyed fighting Han because it’s difficult to look good against such a defensive opponent. “Here’s the thing,” Mayer says. “Katie fights everybody the same way and does it really well. But you need to strategise against different opponents and I’ve done that. We know Han gets on her bike and she’ll circle to the right, and left, get inside and grab and hold. It can make you look ugly and it’s frustrating but I’m excited to show my boxing IQ.”

Mayer’s intelligence and charisma outside the ring is just as compelling. She might have been precocious but she was also troubled as her mother had difficulties with alcohol and drugs. Mayer forged her own fierce path. “Me and my best friend started playing music when I was 10. I was on bass and she was on guitar so I’d go to her house every day after school to play music. But we had a falling out so I put an ad on Craig’s List.”

Claiming to be 13, rather than 12, Mayer was contacted by “three girls who were in a band and they said: ‘We need a bass player, can you meet us at the mall? I was beyond my years and I looked the part in my black top with light brown hair and black tips and all my piercings. Even though they were older than me, they were like: ‘Okay, this girl likes our kind of music …’

Mayer loved being in the band, called Lia-Fail, for the next few years but on their second US tour she decided to quit because “one of my horrible first boyfriends was giving me problems about being away, such a stupid teenage thing. I broke up with him shortly after that, thank God. Then I had my party phase. From about 15½ to 17 I put my dad through hell, wouldn’t come home for weeks at a time.

“The partying came because my dad suddenly had custody of me and my two sisters and he was gone before we woke up and he didn’t come home until night-time. So no-one was getting me up for school. My sisters would go but I was rebellious, like: ‘I’m going to my boyfriend’s house to hang out, smoke pot, do whatever I want.’ I got kicked out of my original high school and ended up in a school where all the bad kids go. That’s when I found boxing and had this epiphany: ‘I don’t want to continue on this pointless path. I want to be successful, I want to be good at something.’

“I was a troubled teen so when I came home and said: ‘Dad, someone’s set up a boxing gym’ and he was like; ‘OK, great.’ I originally started with a Muay Thai coach and I had some losses so my dad knew it was time to find me a real boxing coach. He was on the USA Boxing website and he found out about the programme in Michigan where I could go to college and train with the two-time Olympic coach, Al Mitchell. Before I knew it, they wanted me in two weeks.”

Mitchell had lost his leading professional boxer, Vernon Forrest, who had been murdered that year, 2009, and he was grieving. “He also took me because the programme was losing its funding,” Mayer concedes. “Al was like: ‘Women’s boxing is in the Olympics now so bring her in. I need to fill these spots.’”

Mayer stresses that she owes all her success to Mitchell – but she also gave him a new lease of life once he realised she had a voracious appetite for hard work and a deep desire to succeed. She shows me the tattoo of his initials on her hand. “I stayed there for another four years, trained for the 2016 Olympics and when I won the Olympic trials and made the team you get pulled away from your original coaches. They want you to train with the team at the Olympic Training Centre in Colorado Springs. As I was getting ready to leave Al I thought: ‘I want to get those initials on my hands because he’s the one who got me here, he crafted these hands.’ It’s my tribute to him.

“I went to the gym that day and said: ‘I can’t do speed bags today’. My hand was wrapped up and I told him I’d just had it tattooed. He was sighing: ‘My God, these young people!’ Later his girlfriend said: ‘Mikaela, show me your tattoo.’ So I showed them and when Al saw his initials he was like: ‘Ah, shucks, you didn’t have to do that!’”

After the Hamadouche fight, Mayer paid him well. “I thought: ‘We’re 13 years in and he hasn’t made a ton of money off me. He’s put in way more time than he’s received.’ Al calls and says: ‘I just want to say thank you for the money. If you want to pay me less, I don’t mind. I need you to save.’ I’m like: ‘Coach, are you crazy?’ I’m finally able to give you a big chunk of change. Take it!’”

From the start of her boxing career, Mayer says: “I was so focused on it. I’m an extremist so I needed boxing. Coach Al has been the right person to help me in my ambition.” She looks up and smiles when I ask her to distil that ambition into a sentence: “I want to be the best female fighter in the world.”