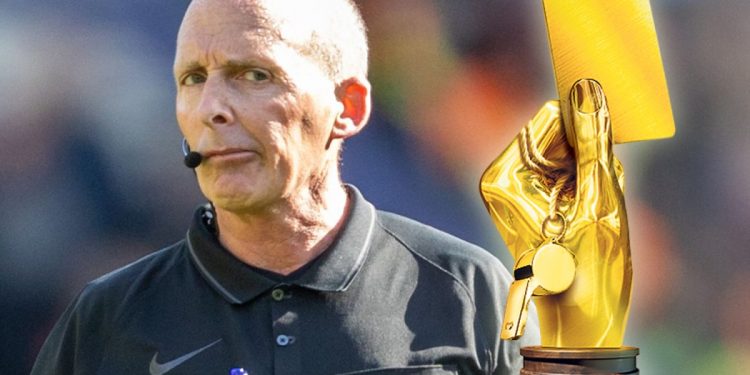 
PREM chiefs will mark referee Mike Dean’s retirement by giving him a GOLDEN CARD on the final day of the season.

Wirral whistler Dean, 53, is set for a senior VAR role at Stockley Park next term.

If the title race is settled, his final outing on May 22 could be Liverpool v Wolves or Manchester City v  Aston Villa — so he can enjoy the carnival atmosphere.

All other Prem matches  that day are to be paused in the 22nd minute for a round of applause to mark Dean’s 22 years as a Select Group referee.

A PGMOL spokesman said: “Mike has been an iconic figure in officialdom for the past two decades and it is important to celebrate his  retirement appropriately.

“He will hate the fuss but we’re hoping this will ­provide a blueprint for marking the end of the careers of top referees and assistants in the future.

“All we want is consistency.”

Dean is the PGMOL’S most experienced ref by some distance.

And as the game’s rulers don’t want the spectre of him disappearing from the middle in humble fashion, they are ensuring he bows out on a GoldenHigh.

Only the likes of Martin Atkinson, 50, and Andre Marriner, 51, who both made their Prem debuts in 2004, come close.

Why did Rishi Sunak cut tax and raise tax at the same time? TiM podcast

Why did Rishi Sunak cut tax and raise tax at the same time? TiM podcast