Mike Krzyzewski Was My Coach, Even Though I Never Went to Duke 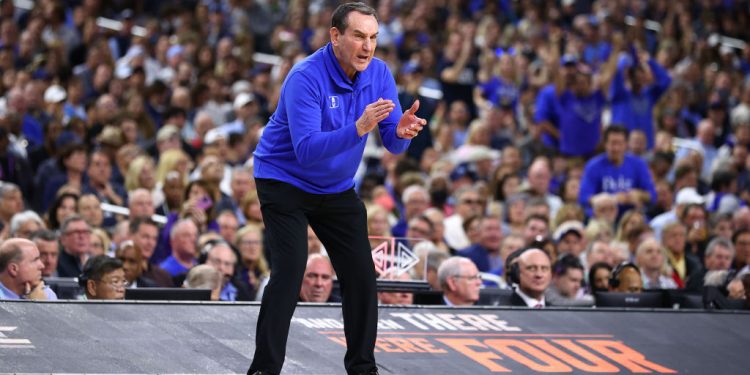 
As you know by now, Coach K’s career has come to an end. His Duke Blue Devils fell in Hollywood fashion, losing to the UNC Tar Heels in the Final Four. Depending on your personal persuasion, you’re either mourning the loss or thrilled that you’ll never have to see Krzyzewski again.

I’m not here to debate those feelings. We all know the stats, the silverware, and the moments, both good and bad, that make up the head coach’s legacy. That’s not going to change at this point.

Instead, I’d like to explain things from my admittedly biased perspective. This is what Coach K meant to me. Barring one press conference in the bowels on Madison Square Garden, I never interacted with him, but I still learned a great deal from the living legend.

While I’m not sure when I first learned about Coach K — a look at the name within my byline will largely explain the root cause of my affinity — I do know that things got more in-depth in the third grade. When I needed independent reading books, my eyes turned to my dad’s shelf of hallowed sports tomes. I struggled through Season on the Brinkrecognizing the name from the ESPN movie that came out around the same time, before seeing what else I could find. I ended up landing on Coach K’s Little Blue Book and Leading With the Heartalso written by Duke’s bench boss.

While I obviously appreciated the stories, the books contained something more. Leading With the Heartlike most of Krzyzewski’s books, used moments from his life and career to illustrate lessons about leadership. A discussion of ownership and pride, for example, could be accompanied by a recollection of his mother refusing to give up her purse to would-be muggers. As any Duke player can tell you, she simply refused to let go, saying that the purse was hers and didn’t belong anyone else.

In fairness, those concepts aren’t original; it’s not like Coach K was the first person to decide that taking pride in one’s work was important. If you spoke to any basketball coach around the country, they’d probably have an anecdote that speaks to the same underlying ideas. Krzyzewski, however, was the one who explained it to me. And it made sense.

It was like I was one of his players, learning from the same classic stories he trotted out every season or, in my case, in every book.

Like most others who transition from playing to writing, I was never the biggest star on the hardwood. I could, however, do the stereotypically Duke things like diving on the floor for loose balls, boxing out, and setting screens. As the cliche says, practice makes perfect. Over time, those values became mine and shaped how I did things. I took pride in those overlooked details, and came to love playing a small role in a larger success.

To be clear, I completely acknowledge that pinpointing any one position as the “right” way to do things is a loaded notion. My right is another person’s unimaginable. But, even from afar, Coach K had managed to teach me some major lessons.

If I may jump forward in the chronology and introduce another sport, my other coaching touchstone is Arsene Wenger. While I found him later than Coach K, I came to realize that he and the Duke legend held something important in common.

Wenger, perhaps to his detriment, focused on things besides winning. While he earned plenty of silverware and famously went 49 consecutive games without a defeat, he also spoke about creating art on the pitch and helping his players grow. Krzyzewski, for all of his success, literally wrote that winning doesn’t define him in Beyond Basketball: Coach K’s Keywords for Success.

Again, I think that resonated with me. Whether in sports or in life, you simply can’t come in first place every time. While claiming the ultimate prize may be the end-all, be-all for someone like Jose Mourinho, hearing my preferred coaches understand that reality provided a form of permission. You always push for success, but there’s more out there than simply winning. Those things, more often that not, are the true prizes.

On the subject of learning lessons, two things from Krzyzewski’s final run stood out as they happened.

First, there was his on-court interview after Duke defeated Texas Tech. When discussing his players’ collective will to win, the legendary coach seemed almost speechless with pride. He also admitted that, after working with the likes of Grant Hill, Jayson Tatum, and Zion Williamson, he could still look at Paolo Banchero and say, “I coach that guy. Holy mackerel.”

To me, that interview showed the importance of passion and appreciation. It’s easy for any of us to become cynical and simply go through the motions, but, in arguably the biggest stretch of his career, Coach K sounded almost like a child. While “childish” can obviously have negative connotations, we can probably all stand to hold onto a bit of that sense of wonder. Sports are fun. Seeing those around us thrive is awesome. Even within the grind, there’s plenty that we should enjoy but simply don’t.

Secondly, Krzyzewski’s wife, Mickie, was always visibly present during every step of the season. Coach K preaches the importance of family in all of his books, and, as far as we can publicly see, he walks the walk. Again, it’s not groundbreaking to speak about the importance of your partner and children, but I found the Duke boss to be a good reminder not to take those around me for granted.

As a long-time Duke fan, I can anticipate the objections that this post will raise. You could contend that lessons about family, appreciation, and ownership are fluffy cliches that every coach preaches. That’s true, but it doesn’t change the fact that I learned them, albeit indirectly, from Coach K. You might argue that there are plenty of instances of Krzyzewski snapping at reporters, berating referees, and cutting handshakes short after losses. I wouldn’t deny those, but I would also suggest that they don’t invalidate his positives. If those are the worst offenses from 40-plus years in the public eye, I’d say that’s a pretty clean rap sheet.

Lastly, you could state that Coach K is smug, generally annoys you, or has a punchable, rat-like face. While I’d disagree, I certainly think you’re entitled to feel that way. I don’t really want to appreciate Tyler Hansbrough, Emeka Okafor, or any of the other thorns in Duke’s side over the years, even if they deserve it. So I understand the sentiment.

At the risk of parroting Kyrie Irving, I’d assert that Coach K’s legacy is more than wins, championships, and NBA draft picks. It comes down to the impact he’s made on countless lives over the years. He’s certainly touched mine, even from afar.

That’s what it’s all about. As one of his own books says, it’s “beyond basketball.”

RELATED: Coach K’s Duke Career Could Look Quite Different Without an Accidental Assist from Tubby Smith