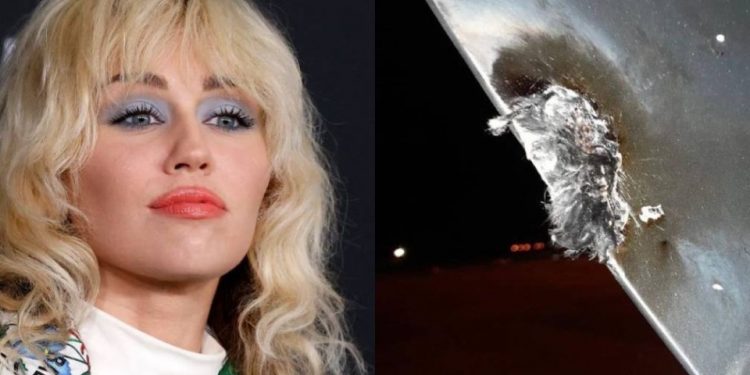 Miley Cyrus’ private plane has been forced to make an emergency landing after it was struck by lightning.

The former Disney star was travelling with her crew, band, friends and family to Paraguay, where she was scheduled to headline the second day of the Asunciónico music festival in the nation’s capital.

Cyrus shared footage of the lightning strike to Instagram after news broke of the terrifying incident.

A bright flash of light can be seen beaming through the plane’s window as passengers are heard gasping.

“Our plane was caught in a major unexpected storm and struck by lightning,” Cyrus wrote alongside the clip.

“My crew, band, friends and family who were all travelling with me are safe after an emergency landing.

“We were unfortunately unable to fly into Paraguay. I LOVE YOU.”

The Party in the U.S.A. singer also shared an image of the damage to the plane, with the metal clearly battered at the point of impact.

The Asunciónico music festival, in which The Foo Fighters, Doja Cat and Machine Gun Kelly were also schedule to perform, has been cancelled by organisers due to the wild weather.

According to Aerotime, lightning strikes hit planes about once every 1000 hours of flight time, roughly once a year.

Lightning hasn’t caused a commercial plane catastrophe since 1963, when a Pan American Boeing 707 was struck in Maryland, killing all 81 passengers on board.

Cyrus is on her Attention Tour in South America. She is next set to headline Lollapolooza in Brazil on March 26.