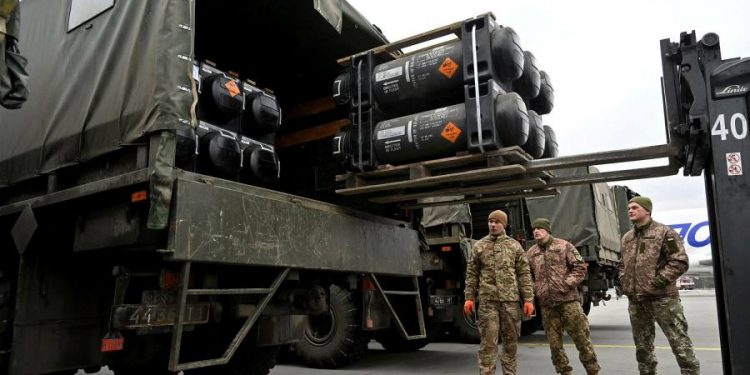 
A difference of 3mm encapsulates the challenges the west faces as it works out how to supply the weapons that Ukraine needs to hold off, or even repel, Russian forces during the next phase of the war: the looming battle for the Donbas.

The list of weapons that Ukraine wants includes more long-range artillery to target the Russian positions that have been shelling its cities during six weeks of heavy fighting. However, most Nato countries’ heavy artillery has a 155mm calibre while Ukraine, as part of its Soviet legacy, uses 152mm.

“The Ukrainians are running out of 152mm ammunition. Where are they going to get it?” asked Chris Donnelly, an adviser to four former Nato secretaries-general on the Soviet and Russian military. “No one in the west uses it or makes it apart from the Serbs — and they’re on Russia’s side.”

Such dilemmas go to the heart of the types of military support that Kyiv has requested for a war that has gone on longer than many initially expected.

Vladimir Putin’s forces, having failed to capture Kyiv, are regrouping for a new eastern offensive centred on the Donbas region, a phase that western officials say is expected to take at least a week.

That timeframe will provide an “extremely important” window to provide military support to Ukraine so it can “continue to inflict heavy casualties on the invading Russian forces”, said Jens Stoltenberg, Nato’s secretary-general, this week. But what kind of weapons, how fast can they be delivered, and from which countries?

Dmytro Kuleba, Ukraine’s foreign minister, summed it up on Thursday when he was asked if Nato allies had met his demand for “weapons, weapons and weapons”. “Let me put it this way: I’ve no doubt Ukraine will have the weapons necessary to fight,” he said. “The discussion is not about the list of weapons, but the timeline.”

Ukraine’s military successes so far have been thanks to guerrilla-style tactics and the smart use of portable equipment including drones and anti-tank missiles supplied by the west in prodigious amounts.

The US has provided $1.7bn of military aid since Russia invaded Ukraine on February 24, including most recently 100 ‘kamikaze’ Switchblade drones. The EU has approved €900mn of lethal aid and another €100mn of non-lethal supplies, while the UK has sent 10,000 Nlaws and Javelin anti-tank missiles, as well as Starstreak air-defence systems.

But in anticipation of the battle in the Donbas, fortified by Russia after an eight-year occupation, Ukraine has stepped up its demands for tanks, fighter jets and long-range anti-aircraft missile systems.

“We recognise . . . more advanced weapons will be required,” an official from a Nato country said. “We’re prepared to go further.”

Even so, western allies must find a balance between supplying aged kit from former Warsaw pact countries that can be put to use quickly but is in short supply, such as 152mm artillery shells, or providing more modern, western-sourced weapons which may require extensive training when time is short.

“There are some things that you might want to provide over the next 30-60 days because they can be instantly used,” said Admiral Tony Radakin, the UK’s most senior military officer; or more sophisticated equipment “which needs to have quite long training programmes . . . and then needs quite complicated support arrangements”.

Another issue is how to provide military support without escalating the conflict. It is one thing to truck crates of Javelin missiles through Ukraine and another to dispatch highly visible convoys of armoured vehicles.

“Donbas is going to be a big reveal of western intentions,” said Mathieu Boulègue, senior research fellow at Chatham House in London. “As the west expands the types of weapons it supplies, it will stress-test Russian thresholds of tolerance.”

So far, the Czech Republic is the only country known to have supplied Soviet-designed T-72 tanks. It has also offered to repair damaged weaponry the Ukrainians have used or captured from Russian forces.

Julianne Smith, US representative to Nato, said this week that the Czech move was “a sovereign decision by a sovereign state”. But in a sign that others may follow, UK foreign secretary Liz Truss said on Thursday that “there was support for countries to supply new and heavier equipment to Ukraine”.

Ukraine also has a need to bolster its air defences. Its most potent armament is the Soviet-designed S-300 long-range, surface-to-air system that can target aircraft and cruise missiles.

Slovakia said on Friday it had given such a system to Ukraine, out of its stock of S-300 launchers. Even so, Slovakia has only a limited number of missiles that these can fire, said Roger McDermott, a defence specialist at the Jamestown Foundation think-tank.

Eventually, Ukrainian forces will exhaust Nato members’ supplies of Soviet-era weapons and need to shift to western-sourced systems. Truss said on Thursday that Nato countries had agreed to do this “on a bilateral basis”.

That will bring supply challenges of its own. Most EU armies have not planned for high-intensity conflicts, but rather prolonged, low-intensity counter-insurgencies, such as in Afghanistan.

“As a result, they have low magazine depth,” said Henry Boyd, a military analyst at the International Institute for Strategic Studies in London. “At some point they [Nato countries] will need to supply off production lines rather than from military stockpiles.”

For now, speed is of the essence so Ukrainians can prevent the Russian military from rebuilding momentum and morale. “When do we get them?” Kuleba asked of the military supplies. “This is crucial.”

Video: Ukraine’s battle of the airwaves

Are you personally affected by the War in Ukraine? We want to hear from you

Are you from Ukraine? Do you have friends and family in or from Ukraine whose lives have been upended? Or perhaps you’re doing something to help those individuals, such as fundraising or housing people in your own homes. We want to hear from you. Tell us via a short survey.

Watch to Watch on Netflix, HBO Max, Disney Plus, and More: April 2022