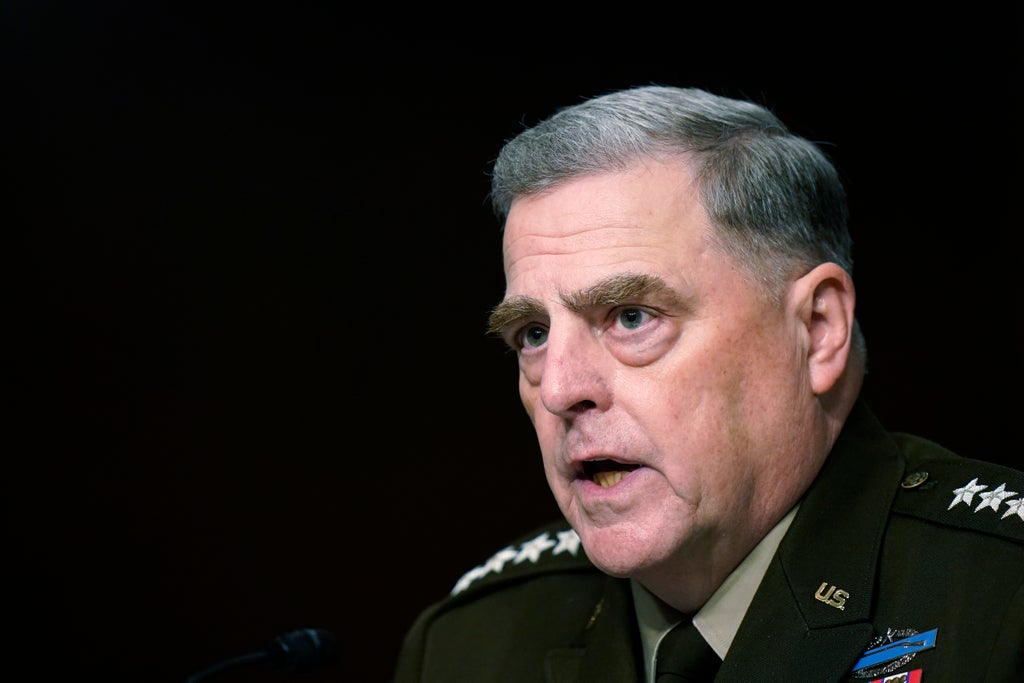 Chair of the US Joint Chiefs of Staff Gen Mark Milley has forcefully defended his own patriotism and actions regarding calls with a top Chinese general that have become the centre of controversy among Republicans and supporters of former President Donald Trump.

Speaking before the Senate Armed Services Committee on Tuesday, the general used his opening statement to address reports of his communications with his counterpart in China regarding the Chinese military’s concerns that an increasingly erratic Mr Trump would order a military strike in the waning days of his presidency.

“I know, I am certain, President Trump did not intend on attacking the Chinese and it is my directed responsibility – to convey presidential orders and intent. My job at that time was to de-escalate. My message again was consistent: calm, steady, deescalate. We are not going to attack you,” he said, adding that Defense Secretary Mark Esper and other civilian personnel were involved with the call before, during and after it occurred.

Gen Milley faced criticism from Republicans following reports that he twice contacted Gen Li Zuocheng, of the People’s Liberation Army, to reassure him that then President Trump was not planning to direct a military strike against China and later to assure him that the country was stable following the insurrection.

“We are 100 per cent steady. Everything’s fine. But democracy can be sloppy sometimes,” Gen Milley reportedly said on the call, made after the Capitol riot.

As he began to address the now infamous call with his Chinese counterpart, which was detailed in the book Peril by Bob Woodward and Robert Costa, Gen Milley said: “I have served this nation for 42 years.

“I’ve spent years in combat and buried a lot of my troops who died while defending this country. My loyalty to this nation, its people, and the constitution hasn’t changed and will never change as long as I have a breath to give. My loyalty is absolute.”

He had previously commented that the calls, made on 30 October 2020 and 8 January 2021, had taken place with the knowledge of the Department of Defense.

TikToker praises stranger in job recommendation after his number is given

TikToker praises stranger in job recommendation after his number is given