Mississippi had the lowest levels of life expectancy – where 20% live in poverty – at 74.4 years 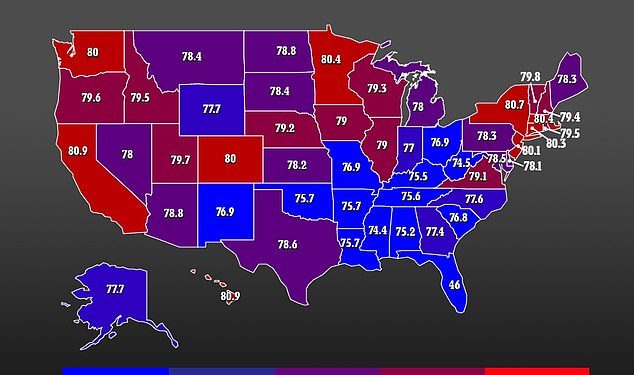 
A massive disparity has opened up in life-expectancy within the U.S., with southern states like Mississippi and Alabama falling far behind their peers in the northeast and out west.

The Centers for Disease Control and Prevention (CDC) published a report Thursday on life-expectancy in the U.S. and each individual state from 2019 – the most recent full data set available. This would be the final year before the COVID-19 pandemic, which drastically shifted American life-expectancies starting in 2020.

Overall, Americans are expected to live 78.8 years, with women living five years longer than men on average, averaging 81.4 years of life compared to their male peers that live an average of 76.3 years.

Mississippi has the lowest life-expectancy of any U.S. state, with the average person born in the state expected to live 74.4 years. The burden is especially low for men born in the Magnolia state, who only live 71.2 years on average.

The report highlights how poverty, especially in the south, can have harmful effects upon a person’s quality of life. Mississippi has the highest poverty rate per any U.S. state, with one out of five residents being impoverished, with states like Alabama and West Virginia also finding themselves among those with the lowest life-expectancies and highest poverty rates. 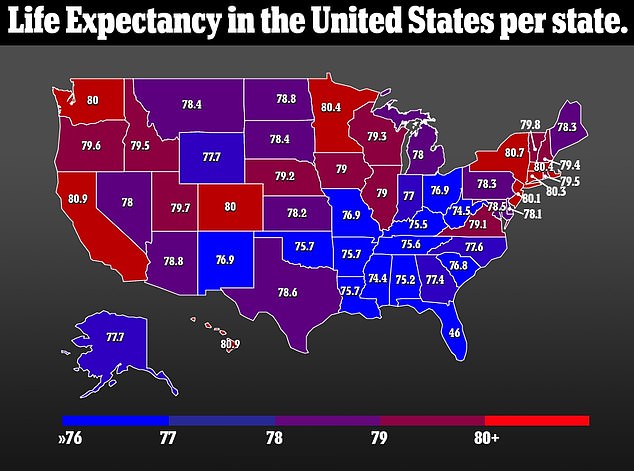 A CDC report published this week finds that southern states with high poverty rates like Mississippi, West Virginia, Alabama, and Kentucky have the worst life-expectancies. Western and northeastern states like Hawaii, California and New York have the longers 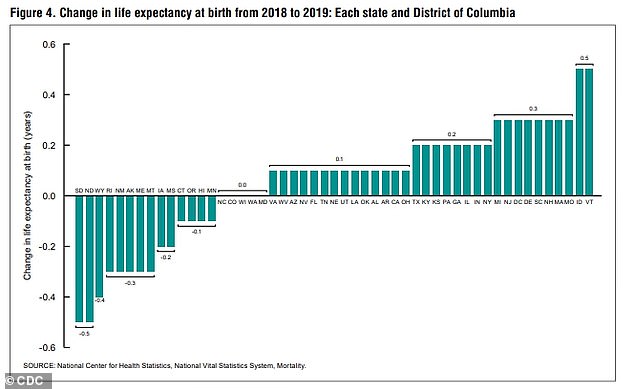 Hawaii and California have the longest life expectancies in the U.S., with those born in either state expected to live 80.9 years. Hawaiian women live the longest lives in America, averaging 83.9 years of life.

Each of the nine states with the worst overall life-expectancy are southern states in the U.S. south that were also among the 12 states with the highest poverty rates in 2019, per Census data.

Meanwhile, states with the longest expected life for people born their are largely concentrated in the northeast and western portions of America.

None of these states have a poverty rate of over 13 percent. Around 11 percent of Americans overall are living in poverty.

There is a clear correlation between income and life-expectancy in the U.S., and around the world.

A study published by the National Institutes of Health in 2017 found that the top one percent wealthiest Americans on average lived 14 years longer than the poorest one percent.

Americans who live in rural areas – and generally have less wealth than their urban counterparts – live shorter lives as well and more likely to suffer from a ‘disease of despair’, a separate study from last year finds.

In three states, women are expected to live six or more year than men who are born in the same state. 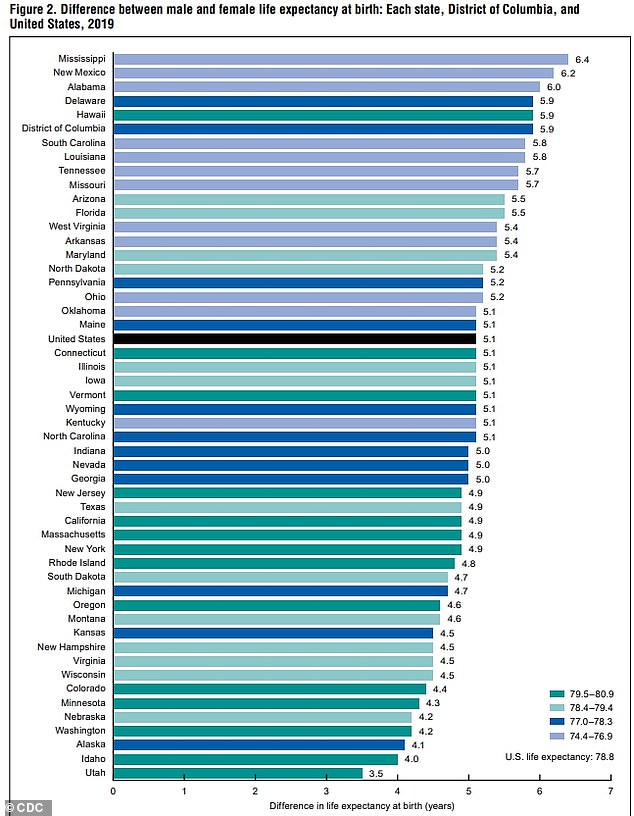 Women generally live longer than men in the U.S., with the biggest disparity being the 6.4 years more of average life for Mississippi women when compared to men from the state

Mississippi, women live 6.4 years longer on average. The difference is 6.2 years in New Mexico and six years in Alabama.

Utah is the only state where the gap is under four years, and by a large margin, with men only having an expected life that is 3.5 years shorter than women.

Overall, life expectancy increased by 0.1 years in 2019 when compared to 2018. The figure fell in 14 states years over year, stayed even in five states, and increased in the remaining 31.

The CDC report does not discuss the causes of death, but the agency does report elsewhere that heart disease was the leading cause of death in the U.S. that year, killing 700,000 Americans.