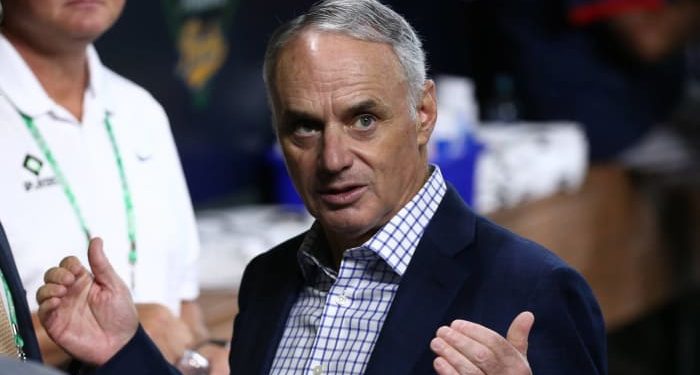 
Good morning, it’s Josh Rosenblat, checking in from frigid and snowy Chicago where DeMar DeRozan is the only thing that’s warm.

Is it time to panic about MLB’s lockout? I checked in with Matt Martell, SI’s MLB editor, via Slack, to get a rundown on when we can expect baseball to return. What follows is an edited version of our direct messages.

Josh Rosenblat: Matt, welcome to SI:AM! A simple question to start things off: When will Dan get to watch his beloved Yankees crash out of the playoffs again?

JR: Fine … how about this? Why aren’t we a week away from Dan’s being able to watch Yankees-vs.-Pirates Grapefruit League action?

MM: That’s a much more specific question, but the answer is still somewhat complex. The surface-level answer is that MLB locked out the players on Dec. 2, following the expiration of the league’s most recent collective bargaining agreement, and now nearly three months later, the two sides have not agreed to a new CBA.

The reasons for why they have not come to a new deal are more complicated.

JR: You’ve been following this news and anticipating a lockout for a while. What are the biggest issues keeping the league and players from a deal?

MM: The biggest issues stem from the same central conflict: MLB’s revenues are at an all-time high while the average player salary is actually declining. Players want their salaries to reflect the game’s revenue. They feel that they are the ones who fans are paying to see, either on TV or in person, and therefore, that they deserve to be compensated fairly for their role in the game’s growth.

Both sides have agreed to the broad concepts of the first three issues—raising minimum salaries, implementing the bonus pool and creating a draft lottery.

MM: But they remain apart on the specifics for each. You can read about some of the specific financial differences here.

JR: What about the revenue-sharing and service-time issues?

MM: The owners consider the fourth and fifth issues nonstarters. The union views them as essential to increasing player pay and competitive integrity.

JR: So where does the competitive balance tax come into this?

MM: The CBT is the most contentious of the bunch. It is a luxury tax that penalizes teams if their payrolls exceed a specific amount determined by the CBA. It was first implemented to curb excessive spending—think Dan’s Yankees of the late 1990s and early 2000s—with the idea being that it would create more parity in the game between small- and large-market teams. In practice, it’s worked as an unofficial salary cap because club owners don’t want to pay the tax penalties. That would be fine, to an extent, except that CBT has not kept pace with MLB’s revenue. Travis Sawchik of The Score had a great piece explaining the relationship between the CBT and MLB revenue.

Right now, they are $31 million apart on the threshold. The league wants to increase the tax rates for teams that exceed the threshold; the players want to keep those rates the same.

JR: Got it. Thanks. The two sides have been talking way more this week than they have previously, right? Why’s that?

MM: That’s correct. MLB set a deadline: to play a full 162-game season, the two sides would need to come to an agreement by the end of February. Opening Day is currently scheduled for March 31, so that would give players enough time to report to spring training camps, get some work in with their teams and play spring training games—and also give teams enough time to sign the remaining free agents and make trades—before the season begins. Feeling the pressure of that deadline, the two sides have met every day this week.

JR: Has the talking produced any progress?

MM: Incremental progress, at most. A little increase in minimum salaries, a slight decrease in the percentage of arbitration-eligible players with more than two years of service, small movements in the bonus pool amount, but nowhere near enough to indicate that a deal is close. Perhaps the most progress produced from these talks is that they are actually talking and are continuing to do so.

JR: Love it. A little positivity. Obviously these discussions can move quickly. What’s the best way to keep up with SI’s reporting?

MM: Yes, some self-promotion! Tom Verducci and Emma Baccellieri have been doing an excellent job providing updates and putting all the developments into context. You can find their work at SI.com/MLB. And every Friday, I’m covering the lockout in our free baseball newsletter, the Five-Tool Newsletter. You should definitely sign up for that at SI.com/newsletters! The next one will be out sometime this evening after today’s bargaining session.

Miles Bridges is having a breakout year for the Hornets, the latest example of an NBA player betting on himself. He reportedly turned down a $60 million contract extension and is now averaging career highs in points, rebounds and assists per game.

“Sometimes I’ll sit down and just think, Wow, this really is my dream,” Bridges says in Rohan Nadkarni’s story. “My first three years, I knew I could play better and help the team more. I’m glad the work is finally paying off.”

DeMar DeRozan cannot be stopped right now. … UConn star Paige Bueckers will be back tonight after knee surgery. … Colt Brennan’s family learned that CTE played a role in his death in May 2021. … After reporting that Troy Aikman could be moving to ESPN, the New York Post’s Andrew Marchand goes through the “chaotic” possibilities of NFL TV free agency. … James Harden’s Sixers debut could be tonight.

The iconic first fight between Muhammad Ali and Sonny Liston occurred on this day in 1964. (Check yesterday’s newsletter for the awesome SI cover featuring Ali in a bank vault ahead of the fight.) What now-famous quote did Ali first say in the buildup to the fight?

Check Monday’s newsletter for the answer.

Yesterday’s SIQ: In 1932, Malcolm Campbell set a new world land-speed record in the car he called the Bluebird. How fast did he go?

Campbell’s 1932 attempt was at Daytona Beach, but not at a speedway—literally on the sand of the beach. Land-speed record attempts at that time were usually made on beaches, until Utah’s Bonneville Salt Flats became the go-to location.

Campbell’s son, Donald, acquired his father’s need for speed and set a world land-speed record in 1964 at 403.1 mph. Donald remains the only person to set new speed records on land and water in the same year. (Malcolm also held the water and land records simultaneously.) Donald was killed while attempting to set a water-speed record in ’67.

It’s hard to believe that this cover was published just three years ago. The Sixers’ starting group (Tobias Harris, JJ Redick, Joel Embiid, Jimmy Butler and Ben Simmons) was put together on the fly, with Redick’s addition coming the previous offseason and Butler and Harris’s acquisitions coming via midseason trade.

The goal: build around what was seen as the best young duo in the league.

Fast forward three years and Redick is retired, Butler has been to the NBA Finals with the Heat and Simmons has been traded to the Nets. Harris and Embiid remain in Philly, but this Sixers group will likely go down in history as nothing but a flash in the pan.

Jeffery A. Salter, who photographed this cover, could sense that something was up with the team’s chemistry, he said in an interview for SI’s Full Frame newsletter series. (You can receive Full Frame by signing up for a digital subscription.)

Embiid actually wasn’t in the original photo with the other four starters. He came later and was shot by himself. The images were later combined into one.

“I just got the impression there may have been some locker room mess going on,” Salter told Rohan Nadkarni. “I got the feeling there was something going on between him and the other players.”