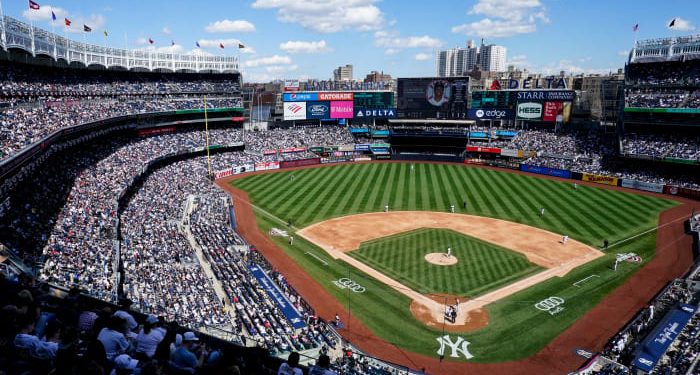 
Welcome to The Opener, where every weekday morning during the regular season you’ll get a fresh, topical column to start your day from one of SI.com’s MLB writers.

“The most immediate and pressing need is to revive the public’s flagging interest, to recapture affections which baseball has studiously alienated, to reverse the game’s downward trend in competition for the entertainment dollar.” — Red Smith, Dec. 10, 1968

Baseball has been here before. It may have stepped back from the edge of a work-stoppage cliff this season, but it remains in peril. As in 1968, the dulling of its product has eroded its fan base and that hard-to-define but easily recognized currency of entertainment known as “buzz.”

After offense in 1968 fell to 6.84 runs per game, fewer than any season except ’08, and 14 of 20 teams drew fewer than 15,000 fans per game, owners undertook a whole-house renovation. Over the next five seasons, they shrunk the strike zone, lowered the mound, changed commissioners, added four teams, expanded the playoffs and implemented the designated hitter.

Offense revived immediately. The growth of attendance and “buzz” took longer. It wasn’t until the mid-1970s—thanks to free agency—that baseball took off.

Bottoming out again, baseball is embarking on another major renovation. As it did in the wake of 1968, Major League Baseball will look extremely different over the next five years—the life of the recent collective bargaining agreement—because its attraction as a major entertainment option depends on it.

In its last pre-COVID-19 season, MLB’s attendance was down 14% from its apex in 2007, largely because games had grown 15 minutes longer. Last year fans had to wait, on average, four minutes and seven seconds between each ball in play, up 28% from ’07.

Baseball survived the lockout; now the time for change is here.

“I look at it as the start of an ongoing process and a very real collaboration with the players to get closer to the very best version of the game,” says Theo Epstein, the former Red Sox’ and Cubs’ front office executive who is now an MLB consultant specializing in modernizing the game. “It’s going to require continual observation and collaboration and, when called for, the right, subtle adjustments to make sure the product is as exciting and entertaining as possible.”

“What we learned last year,” Epstein says, when experimental rules were tried in the low minors, “is that no one thing is going to fix the strikeout rate on its own. It’s a series of small changes.”

Here are some that will be coming, many of which are designed to see hitters whiff less.

• A pitch timer, beginning in 2023. It is expected to be 14 seconds with the bases empty and 19 seconds with runners. Data from use in the minors shows the clock not only improves pace of play but also reduces strikeout and walk rates.

“Pitchers can’t quite pitch at the same max effort,” Epstein says. “They don’t have 30 seconds to fully recover physically and make each pitch as big of a production. Importantly, there was no increase in injuries.”

• A ban on infield shifts. Beginning in 2023, teams no longer will be allowed to have more than two infielders on one side of second base. Opening the field puts a premium on athleticism and incentivizes hitters to put the ball in play.

• A maximum depth for outfielders. Still in the planning stage, it may be tried in extended spring games this year, perhaps defined by a green arc painted in the grass. Initial research by MLB shows that for every 10 feet outfielders play shallower, the rate of doubles and triples increases by 2%. With analytics pushing outfielders deeper, the rate of doubles and triples has fallen 12% in 20 years.

• Bigger bases. beginning in 2023. Shortening the distance between bases by 4.5 inches should increase the stolen base success rate by one to two percentage points, according to MLB models, which should lead to more attempts. Stolen base attempts per game hit a 61-year low last season, at 0.60 per game.

• The Automated Ball/Strike System (ABS), coming as soon as 2024. In Low A last season, a tracking system using optical cameras determined balls and strikes. It is being used in Triple A this year. The automated zone is flatter and wider to combat the high fastball. Last season batters hit .198 on fastballs at the top of the strike zone and .264 on fastballs elsewhere in the zone.

• Relocation and/or expansion. MLB commissioner Rob Manfred is sitting on several markets (e.g., Nashville, Montreal, Las Vegas) that appear more lucrative than current ones (St. Petersburg, Oakland). In what can be described as a race for Nashville, Manfred must map out whether to greenlight a move there or hold it as a valuable expansion chip, which he has suggested would be worth well north of a billion dollars.

Other changes were put in place for the start of this season, and for the most part, their implementation has been seamless.

• Further crackdown on foreign substances. The monthly strikeout rate declined without exception once MLB cracked down in June on pitchers using sticky substances. But spin rates started to rise again toward the end of the season as pitchers figured a workaround to umpire inspections. In response, MLB has instructed umpires this season to inspect pitchers’ hands.

• An audio communication system for catchers to give signs to pitchers, akin to an NFL coach communicating with the quarterback. A boon to pace of play, PitchCom underwent testing in spring training and was approved for teams to use it during the regular season, though some clubs are choosing to relay signs the old-fashioned way.

It works like this: The catcher wears a forearm sleeve with nine buttons that correspond with specific pitches and locations. The pitcher wears a receiver in his cap, which tells him what pitch the catcher is signaling. Up to three other position players (usually the two middle infielders and center fielder) also wear the receiver, so they can adjust their positioning based on what pitch is being thrown. So far, the only hiccup came in Saturday’s Yankees-Red Sox game, when Luis Severino forgot to wear his device on the mound.

• More streaming and gambling. Apple TV+ and Peacock are streaming games this year. Several ballparks already have betting parlors, but the future there includes seatback devices or apps that allow fans to engage in proprietary betting action.

Change in baseball is met with more resistance than in other sports. But after predictable howls of protest, changes to the slide rule at second base, to the virtual outlawing of catcher collisions and to the midseason crackdown on sticky substances led to little more than a few weeks of bellyaching.

To think even bigger, baseball needs to repair the distrust between owners and players the CBA negotiations exposed. When the agreement was reached to save the 162-game season, there was no joint press conference. The two sides retreated to their respective corners, casting the same wary eyes at each other.

Asked whether he expected the next five years to be better and more harmonious than the previous handful, Astros pitcher Justin Verlander says, “I hope so. That’s to be determined. We have to see how the adjustments we made play out.”

In 1968, 22-year-old Reggie Jackson hit 29 home runs for the A’s. Only three players in the American League hit more. In the wake of subsequent changes, Jackson and the game thrived. The brash slugger was at the nexus of free agency, athleticism, more offense, the DH and the flourishing of personality. Reggie (one name was enough) personified the new game.

Jackson is 75 now. He works as an adviser to Astros owner Jim Crane. In spring training he pulled on a Houston uniform as a rare professor emeritus of the game, lending advice to players born long after he played his last game in 1987.

“What do I think of the game?” he says. “There are no baseball people in the game. They’re gone.” Jackson is careful not to say these lifers have been pushed out, but organizations no longer value them as they once did.

During CBA negotiations, players routinely took shots at Manfred. Meanwhile, from the comfort of “rebuilds,” the consecutive losing seasons of the Orioles and Tigers (five), Pirates and Royals (six), and Marlins (11) all included payrolls of less than $100 million last season.

Such is the distrust on both sides, as Jackson put it, “Now I have to watch you when you go into the kitchen when I make chocolate chip cookies.”

It is time to share the cookies instead of swiping them. Under the new CBA, active players for the first time will sit on the Competition Committee, which was established in 2017. This year, the committee will consist of four current players, six MLB-appointed members and one umpire. It’s a start. Changes are coming. But changes succeed only with trust.

More MLB Coverage:
• The Yankees Can’t Replace Aaron Judge. That’s Why He Rejected Them.
• The Making of a Giants Ace: Inside Logan Webb’s Star Turn
• The Angels Finally Have the Pitching to Make Playoffs—Maybe
• We Haven’t Seen the Best of Shohei Ohtani
• Remember Mike Trout? MLB’s Best Player Is Back With More to Prove