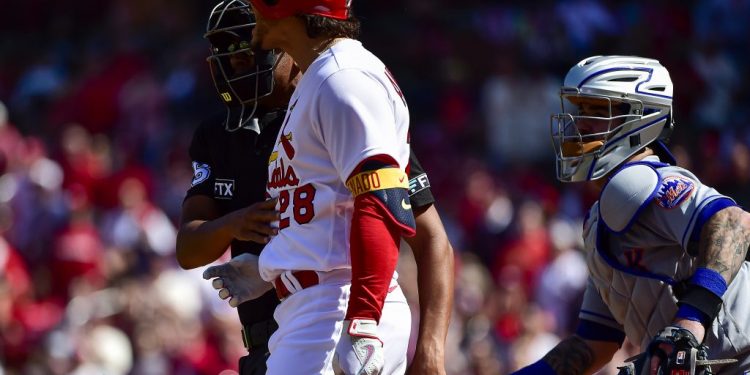 6:27pm: Jeff Jones of the Belleville News-Democrat tweets that Arenado is continuing with his pre-game routine, indicating he’s appealing his suspension. The Cards announced that Cabrera has accepted his suspension and will serve it tonight; he’d likely not have been available anyhow after throwing 29 pitches yesterday.

6:15pm: Major League Baseball announced this evening that Cardinals star third baseman Nolan Arenado and reliever Génesis Cabrera have each been suspended for their roles in yesterday’s bench-clearing incident with the Mets at Busch Stadium. Arenado was suspended for two games, while Cabrera received a one-game ban. Arenado and Cabrera are set to serve their suspensions beginning with tonight’s game against the D-Backs, although each player could delay that by appealing. It isn’t yet clear whether either plans to do so.

Arenado took exception to a first-pitch fastball from Mets’ reliever Yoan López that sailed up-and-in. He and López began jawing and the dugouts and bullpens emptied, with the teams coming together at home plate.  That came a half-inning after Cabrera hit J.D. Davis on the foot with an offering. Arenado and St. Louis first base coach Stubby Clapp were ejected for their roles in the scrum. (Cabrera was suspended “for his actions during the incident,” not because the league determined he’d thrown at Davis intentionally).

No Mets were ejected or suspended. López was handed an undisclosed fine for contributing to the benches clearing. St. Louis starter Jack Flaherty and Mets starter Taijuan Walker were each hit with fines for participating in the argument while on the injured list.