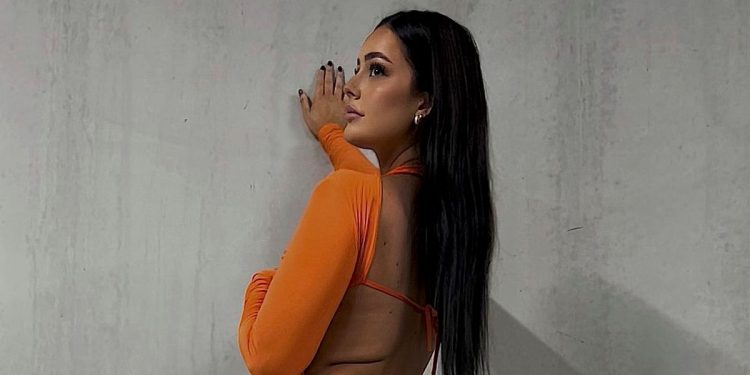 
An extreme new fashion trend is sweeping across Instagram, but the risqué look has fashionistas divided as some say it’’s “insane”.

Most of us are used to seeing a flash of underboob, short skirts, cut out midriffs and even trousers with a built in G-string on social media, but that latest “butt cleavage” craze goes even further.

Model Sarah Louise flaunted her curvaceous figure in a bright orange maxi dress from PrettyLittleThing on Tuesday which boasted a cut out in a rather cheeky area.

The long, carrot orange gown featured long sleeves and a floor grazing skirt, but the skin tight outfit flaunted the model’s slender back as it tied together around the ribs and neck.

But, it was the skirt that set chins wagging online as the maxi shape was entirely cut out at the back from the base of her butt to the ankles.

A number of tie ribbons kept the dress together at the bottom, but the split was high enough that it revealed a flash of the model’s booty.

The cheeky style leaves little to the imagination thanks to its “under-butt cleavage” design which is usually only seen when people wear very short hot pants.

People went wild for the look which people called “next level” and many said they were “obsessed”.

Plus, Sarah isn’t the only model to flash her under-butt in the name of fashion.

Over, on the PrettyLittleThing Instagram page Barbie Blank Coba wore a pair of jeans in a baggy style that featured a large gash in the distressed design that flashed the lower part of her butt to the camera.

People loved the sexy outfit with many calling the look “cute” and leaving fire emojis.

The trend is likely blowing up in the wake of Rihanna’s headline hitting look for her Savage x Fenty lingerie line where she flaunted her peachy butt in a pair of blue, tartan short.

Posing on her Instagram Stories, the superstar singer donned the pants with a lace waistband before turning around to show a large cutout on her behind.

The detail was complete with a small, adjustable tie above her butt.

And, in June, the Savage x Fenty range launched a pair of leggings with a revealing cut out layered with cross-ties above the bum that flashed the top of the model’s bum cheeks.

The leggings went viral on TikTok last year where some said we should “normalise butt cleavage” and others thought the trend was “sexy”.

But, others were put off by the look and thought it went too far and “wasn’t practical”.

One commenter said: “I love Rihanna, but these Fenty gym leggings are trash.”

Another added: “These bum-cleavage Savage X Fenty leggings are making me want a refund on being alive.”

A third said: “I thought this was called plumber’s crack.”