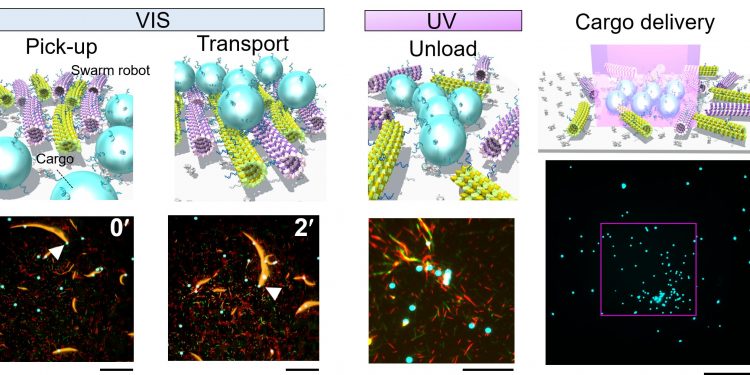 
In a global first, scientists have demonstrated that molecular robots are able to accomplish cargo delivery by employing a strategy of swarming, achieving a transport efficiency five times greater than that of single robots.

Swarm robotics is a new discipline, inspired by the cooperative behavior of living organisms, that focuses on the fabrication of robots and their utilization in swarms to accomplish complex tasks. A swarm is an orderly collective behavior of multiple individuals. Macro-scale swarm robots have been developed and employed for a variety of applications, such as transporting and accumulating cargo, forming shapes, and building complex structures.

A swarm of cooperating robots gains a number of characteristics which are not found in individual robots—they can divide a workload, respond to risks, and even create complex structures in response to changes in the environment. Microrobots and machines at the micro- and nano-scale have very few practical applications due to their size; if they could cooperate in swarms, their potential uses would increase massively.

The team constructed about five million single molecular machines. These machines were composed of two biological components: microtubules linked to DNA, which allowed them to swarm; and kinesin, which were actuators capable of transporting the microtubules. The DNA was combined with a light-sensitive compound called azobenzene that functioned as a sensor, allowing for control of swarming. When exposed to visible light, changes in the structure of azobenzene caused the DNA to form double strands and led to the microtubules forming swarms. Exposure to UV light reversed this process.

The cargo used in the experiments consisted of polystyrene beads of diameters ranging from micrometers to tens of micrometers. These beads were treated with azobenzene-linked DNA; thus, the cargo was loaded when exposed to visible light and unloaded when exposed to UV light. However, the DNA and azobenzene used in the molecular machines and the cargo were different, so swarming could be controlled independently of cargo-loading.

By demonstrating that molecular machines can be designed to swarm and cooperate to transport cargo with high efficiency, this study has laid the groundwork for the application of microrobots to various fields. “In the near future, we expect to see microrobot swarms used in drug delivery, contaminant collection, molecular power generation devices, and micro-detection devices,” says Akira Kakugo.