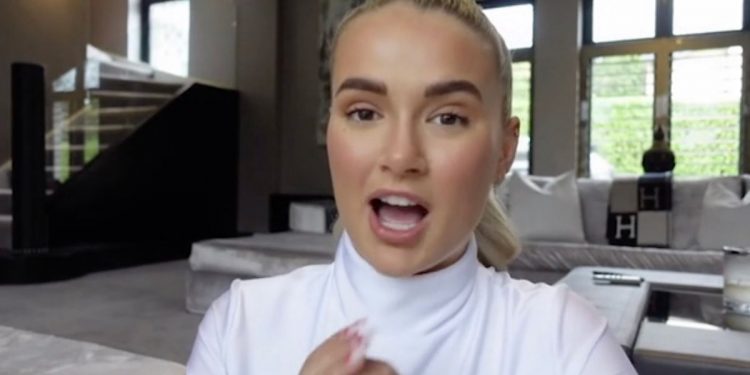 
Molly-Mae Hague has told fans that she no longer splashes out on designer clothes… while wearing a £285 Alexander Wang top.

The 22-year-old PrettyLittleThing creative director says her interest in expensive clothes has diminished after burglars stole £800k worth of belongings in a raid.

Wearing the pricey turtle neck jumper with the designer’s name printed across the chest, Molly was asked if her views on having nice things had chanced since the break in.

Speaking on her YouTube channel she replied: “It’s something I’ve been thinking about a lot recently. The answer to that is 100% yes.”

“In regards to the jewellery I used to buy, watches, nice bags, really expensive clothes and stuff, I think most definitely, definitely, the interest in that for me has just disappeared since the robbery.

“Why would I ever want to own something that could compromise mine and Tommy’s safety? It is absolutely not worth it in my eyes.”

The luxurious flat that she shared with Tommy was targeted in October last year when the couple were in London at her Beauty Works Christmas launch.

The thieves stole jewellery, designer products and other valuables from the couple.

The former Love Island star says that she has moved on from the break in, and said she spends “thousands and thousands of pounds a month having the right security”.

Justifying the choice, Molly-Mae said: “I feel like people could respond, ‘who does she think she is, why has she got security?’ It’s genuinely for no other reason than it makes me feel more safe.”

The star also said on her podcast that the year hadn’t got off to the best start.

She said that she “lost herself” and was “really, really upset” after the backlash from an interview she gave to Diary of an CEO.

Listeners were furious after her “we all have the same 24 hours in a day” comment.

Molly replied: “The reality is things don’t always go the way you planned, and the start of the year definitely had different plans for me than I’d hoped, which is fine.

“But I definitely think that now things are started to get back on track. I definitely feel a lot more like myself.”

She added: “The start of the year, it just was a bit of a jumble, a lot was going on and I definitely lost myself in the first few weeks and felt really disheartened that I had quite a negative start to the year.

But Molly, who was branded “tone deaf” after the interview, has put the incident behind her and moved on.

She said: “I’m quite good at starting a new chapter, pushing things behind me and moving on.

“In this life if I dwelled on every bad thing that was said about me, or every negative comment that I receive, or everything that doesn’t go the way I plan it to, I would probably never get out of bed!”

Why buyers really aren’t liars: Learning what they want in a home