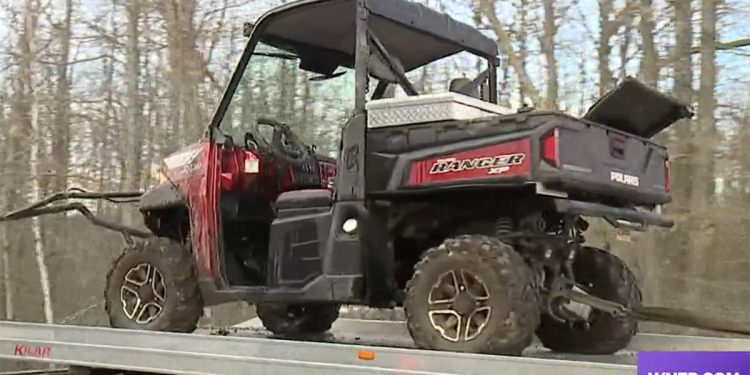 
What was supposed to be a family fun day has turned into the ultimate tragedy.

A mother from Jermyn, Pennsylvania has been confirmed dead after she drowned in an ATV accident while riding with her two young children and husband on Saturday at Aylesworth Park. According to the Lackawanna County Coroner’s Office via NBC News on Monday, Jamie Uchic’s cause of death was deemed an accidental drowning after her vehicle was submerged in a deep puddle.

Archbald Police Chief Tim Trently explained to the outlet on Saturday that the ATV drove into a puddle that was much deeper than expected – approximately four to five feet deep! It then rolled over and was completely submerged in the water. Jamie, 37, was unable to free herself, but her husband Steve Uchic was able to get himself and their children, Weston and Arya, out safely.

Horrifyingly, it then took Steve about 45 minutes to find help for his wife because they were riding on private property at the time, a spot often used by other riders to pass through the area but isolated from most people, according to The Times-Tribune. We cannot imagine how devastating that walk into town must have been…

A GoFundMe page was set up on Monday “to help Steve lessen the burdens of everyday expenses and also in helping her children that were left behind.” The statement about the fundraiser read:

“The Uchic family is not just your ordinary family. They’re a family of love, life and all things fun! From taking something so simple and laughing with it – to finding light in any situation, they know how to enjoy one another and all things around them.”

On the deceased 37-year-old, the letter continued:

“Jamie was a beautiful soul. She worked in an environment where her needs were last, and others were first, always making sure to do the best she could in any given circumstance.”

Comments from donors suggest she worked as a Therapeutic Support Staff and a special education assistant who helped children diagnosed with autism.

She was clearly beloved by so many as the note concluded:

“Jamie was a wife to Steve, her other half, who loved everything about her as they were the two best friends and shared so many interests. A mother of two exceptional children, Weston & Arya, raising them to be such incredible individuals that showcase a part of Jamie within themselves. Jamie surrounded herself with great people she valued, loved and considered family.”

Absolutely heartbreaking. Those who wish to donate to the Uchic family can do so HERE. We’re sending love to all those mourning Jamie’s untimely loss. R.I.P.