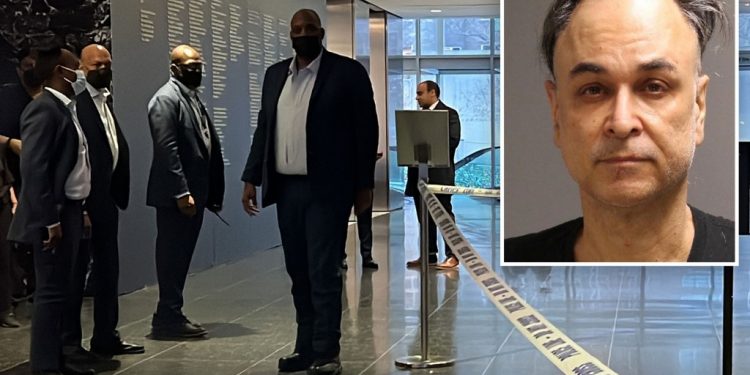 
The madman caught on video stabbing two people at the Museum of Modern Art last Saturday once mailed a dead rat to a boss after being fired as an usher at a Broadway theater, a former co-worker told The Post.

Gary Cabana, 60, is accused of slashing two MoMA employees after they told him his membership had been revoked.

Cabana was canned from his full-time gig at the Nederlander Theater on 41st Street — famed for debuting “Rent” — in January. Afterward, on Jan. 2, the twisted culture buff was allegedly bounced from the theater, then punched his ex-manager in the face, cops said.

“He was very upset with them and he was pretty much banned from coming back into the theater, and I think that’s what kind of made him snap,” said Cabana’s ex-colleague, who requested anonymity out of fear.

“After he was let go, he was upset with somebody at the office of the Nederlander, so he sent them a dead rat in a shoebox. … That was out of character, or so we thought.”

The subject of his alleged rodent wrath was labor relations executive Anthony LaTorella. The Post viewed a photo of a large dead rat inside inside a shoebox with the message, “LaTorella is a RAT,” scrawled on the lid. A rep for the NYPD confirmed a report of a dead rat in a box left outside the Nederlander on Jan. 4 at 3:30 a.m.

It isn’t clear why the theater fired Cabana. LaTorella and The Nederlander did not return messages seeking comment.

Cabana apparently suffers from mental illness, writing on Facebook after the alleged stabbings: “Bipolar is a tough road [sic] to hoe.”

He was collared in Philadelphia on Tuesday, and charged with arson after allegedly setting his hotel room on fire while on the lam. New York cops plan to seek his extradition.

Cabana’s ex-coworker described him as “very pleasant” and a person who kept to himself.

“That’s why when I heard the news my jaw hit the floor,” she said. “He was always a little bit eccentric, but not this level.”

“THEY R THE ENEMY IN OUR MIDST. Root them out. Lock them UP. Segregate them,” he ranted on Facebook.

Cabana called for people to “take arms” against Republicans sick with COVID-19.

“Strike now while the Repubs R SICK and weak from Covid-19 (AND STILL SPREADING THE VIRUS). We need to DOUBLE-CAP these VIRUS-ZOMBIES,” he wrote.

He also fantasized about Donald Trump.

“GO TO MAR-A-LAGO AND CUT THE HEAD OFF THE SNAKE,” he wrote. “U r on the wrong side of history & u let a stupid greedy old man take charge of the country for 4 yrs. Take his life or take your own. The [world] is moving forward without u!”