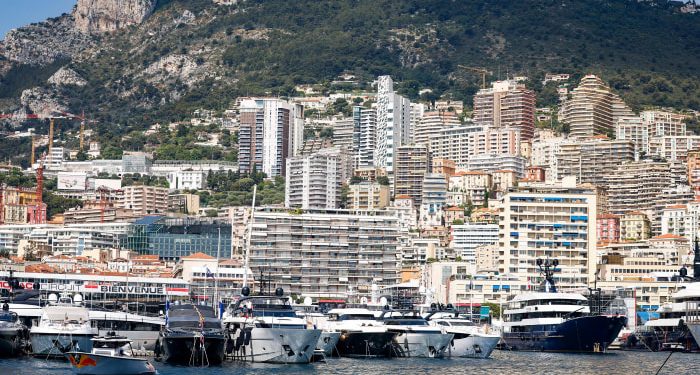 
The Monaco Grand Prix is the crown jewel of Formula One.

It has held a coveted spot on the sport’s exclusive schedule since 1995, only being skipped once in 2020 due to the COVID-19 pandemic. But the track has been around since 1215, kind of. That’s when it’s said that Monaco’s modern history began.

The iconic street circuit may be incredibly narrow, making it difficult on drivers to overtake, but it highlights some of the best locations in the city: the Casino Square, the tunnel section and the always memorable, incredibly fast swimming pool section.

It’s a grueling weekend, and as George Russell told Sports Illustrated in this week’s Fuel for Thought, “it’s nonstop.”

“You don’t have a second breath,” Russell said. “You’ve got to be on every single second because a one-centimeter mistake can be the the end of your whole weekend, whereas on an ordinary circuit, you have a bit more margin.”

Russell first competed in the F1 Monaco Grand Prix in 2019, and although he started 19th and finished 15th, his favorite memory at this track comes from that season. He remembers the drivers parade and going up the hill after the first corner. When he turned around at the top, he saw the breathtaking sight of the high rise apartments, balconies, grandstands and harbor, along with thousands of fans looking back at him.

Russell remembers thinking, “’In an hour’s time, we’re going to be racing through this street that is eight meters wide between guardrails at 200 miles an hour, and all these people are here to watch us do that.’ That was probably a moment that sort of gave me goosebumps in a way.”

Here are some of the top storylines heading into the Monaco Grand Prix.

For obvious reasons, a driver’s home race means just a little bit more. And while Ferrari’s Charles Leclerc is one of Monaco’s most successful F1 stars, disaster seems to strike for him when he’s competing at home.

The 24-year-old has yet to finish a race at home.

This streak dates back to 2018 during his Alfa Romeo days for Formula One, but the season before, Leclerc was forced to retire after snagging the pole position in Formula Two.

Just earlier this month at the Monaco Historic Grand Prix, Leclerc crashed the iconic 1974 Ferrari driven by three-time champion Niki Lauda. The team later announced that the cause of the crash was an issue with the car’s brakes, and afterward, the 24-year-old took to Twitter to express his embarrassment at the accident.

However, Leclerc had the fastest pace during both of Friday’s practices (and had no incident).

Will Mercedes be able to pick up where it left off in Barcelona?

This season did not start the way Mercedes expected as it faced car woes, including major porpoising.

Russell revealed after Imola that he felt real pain from the bouncing, but the team made improvements after Miami. It showed at the Spanish Grand Prix as Lewis Hamilton climbed from P19 (after colliding with Kevin Magnussen) to P5 and Russell finished P3 after defending eventual Grand Prix winner Max Verstappen and Red Bull’s Sergio Pérez for a significant number of laps.

The jury is still out, though, on if this will continue in Monaco.

Hamilton revealed after Friday’s practice that he has not experienced anything like the bouncing on the Monte Carlo circuit. During the first session, he could be heard over the Mercedes radio saying, “It’s so bouncy out here, man, I’m losing my f—ing mind!”

“It is in the low speed [corners], it is not aero and the bumps in the track are making it worse, so it is not a case of learning how to drive the track … it is just fighting the car. Putting the lap together is, wow … holy crap … I have not experienced it like that before.”

He continued, “I remember back in the day my first years here, a light nimble car was so much better. But now we have these super heavy cars and the braking zones are different.

“It is crazy it is 2022 and the tracks aren’t as smooth when they are resurfaced, technology is still against us. But I think we made some improvements going into that session, and when you do put a lap together, the grip doesn’t feel too bad. It is just eyeballs coming out the sockets.”

Should F1 continue to race in Monaco?

With the introduction of the Saudi Arabian Grand Prix in 2021, the Miami Grand Prix this year and the Las Vegas Grand Prix coming in 2023, one question that has started to surface is whether the sport should continue to race in the legendary Monaco.

The track is incredibly narrow, limiting the ability for the new generation of cars to overtake. As Hamilton highlighted, the vehicles are also heavier now. But can you have Formula One without Monaco?

“It’s unimaginable to think of Formula 1 without Monaco; it is the jewel in the crown. But you know, everything does evolve over time,” Red Bull team principal Christian Horner said ahead of the Miami Grand Prix. “And, you know, when you look at Wimbledon, they now have a roof when it rains. So, they’ve got to move as the sport continues to grow. And I think that if Monaco was a new circuit coming on to the calendar now, and they said, ‘Well, you’re going to have the lowest fee of every single circuit, you’re going to go there you can’t overtake,’ it would never be accepted onto the calendar.

“So we accommodate Monaco because of its heritage and because of its history. That’s it … If you stand still, then you’re going backwards, and I think that applies to all aspects of the sport.”

Several of the drivers acknowledged how the cars have evolved and echoed how if the race was proposed today today, there’s a chance it probably would not be added to the exclusive schedule. But, the history makes it hard to eliminate entirely.

“When you think about Formula One, a lot of people think about Monaco. So yeah, it would be nice to put an overtaking place; I’m not going to lie,” Carlos Sainz said during Friday’s press conference. “Like the show could be a bit better on Sunday, but even if not, I still think everyone knows a weekend here is about qualifying, around the pitstops. And everyone is already expecting that.”

Leclerc said, per motorsport.com, earlier in the week, “I think it would be a bad move for both parties now. I’ve never known Monaco without F1, apart from for COVID reasons in 2020.

“And F1 without Monaco for me is not F1. I think F1 has a history, has some historic tracks like Silverstone, like Monza, and like Monaco too, and I think they should stay in the calendar.”