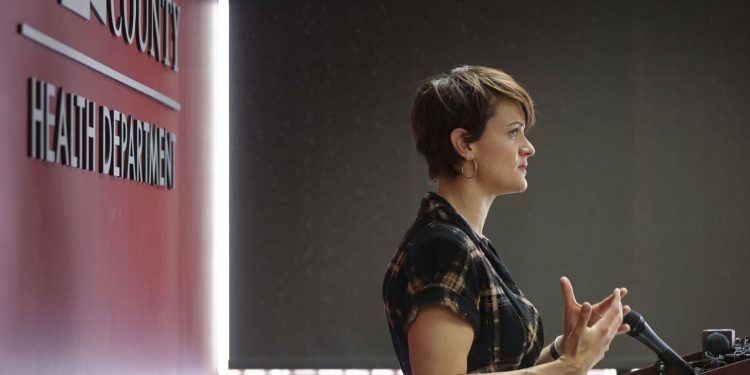 Monkeypox is believed to be in Utah.

Two adults in the same Salt Lake County household “are considered probable monkeypox cases,” the Salt Lake County Health Department announced Monday, based on preliminary testing. Confirmation that the rare disease has come to the state is expected from the Centers for Disease Control and Prevention on Tuesday.

“There is no risk to the general public due to these probable monkeypox cases,” the county health department’s executive director, Dr. Angela Dunn, told reporters, adding that the disease is “very rare” and “does not easily spread from human to human. We’re not talking about COVID here.”

She said this is “not a reason to panic,” especially given that only about 100 cases have been seen worldwide.

Utah is the only state so far with more than one monkeypox case. In Massachusetts, monkeypox has been confirmed in a man who traveled to Canada, while a man in New York City and another in Florida who also traveled internationally are waiting confirmation they have the disease.

All of the cases involve men, according to Jennifer McQuiston, deputy director of the CDC Division of High Consequence Pathogens and Pathology, who declined to share specifics of their travel during a virtual news conference later Monday.

Both of Utah’s infected individuals have agreed to remain at home in isolation until their rash is gone, Dunn said, and all the people who have been in close contact with them are expected to have been reached by the county or Utah Department of Health by the end of the day.

None have been asked to quarantine because none had a high-risk exposure to the disease, she said. Instead, they’ve been told to monitor themselves for symptoms over the next 21 days, Dunn said, since people with the disease are not contagious prior to symptoms appearing.

She said the infected individuals started showing symptoms after traveling to Europe earlier this month to an area with monkeypox cases, adding their illness is mild and they are expected to fully recover. The pair saw their health care provider on Friday, who “immediately told them to isolate and called public health,” Dunn said.

Within 24 hours, she said their illness was identified as an orthopox virus infection through testing by the state laboratory, part of a family of diseases that also includes smallpox, although further testing is needed by the CDC to confirm it is monkeypox.

The county health department did not release any additional information about the suspected cases, citing medical privacy laws.

Belgium is the first nation to impose a quarantine for those with the disease, usually found only in Africa, but President Joe Biden said Monday he did not believe that would be necessary in the United States.

“I just don’t think it rises to the level of the kind of concern that existed with COVID-19, and the smallpox vaccine works for it,” Biden said at a news conference in Japan on Monday, The Washington Post reported. Sunday, the president told reporters that monkeypox is a “concern in that if it were to spread, it would be consequential.”

Monkeypox, spread primarily through direct contact with body fluids, including the pustules that accompany the disease, has been identified in at least a dozen countries by the World Health Organization. Besides Africa and the United States, several European nations have seen the disease as well as Australia and Canada.

The county health department said monkeypox symptoms include fever, headache, muscle aches, exhaustion and swollen lymph nodes, along with a rash that often starts on the face before spreading to other parts of the body and turning into fluid-filled bumps that eventually scab over and fall off.

She advised anyone who has traveled recently to places where monkeypox is spreading, or have come into contact with someone who has a rash “to be on the lookout for symptoms and contact their provider if they do have them.”

Besides person-to-person contact involving body fluids, like prolonged touching, kissing or sex, or being close to someone for several hours, Dunn said the disease can also be spread through contact with clothing, bed linens or other materials contaminated with the pustules.

She said the disease is “spreading particularly” in the gay community, especially in men, and the county “will work with our partners, especially ahead of Pride Week, to make sure everyone involved in those activities understand the risks and how to protect themselves.”

A CDC post on the disease states the federal agency is “tracking multiple clusters of monkeypox that have been reported in early to mid-May in several countries that don’t normally report monkeypox, including in Europe and North America.”

The cases “include people who self-identify as men who have sex with men. CDC is urging healthcare providers in the U.S. to be alert for patients who have rash illnesses consistent with monkeypox, regardless of whether they have travel or specific risk factors for monkeypox and regardless of gender or sexual orientation.”

The disease can be serious, killing about 10% of those infected in Africa, but Dunn said she expects the death rate to be “much, much lower” in the United States because of better access to health care. Someone with a weakened immune system could experience a more severe case of monkeypox, she said.

Utahns traveling internationally should review the CDC’s current recommendations for their destinations and take precautions including “frequent, thorough hand washing; avoiding contact with animals; and avoiding close contact with people who have symptoms of illness,” the county health department said.

Appointments can also be scheduled with the Salt Lake County Health Department Travel Clinic for more information by calling 385-468-4111, and more information about monkeypox is available on the CDC website, at CDC.gov/monkeypox.

The Utah Department of Health had no comment on the disease’s presence in the state.

“We are respecting the role Salt Lake County Health Department has as the lead agency on this response and will be referring comments to their agency at this time. We are working closely with their team on the response,” state health department spokeswoman Jenny Johnson said.

Trea Turner is a reminder of what Nationals' future could be