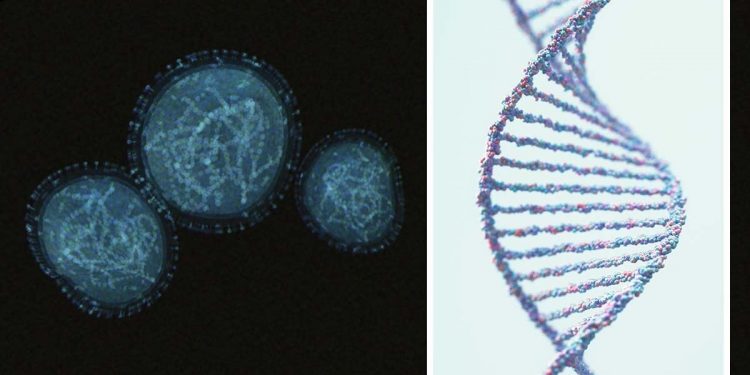 Monkeypox: Joe Biden says ‘everyone should be concerned’

Monkeypox — a close relative of smallpox — is a viral disease typically contracted from animal bites or the consumption of improperly cooked meat, but that can spread from person-to-person by close contact. Initial symptoms of infection can include chills, fatigue, fever, and muscle aches — with more severe cases often presenting with a rash on the face and genitals that can spread elsewhere on the body before scabbing over. The virus is known to cause severe disease among certain vulnerable groups, including young children, people who are immunosuppressed and pregnant women.

According to the World Health Organization, there have now been at least 131 confirmed cases of monkeypox worldwide, outside of the countries where the virus normally spreads, since the outbreak was first reported on May 7 this year.

On top of this, there are at least 106 further suspected cases.

Reported cases of the virus in Britain have almost tripled over recent days, reaching a total of 57, with one sole case in Scotland and all the rest having been detected in England.

Health experts have said that the risk to the general public remains low, with the disease unlikely to result in a nationwide epidemic like COVID-19, but have cautioned that it is still “a serious outbreak of a serious disease”.

The European Commissioner for Health and Food Safety, Stella Kyriakides, has said that despite the low risk, it is important to “remain vigilant” and ensure adequate contact tracing and diagnostics capacity is maintained to keep track of the disease’s spread.

Pictured: a tree of the first draft genome sequence of the outbreak and 52 other monkeypox viruses (Image: Isidro et al. / virological.org)

The first draft genome sequence of the monkeypox virus associated with the current multicountry outbreak was produced from a confirmed case in Portugal and published last week.

In their new study, microbial genomicist Dr Vitor Borges of the National Institute of Health Dr Ricardo Jorge (INSA) in Lisbon and his colleagues have followed up on this by releasing nine additional genome sequences of the virus.

The genomic sequences were derived from samples taken from nine monkeypox patients in Portugal between May 15–17 this year.

The team used an analytical method called “high-throughput shotgun metagenomics”, in which DNA is sheared into many short sections which are then independently sequenced.

These short sequences are then reconstructed into a larger-scale consequence sequence.

The team said they have ‘detected the first signs of microevolution within the outbreak cluster’ (Image: Isidro et al. / virological.org)

Based on their analyses of the sequences, the team have come to a number of conclusions about the variant of monkeypox responsible for the recent outbreaks.

They said: “The multi-country outbreak most likely has a single origin.”

This, they explained, can be inferred from the fact that “all sequenced viruses released so far [are] tightly clustering together”.

The new sequences also appear to confirm the findings of the first draft sequence, which suggested that the outbreak virus belongs to the West African clade.

Furthermore, the researchers noted, the outbreak variant appears to be most closely related to viruses associated with the exportation of monkeypox from Nigeria to several countries — including the UK, Israel, and Singapore — back in 2018–2019.

However, they reported, the outbreak virus diverges a mean of 50 single nucleotide polymorphisms from those 2018–2019 viruses.

This, they added, is “far more than one would expect considering the estimated substitution rate for Orthopoxviruses”.

Orthopoxvirus is a genus of 12 species of viruses that are known to affect vertebrates — including humans and mammals — and arthropods. They are responsible for such diseases as smallpox, cowpox and monkeypox.

The researchers said that they “cannot discard the hypothesis that the divergent branch results from an evolutionary jump — leading to a hypermutated virus — caused by APOBEC3 editing”.

APOBEC3G is a human enzyme thought to play an important role in anti-viral immunity by mutating and inactivating viral genomes via single-strand DNA editing.

In this way, monkeypox may have been naturally mutated by APOBEC3G during a previous infection of a human patient.

The team added: “We have already detected the first signs of microevolution within the outbreak cluster, namely the emergence of seven single nucleotide polymorphisms.”

These, they said, have led to “three descendant branches, including a further sub-cluster — supported by two single nucleotide polymorphisms — involving two sequences”.

The two latter sequences include gene losses comparable to those already observed in the context of endemic monkeypox circulation in Central Africa that are believed to result from human-to-human transmission.

The full findings of the study, which have not been peer-reviewed, were published on the virological.org discussion forums.