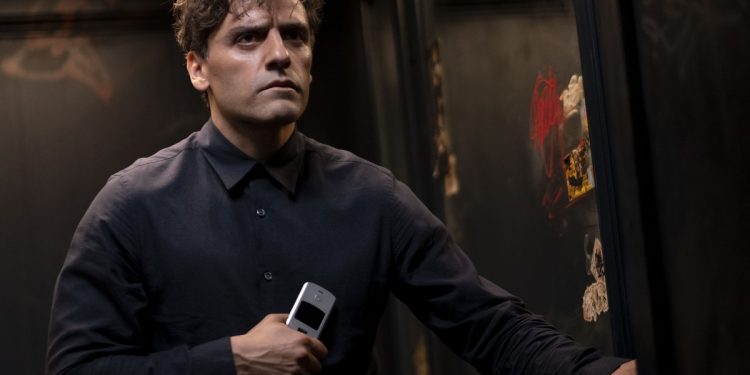 
Of course, it’s not long before Steven finds himself out of bed and into trouble. Having traveled some way while attempting forty winks, he’s suddenly in imminent danger. He appears to have been on a mission to steal a golden scarab from the possession of one Arthur Harrow (Ethan Hawke, clearly having the time of his life), a deadly cult leader who is dishing out mortal punishments on behalf of the Egyptian goddess Ammit. She can apparently tell if your misdeeds outweigh your good ones. And if those misdeeds happen to be part of some muddy future that hasn’t transpired yet? Yeah, she’ll nip those right in the bud.

Harrow is established as our bad guy when he passes judgement on a couple of his followers using a mysterious cane and a tattoo of some scales, and it comes across as quite silly despite Hawke’s enigmatic scenery chewing, even before the disturbing sequence descends into slapstick. In fact, there’s a lot of really cool stuff in this episode that ends up a little smudged by either its underwhelming CG or Isaac’s quirky central performance as the flappable Steven, which is unfortunate.

This is also the point in the episode where things inevitably get confusing, as a panicking Steven flips back and forth between his own identity and that of Marc Spector, a mercenary who seems to be working with the Egyptian moon god Khonshu. Moon Knight fans who were curious about how the MCU would handle Spector’s brutal fighting style will probably be a bit miffed to discover that this first episode mostly uses cuts between these two identities to skip past Marc’s bloodier moments rather than put them on full display, keeping such battles as Disney-friendly as possible.

The back half of the episode concerns itself with helping Steven start to understand that his meagre life has been a sham by way of his reflected interactions with Marc, during which time he is stalked by Khonshu. Not for nothing, I love the way Khonshu has been designed for the series, he really does look perfect! Casting F. Murray Abraham as the voice of the moon god is a masterstroke.

Steven also learns that a woman called Layla (we can probably assume that this is the MCU’s version of Marlene from the comics) has been looking for Marc for a long time, before the villainous Harrow gives Steven a quiet, exposition-y talk on Ammit and how if she was around she would have totally just killed baby Hitler/Pol Pot/whatever, just like the Thanos-strangling Rhodey! Hoo boy.

Eventually we get to see some brief, fully suited-up Moon Knight action when Steven allows the Marc identity to take over his body to school one of Harrow’s conjured jackals, and some museum facilities end up looking pretty much like an average public toilet in the UK. Probably better, if we include UK music festivals.

Summer and Fall in Angie’s Garden

Summer and Fall in Angie’s Garden