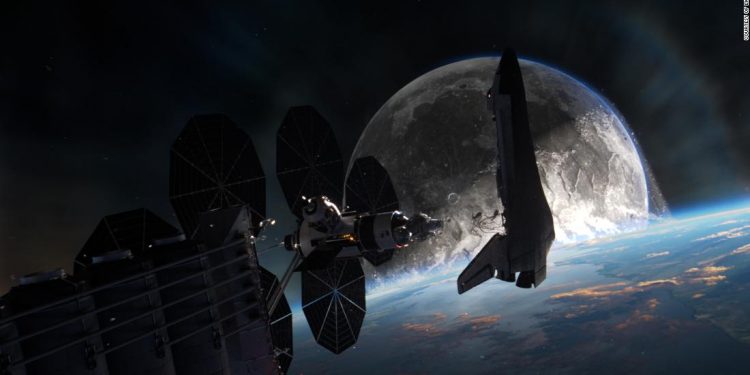 Emmerich knows the drill, having directed “Independence Day,” a misguided 2016 sequel, and the climate-change nightmare “The Day After Tomorrow.” “Moonfall” shares DNA with all of them, but its most obvious antecedent might be “Armageddon,” another film that required dispatching a crew into space on a seemingly impossible mission to save the world.

Not surprisingly, the central players here bring their share of baggage to the task at hand. Astronauts Jo Fowler (Halle Berry) and Brian Harper (Patrick Wilson) are introduced on an ill-fated space flight, one that leaves his career and life in shambles.

A decade later, and Jo holds a high-ranking job at NASA while Brian struggles to pay his bills. Enter an amateur astronomer, K.C. Houseman (“Game of Thrones'” John Bradley), who notices that the moon is behaving strangely, with some mysterious force altering its orbit and threatening to destroy the Earth, or large parts of it, in a matter of weeks. (Before anyone thinks the premise recalls that of “Don’t Look Up,” it is a similar idea, but totally different tone and execution.)

Emmerich shares script credit with Harald Kloser and Spenser Cohen, and to call the underlying plot convoluted would be an understatement. At one point, Donald Sutherland shows up at an unlikely location, blurts out some helpful information about a government coverup faster than you can say “JFK” and disappears almost as quickly.

Beyond that, the cast gets saddled with absurd situations and clunky dialogue, including an alternating structure between those heading into space to save humanity and their relatives (because, hey, it’s all about family) fighting to survive while all hell breaks loose back home.

Bradley might be the only one to emerge unscathed from the wreckage, making the most of what’s essentially the Jeff Goldblum role in “Independence Day” as the resourceful outsider (and relatable nerd) who outsmarts all the NASA brainiacs, after having been dismissed as a crackpot.

Those parallels underscore how derivative “Moonfall” feels, which makes Emmerich’s recent interview, in which he lamented about comic-book movies “ruining” the film industry, rather galling. Although it’s obviously true that Hollywood’s reliance on sequels makes it more difficult to gamble on big original concepts, as the director suggests, that argument doesn’t carry much weight when promoting a vehicle that recycles past hits, just with a different (and particularly literal) the-sky-is-falling disaster.

Charitably, the movie does possess a certain can-do spirit, without as much of the bring-the-world-together vibe sometimes associated with the genre.

“Moonfall” might have already been a long shot to light up the box office, in part for the reasons Emmerich has outlined, but a less headache-inducing premise surely would have helped its cause.

“I didn’t come this far to fail,” Brian states with square-jawed earnestness.

But in terms of the movie, if not the mission, by then, it’s already too late.

GPOD on the Road: Sicily

GPOD on the Road: Sicily