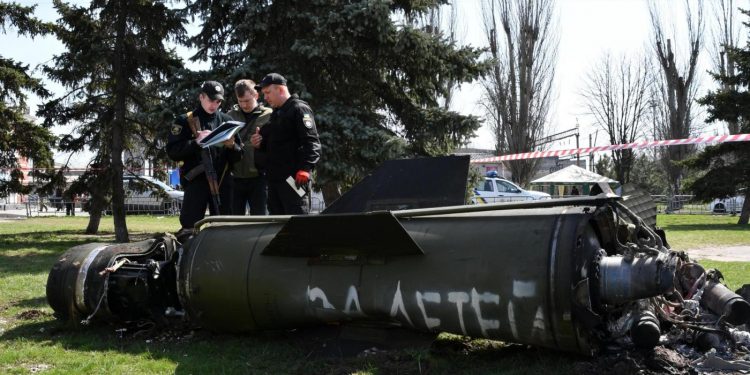 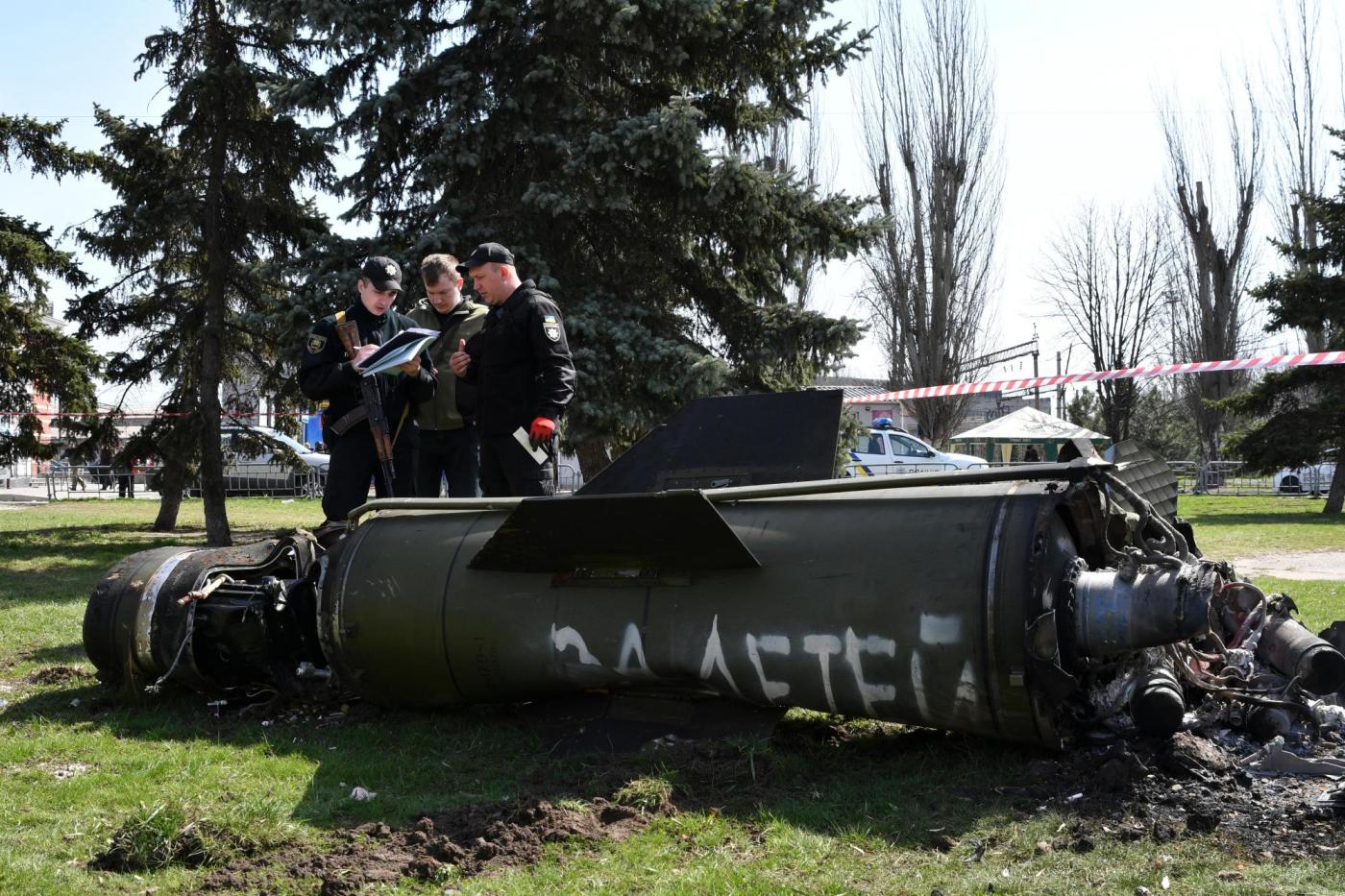 By ADAM SCHRECK and CARA ANNA

KYIV, Ukraine (AP) — Civilian evacuations moved forward in patches of battle-scarred eastern Ukraine on Saturday, a day after a missile strike killed at least 52 people and wounded more than 100 at a train station where thousands clamored to leave before an expected Russian onslaught.

In the wake of the attack in Kramatorsk, several European leaders made efforts to show solidarity with Ukraine, with the Austrian chancellor and British prime minister visiting Kyiv — the capital city that Russia failed to capture and where troops retreated days ago. U.K. Prime Minister Boris Johnson met with Ukrainian President Volodymyr Zelenskyy in a surprise visit in which he pledged new military assistance, including 120 armored vehicles and new anti-ship missile systems.

Zelenskyy noted the increased support in an Associated Press interview, but expressed frustration when asked if weapons and other equipment Ukraine has received from the West is sufficient to shift the war’s outcome.

“Not yet,” he said, switching to English for emphasis. “Of course it’s not enough.”

More than six weeks after Russia first invaded Ukraine, it has pulled its troops from the northern part of the country, around Kyiv, and refocused on the Donbas region in the east. Western military analysts said an arc of territory in eastern Ukraine was under Russian control, from Kharkiv — Ukraine’s second-largest city — in the north to Kherson in the south. But Ukrainian counterattacks are threatening Russian control of Kherson, according to the Western assessments, and Ukrainian forces are repelling Russian assaults elsewhere in the Donbas region in the southeast.

Ukrainian authorities have called on civilians to get out ahead of an imminent, stepped-up offensive by Russian forces in the east. With trains not running out of Kramatorsk on Saturday, panicked residents boarded buses or looked for other ways to leave, fearing the kind of unrelenting assaults and occupations by Russian invaders that delivered food shortages, demolished buildings and death to other cities elsewhere in Ukraine.

“It was terrifying. The horror, the horror,” one resident told British broadcaster Sky, recalling Friday’s attack on the train station. “Heaven forbid, to live through this again. No, I don’t want to.”

Ukraine’s state railway company said in a statement that residents of Kramatorsk and other parts of the country’s contested Donbas region could flee through other train stations. Deputy Prime Minister Iryna Vereshchuk said 10 evacuation corridors were planned for Saturday.

Zelenskyy called the train station attack the latest example of war crimes by Russian forces and said it should motivate the West to do more to help his country defend itself.

Russia denied it was responsible and accused Ukraine’s military of firing on the station to turn blame for civilian casualties on Moscow. A Russian Defense Ministry spokesman detailed the missile’s trajectory and Ukrainian troop positions to bolster the argument.

Western experts and Ukrainian authorities insisted that Russia launched the weapon. Remnants of the rocket had the words “For the children” in Russian painted on it. The phrasing seemed to suggest the missile was sent to avenge the loss or subjugation of children, although its exact meaning remained unclear.

Western experts dismissed Kremlin spokesperson Dmitry Peskov’s assertion that Russian forces “do not use” Tochka-U missiles, the type that hit the train station, which is in Ukrainian government-controlled territory in the Donbas.

The attack came as Ukrainian authorities worked to identify victims and document possible war crimes by Russian soldiers in northern Ukraine. The mayor of Bucha, a town near Kyiv where graphic evidence of civilian slayings emerged after the Russians withdrew, said search teams were still finding bodies of people shot at close range in yards, parks and city squares.

Workers unearthed the 67 bodies Friday from a mass grave near a church, according to Ukraine’s prosecutor general. Russia has falsely claimed that the scenes in Bucha were staged.

Ukrainian authorities and Western officials have repeatedly accused Russian forces of committing atrocities in the war that began with Russia’s Feb. 24 invasion. A total of 176 children have been killed, while 324 more have been wounded, the Prosecutor General’s Office said Saturday.

Speaking to AP inside the heavily guarded presidential office complex in Kyiv, Zelenskyy said he is committed to negotiating a diplomatic end to the war even though Russia has “tortured” Ukraine. He also acknowledged that peace likely will not come quickly. Talks so far have not included Russian President Vladimir Putin or other top officials.

“We have to fight, but fight for life. You can’t fight for dust when there is nothing and no people. That’s why it is important to stop this war,” he said.

Ukrainian authorities have said they expect to find more mass killings once they reach the southern port city of Mariupol, which is also in the Donbas and has been subjected to a monthlong blockade and intense fighting.

As journalists who had been largely absent from the city began to trickle back in, new images emerged of the devastation from an airstrike on a theater last month that reportedly killed hundreds of civilians seeking shelter.

Military analysts had predicted for weeks that Russia would succeed in taking Mariupol but said Ukrainian defenders were still putting up a fight. The city’s location on the Sea of Azov is critical to establishing a land bridge from the Crimean Peninsula, which Russia seized from Ukraine eight years ago.

Many civilians now trying to evacuate are accustomed to living in or near a war zone because Moscow-backed rebels have been fighting Ukrainian forces since 2014 in the Donbas, a mostly Russian-speaking, industrial region.

Ukrainian officials have pleaded with Western powers almost daily to send more arms, and to further punish Russia with sanctions, including the exclusion of Russian banks from the global financial system and a total European Union embargo on Russian gas and oil.

The deaths of civilians at the train station brought renewed expressions of outrage from Western leaders and pledges that Russia would face further reprisals. On Saturday, Russia’s Defense Ministry tried to counter the dominant international narrative by again raising the specter of Ukraine planting false flags and misinformation.

A ministry spokesman, Major Gen. Igor Konashenkov, alleged Ukraine’s security services were preparing a “cynical staged” media operation in Irpin, another town near Kyiv. Konashenkov said the plan was to show — falsely, he said — civilian casualties at the hands of the Russians and to stage the slaying of a fake Russian intelligence team that intended to kill witnesses. The claims could not be independently verified.

Austrian Chancellor Karl Nehammer said during a visit to Kyiv that he expects more EU sanctions against Russia, but he defended his country’s opposition so far to cutting off deliveries of Russian gas.

A package of sanctions imposed this week “won’t be the last one,” the chancellor said, acknowledging that “as long as people are dying, every sanction is still insufficient.” Austria is militarily neutral and not a member of NATO.

Johnson’s visit came a day after the U.K. pledged an additional 100 million pounds ($130 million) in high-grade military equipment to Ukraine.

Anna reported from Bucha, Ukraine. Robert Burns in Washington, Jill Lawless and Danica Kirka in London and Associated Press journalists around the world contributed to this report.