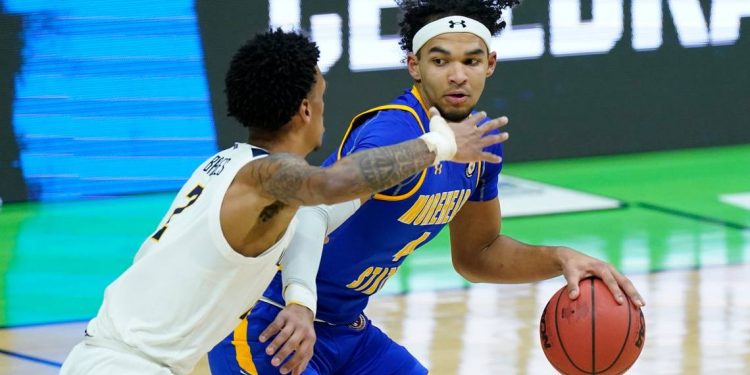 
Outside the office of Morehead State men’s basketball coach Preston Spradlin is what he describes as “a 12-foot picture” of Eagles star big man Johni Broome.

Now, the 6-foot-10, 235-pound Broome has his name in the transfer portal. He is receiving recruiting interest from college basketball luminaries such as Auburn, Duke, Florida, Gonzaga, Houston, Kentucky, Louisville and Memphis.

Yet Spradlin said he has no immediate plans to remove Broome’s photo. “We are not going to rip it down just because he is going to wear a different jersey next year,” Spradlin said Thursday.

One of the more fascinating aspects of the current moment in college basketball is how coaches are handling losing key players into the portal. In his public comments, Spradlin, 35, is writing the textbook on how to handle it deftly.

With Broome as his team’s cornerstone, Spradlin has directed Morehead State on a stirring two-year run. The Eagles have produced back-to-back 23-win seasons, two trips to the Ohio Valley Conference Tournament finals and one NCAA Tournament appearance.

Yet since Morehead’s 2021-22 season ended with a crushing 71-67 loss to top-seeded Murray State in the OVC tourney title game, Spradlin has watched as the core of his very strong team has disappeared into the transfer portal.

It would be challenging enough if the only loss was Broome, one of the best big men (16.8 points, 10.5 rebounds, 3.9 blocks per game) in college hoops.

“It is what it is. (The transfer portal) is part of the deal now,” Spradlin said. “I got into this to care about the kids and help them and do what’s best for them. And I am going to continue to do that whether they are on our roster or they are looking to get on someone else’s.”

I support a “players-first” approach to college sports transfer rules. The players only get one chance, just four years (under non-global pandemic conditions), to play college sports.

That experience should be maximized.

So if a player like Broome, lightly recruited as a Florida high schooler, wants a crack at playing under some of the brightest lights in college hoops, he should have that chance.

Yet while acknowledging that greater good, I feel empathy for coaches at schools “down the food chain” who see players they invested sweat equity into depart for programs that provide bigger stages.

This year, it is Spradlin and Morehead State experiencing the downside of portal life.

With traditional powers Belmont and Murray State exiting the OVC for the Missouri Valley Conference, Morehead would have been the prohibitive favorite to win its league in 2022-23 — had its team held together.

“It’s a part of the business — and the business is changing,” Spradlin said. “It doesn’t matter if you are a low-, mid- or high-major (program), if you don’t figure out a way to use the portal to your advantage, you’re going to get left behind.”

For the Morehead program, the hope is the success that Broome had in his two seasons in blue and gold makes MSU more attractive to other prospects of a similar profile.

On Wednesday, Morehead State announced it had signed 6-10 Reis Jones, a Maryland product who averaged 13 points, 10 rebounds and four blocked shots this past season at Virginia’s Flint Hill School.

“(Jones is) going to end up being a good player for us,” Spradlin said. “How soon, I’m not sure.”

For Morehead State, the loss of Broome is bigger than just losing its best player. Spradlin and his coaching staff were one of the few who recognized during AAU play the potential of the willowy-thin Florida big man.

Now, Broome is ranked the No. 3 player in the transfer portal by national college hoops writer Jeff Goodman (who also has Cooper No. 74 on that list) and has some of the biggest brands in men’s college hoops pursuing him.

“(Broome) came on one (recruiting) visit — to Morehead, Kentucky — the last time,” Spradlin said. “He’s going to take more than that this time, that’s for sure.”

At a time when whispers of schools tampering with players are rife, Spradlin said he does not believe Broome was wooed off of the Morehead State roster. “No, I don’t,” he said. “To my knowledge, he was not.”

So wherever Broome is playing next season, “I will be his biggest cheerleader,” Spradlin said. “We love our guys. We wish them the best. And we are going to continue to support them whether we get the opportunity to coach them or not moving forward.”

Mark Story has worked in the Lexington Herald-Leader sports department since Aug. 27, 1990, and has been a Herald-Leader sports columnist since 2001. I have covered every Kentucky-Louisville football game since 1994, every UK-U of L basketball game but three since 1996-97 and every Kentucky Derby since 1994.
Support my work with a digital subscription
Tags: beatenBroomeJohnilossMoreheadSpradlinstates
Previous Post

Kendall Stanley: The horrors of Ukraine