Mortgage rate was supposed to be locked : RealEstate 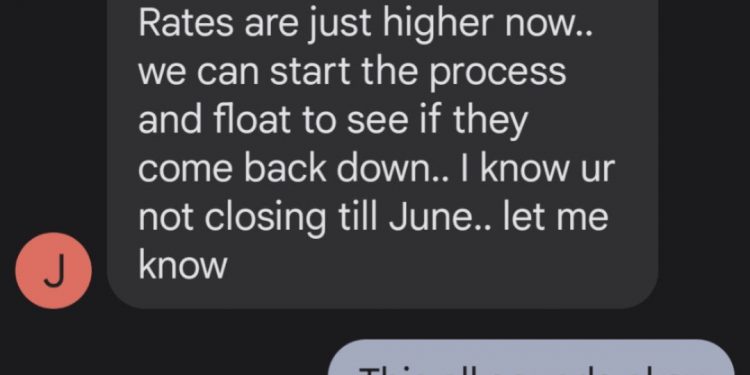 
I initially posted this in legal advice. Not too much is coming out of it though other than to speak to an attorney, which I am already doing. So I guess maybe I am just looking to vent? Curious if anyone else has experienced something similar?

I’ll say upfront that I appreciate anyone who makes it through this post. I am going to try and keep it to the highlights.

Back in November I was looking into buying a condo. There was a new building in my neighborhood (I currently rent), and I went to go check it out. Wasn’t looking to move until June of this year because that’s when my current lease is up, but figured if I liked what I saw then when June came around I could just make a move then having already seen the building.

Anyway, I really liked one of the units specifically (outdoor space, high floor, etc). The building sponsor was willing to take 10% down upfront, and then the final 10% in June which became the closing date (June 1 to be exact). There is a mortgage contingency in the contract.

Okay – so in parallel I was connected to Citizens Bank via my real estate agent. This person’s job title (let’s call him Joe) is Sales Manager at Citizens Bank and long story short is he said based on my income etc, they could do a 30yr fixed at 2.85%. I agreed. But then a couple weeks later they said actually we’ll need to see your 2021 drafted tax returns just to verify income for 2021. So I said okay, and that I’d circle back once I had them.

Fast forward to January 11. My accountant puts a draft tax return together and I forward it to Joe. He then sends me the formal application and I am pre-approved quickly. On January 12, I ask again about the locked in interest rate – making it very clear this is something I am keen on. He says that he is still crunching the numbers and will get back to me shortly.

Then he texts me confirming a bit later that my income looks good – and asks specifically if I would like to lock in the rate. I say lock it in now. He says OK and that he is emailing me next steps. I feel like this piece is critical, so here are the screenshots from that interaction:

The email with next steps doesn’t come super fast, so I follow back up on the email thread we have re-iterating the terms. It’s worth noting that it’s not just Joe on this thread, but a couple other folks from Citizen Bank as well. My exact email copy says:

Looks like we are good for 30yr fixed at 3%! Ready to open the checking account and whatever else I need to do, just need someone to send over those next steps.

Julia [not her real name] will be sending next steps today.

From there, it’s a flurry of paperwork.

Fast forward to today. I reach out to Citizens because I was interested in pushing back my closing date, and I was curious if my rate lock extends (and if it does, for how long). For context – my girlfriend and I thought it may be nice to travel for a few months while we weren’t anchored to any specific place. Figured it couldn’t hurt to ask.

Well, I am glad I did. Because the response I got back was “your rate isn’t locked, sorry for the miscommunication”. Meaning not only could it not be extended (which I expected and would have been totally fine), but it wasn’t even locked for the June 1 date like we had talked about. We had some back and forth and basically what Joe says is that they can’t lock in a rate for more than 90 days, but since we are *now* within 90 days, we can lock in a rate today for June 1.

My head starts spinning in confusion. What were we talking about in November through January then? This 90 day hold was never brought up once, and the whole time he knew close was in June. This is in many email exchanges and obviously the text screenshots I shared. And, if that was the case, we just needed to hold until FEB 1 when we were talking on JAN 11-13. Instead, no one says anything about the rate not being locked, and they are coming at me now with a rate of 4.15%. I was very proactive about locking in that 3% in January because it was obvious rates were going up, and it was like it didn’t happen? Even though I have texts and emails?

So far, they are refusing to honor the initial rate. I was connected to Joe’s manager who basically said any conversation that happened before the application was just chit chat, and it would be like “wanting to buy apple stocks but you didn’t.” It took me some time to dig through everything and realize that the text interaction did in fact happen after I filled out the initial application, where Joe texts me the rates and asks me if I want to lock it in and I very explicitly say yes.

Now, I have no idea if Joe didn’t relay this preference to lock in the rate, if the loan officer or underwriter accidentally made a mistake, or what happened. But it is true that in the pile of documents I have, it says the loan is 3% and there is a small box where it indicates if the rate is locked and it’s checked no. I didn’t catch this when all the paperwork was sent over to me.

But is it fair that what I clearly communicated wasn’t translated correctly in the paperwork and now I have to pay for that? It’s a $2MM condo so that extra 1.15% interest is going to make a big difference and I honestly don’t want to do the deal at that rate.

The real kicker after talking to my attorney is that — because I had a commitment letter circulated to my condo’s attorneys — the mortgage contingency is no longer valid. So now I *have to* go forward with this deal, by either accepting this new rate from Citizens or trying to find another bank to give me one, which would mean paying the application fees all over again and knowing that the market is no longer at 3%.

It was only at the end of the day that I was able to get together all of the evidence though, with the timeline and the text messages. I sent it all over to Citizen and they haven’t responded yet so I guess I am hoping they do tomorrow morning. My attorney looked over the interactions and said worst case, they can make a buyer’s beware argument because in the paperwork they ended up sending over, the box was checked “no” for locked rate. But the fact that I have an email paper trail where locked in rates are discussed numerous times, and then via text he explicitly asks if I want him to lock in the rate and I say yes, makes my case strong and they really should honor it.

Apologies for length and redundancy. And thanks in advance.

Raven-Symoné reveals she's 'really proud' of Will Smith 'for apologizing'