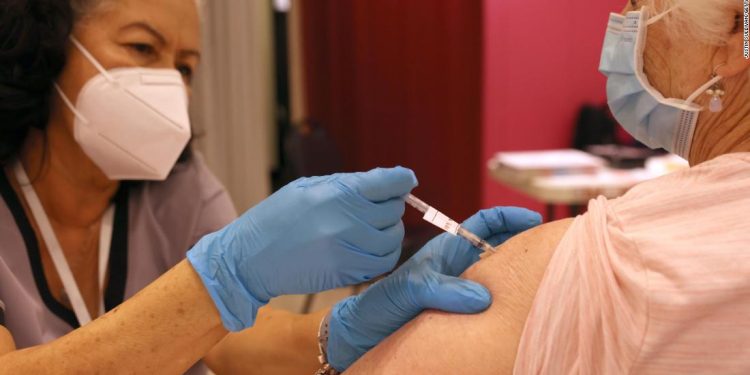 For many of those who are vaccinated or were previously infected, learning of a close contact with the disease is less frightening than frustrating.

Testing is more and more normal. Masks are less and less visible.

Kids in the US who are between 6 months and 5 years old could be eligible for vaccines by June, a huge relief to many parents. Many others might not get their small children vaccinated. Just over a third of children ages 5-11 are fully vaccinated.
In the next few weeks, the US is likely to record its 1 millionth reported Covid-19 death, a number that is so staggering it seems unbelievable.

There is an uptick in cases in the US and hospitalizations are up 10% since last week. Hopefully the rate of deaths continues to fall.

Most Americans have had Covid-19

According to data through February released by the US Centers for Disease Control and Prevention, nearly 60% of adults and 75% of children have antibodies indicating that they’ve been infected with Covid-19.

The data comes from an ongoing study of blood samples sent to commercial laboratories across the US.

At the beginning of December, an estimated 34% of Americans had antibodies, which suggests the Omicron variant infected a quarter of the population.

We can assume Covid-19 will surge back

The warning from Dr. Deborah Birx — the White House Coronavirus Response Task Force coordinator during the Trump era, who is out with a new book — is that we can expect surges in cases in the South in the summer and in the North in the winter.

During an appearance on CBS News on Sunday, Birx pointed to a new rise in Covid-19 cases in South Africa.

Public health officials need to prepare the public, she said, and make sure everyone knows that immunity, from infection or vaccination, wanes over time.

Even as public health officials push most people to get booster shots months after vaccination, they have not updated the definition of “fully vaccinated” to include a booster.

While more than three-quarters of the country has received at least one dose of a Covid-19 vaccine, less than one-third has received a booster.

For this reason, officials have moved away from that term — “fully vaccinated” — and instead encourage people to stay “up to date,” which means getting a booster when eligible.

According to the CDC’s data, these are the vaccination numbers:
More boosters may be required. In March, the CDC authorized a second booster dose of the Pfizer/BioNTech and Moderna vaccines for people over 50 who are four months past their first booster doses.

The most durable immunity comes for people who are up to date on their vaccines and have been previously infected.

Many doctors still say to stay up to date on vaccines as they are authorized by the US Food and Drug Administration.

“We still need to push forward getting those vaccines done to give the highest level of protection we possibly can,” Dr. Anand Swaminathan, an emergency medicine physician, said on CNN over the weekend.

He argued that we still don’t know a lot about the disease and that cases of long Covid are worth trying to avoid.

What exactly is long Covid?

A must-read new CNN report by Jacqueline Howard looks at Linda Timmer, 64, who didn’t display any traditional Covid-19 symptoms and was not aware of having been exposed to the coronavirus when she tested positive in August 2020.

Her case of long Covid pushed her into an early retirement and to move closer to family — and 20 months later, she still has debilitating symptoms.

It’s misunderstood and hard to diagnose, but symptoms can drag on for months.

Many states are dialing back their Covid-19 data tracking efforts from daily to weekly reports, CNN’s Deidre McPhillips wrote last week, which could affect how public health officials are able to gauge and predict outbreaks.

She wrote: The rise of the BA.2 subvariant and the general unpredictability of the coronavirus leave the future of the pandemic — and the resources needed to fight it — largely unknown.

“Things are not stable right now,” said William Hanage, an epidemiologist and associate professor at the Harvard T.H. Chan School of Public Health. “Even if I don’t reckon we are going to see [another] large surge, weekly reporting means that if I am wrong, we would learn about it later and so be able to do less about it.”

Dr. Anthony Fauci, President Joe Biden’s chief medical adviser, had to recalibrate comments he had made last week when he said the US is nearly out of the pandemic.

“We’re not over the pandemic. Don’t let anybody get the misinterpretation that the pandemic is over, but what we are in is a different phase of the pandemic,” Fauci said. “A phase that’s a transition phase, hopefully headed toward more of a control where you can actually get back to some form of normality without total disruption of society, economically, socially, school-wise, etc.”