A mother has claimed her two-year-old boy was left paralysed by Covid.

The mother-of-two said his condition deteriorated and within one month he was unable to walk, often distressed and requiring constant care.

Mirko never tested positive for Covid but Ms Ibrahim, 27, claims she knew ‘deep down’ it was the viral infection.

‘My son was a healthy, active two-year-old who was walking and talking,’ he said. ‘He was such an easy child but everything changed over a few weeks. I felt I had lost him.’

Ms Ibrahim took her son to a specialist clinic in Germany, where he was diagnosed with post infectious cerebellar ataxia — a condition that can make it difficult to balance, walk, speak, swallow or see.

In the majority of cases, post-infectious cerebellar ataxia goes away completely within a month and most children have no lasting mobility problems.

The medics abroad could not confirm whether Mirko’s illness was caused by Covid or by the common Epstein-Barr virus, which can cause similar symptoms.

Mirko was found to have antibodies for both viruses, but it is not clear how recent the infections were.

For the overwhelming majority of children, Covid causes mild or no symptoms at all. Seventy-five children under 15 have died from the virus during the pandemic. 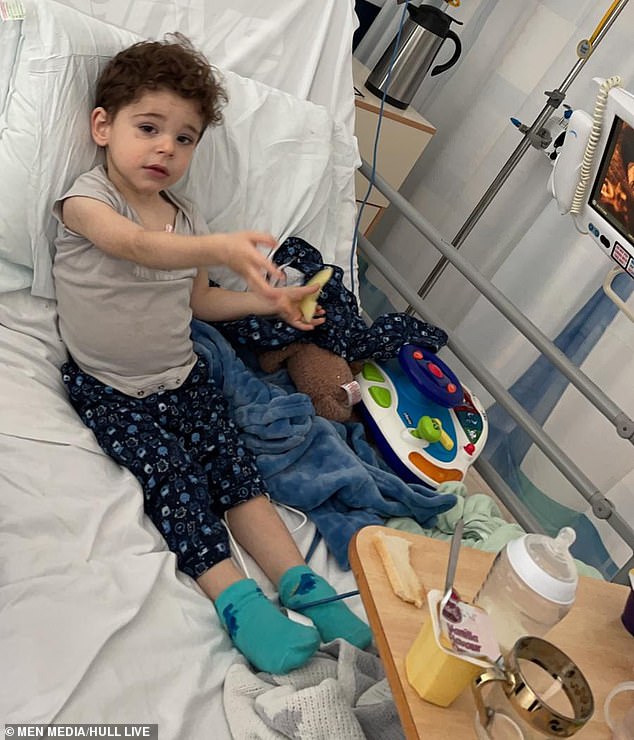 After repeatedly being sent home from hospitals in the UK and being told there were ‘other children who were more ill’, Ms Ibrahim took her son to a specialist clinic in Germany. Doctors there diagnosed him with post infectious cerebellar ataxia — a condition that can make it difficult to balance, walk, speak, swallow or see 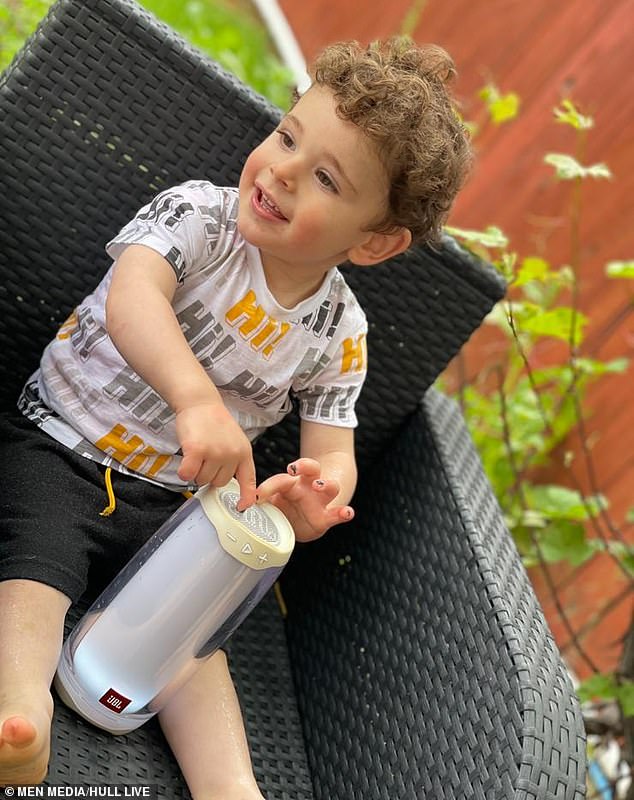 Mirko Ibrahim, from Hull, became a ‘different child’ after suffering flu-like symptoms in October. His mother, Kawzr Ibrahim, claims his condition deteriorated over just one month and he was left unable to walk, often distressed and requiring constant care.

Mirko is now receiving regular physiotherapy treatment on the NHS and has an appointment with a consultant in six months.

After Mirko fell ill with flu-like symptoms last year, Ms Ibrahim said she was unable to get a face-to-face GP appointment due to Covid restrictions.

Technical problems during a virtual appointment meant the doctor could not see Mirko, meaning Ms Ibrahim had to describe his symptoms.

Following a one-night stay, he was discharged and told to wait for a neurologist consultant appointment to come through the post.

Ms Ibrahim said: ‘I told the hospital that this was not my son’s usual behaviour. He didn’t normally walk or move like this.

‘I knew deep down something wasn’t right. I felt heartbroken and like nobody was listening to me.’

A week later, Mirko’s shaking worsened and he developed a very high temperature. Ms Ibrahim said: ‘I was so worried and called 999. An ambulance came and we were taken to hospital. 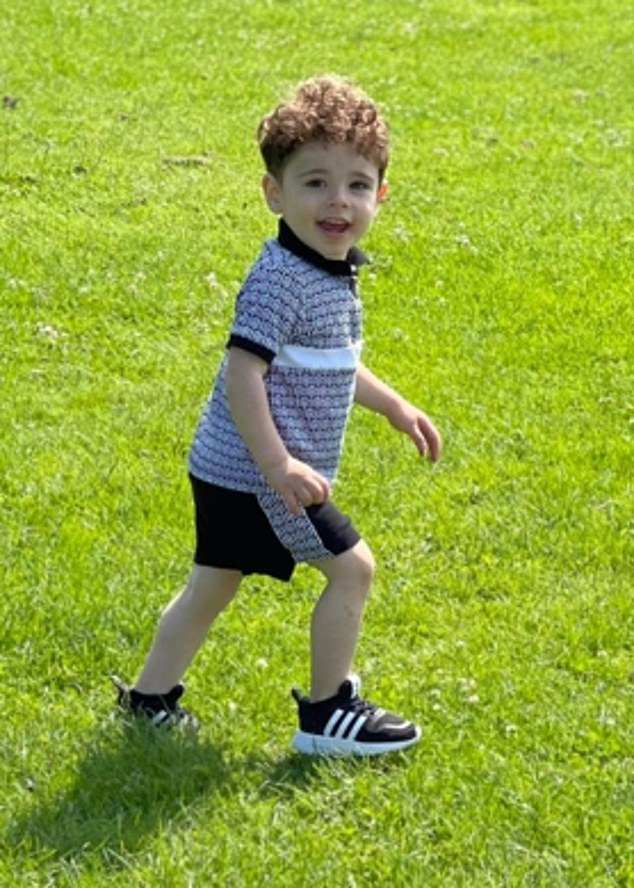 His mother said: ‘I used to regularly take Mirko to soft play and to the park and he would just enjoy playing with his big sister and run around, now he needs two to three people help him move in the soft play area’ 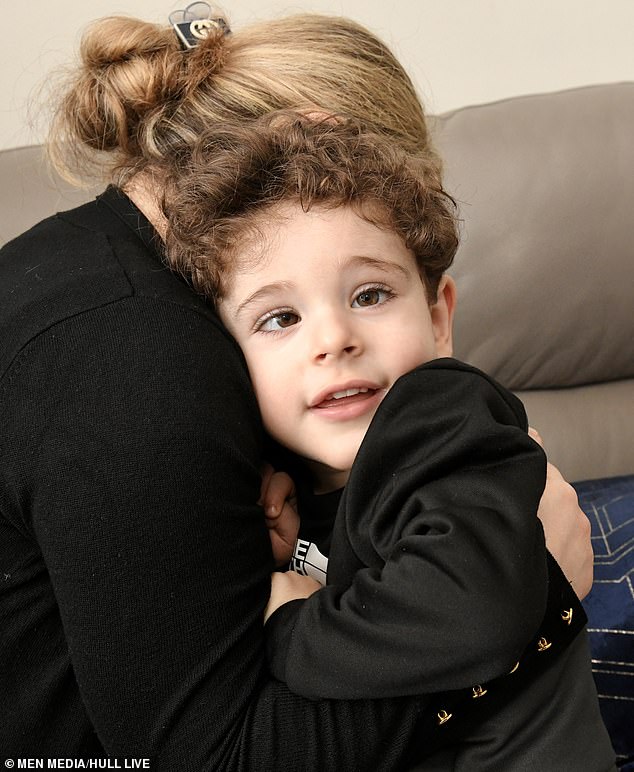 The medics abroad could not confirm whether Mirko’s illness was caused by Covid or by the common Epstein-Barr virus, which causes flu-like symptoms, because they found Mirko had previously contracted both infections. But the mother-of-two said ‘it was clear this is all the outcome from Covid’. Mirko is now receiving regular physiotherapy treatment on the NHS and has an appointment with a consultant in six months

‘I just wanted my son to get better, but after a few hours we were sent home again. I felt so angry that nobody seemed to be doing anything.’

When his condition did not improve, Ms Ibrahim took Mirko back to hospital three days later, because she ‘knew something was wrong with him’.

She said: ‘I told the hospital “please help me my child is not normal, look at him, he is shaking”.

Ataxia describes a group of disorders that affect coordination, balance and speech, which is thought to affect up to 10,000 people in Britain.

Post-infectious cerebellar ataxia is the most common cause of the condition in children and is usually diagnosed after other conditions have been excluded.

The condition usually goes away on its own and doesn’t require treatment.

Treatment ranges from speech, language and physical therapy to painkillers

‘I told them I wasn’t leaving until I had been given answers but I was told his illness was not serious and that there were other children there who were more ill.’

Ms Ibrahim claims she was told to leave the hospital due to Covid policy and was not told whether Mirko was tested for Covid.

Mass free testing was still in place at the time and it is not clear why Mirko was not swabbed for Covid at home.

Just days later, Mirko stopped walking and was taken back to hospital, where he stayed for four days. He received an MRI scan and had various blood tests.

But the pair were sent home again after the tests failed to pick up anything wrong with the toddler. Ms Ibrahim said she ‘still didn’t know what was going on’ but Mirko ‘wasn’t getting any better’.

She said: ‘I just couldn’t stop crying. My boy was going downhill and it was breaking my heart. I hadn’t slept in weeks, it was horrible to see him suffer like this.

‘My son became paralysed within weeks and nothing was done. I just kept getting sent back home and told to wait but in Mirko’s case time was not on our side. I had to leave my job as my son needed me.’

Mirko was taken to hospital for the fifth time days later when his shaking ‘became uncontrollable and he couldn’t stop crying’, Ms Ibrahim said.

A lumbar puncture — a thin needle inserted between the bones in the to take a sample of fluid — was carried out, but this came back normal.

His mother said he was transferred to a hospital in Leeds for further tests, where he spent his second birthday.

But these tests also came back clear and Mirko was discharged five days later.

She said: ‘Although I trusted the doctors I still did not have a confirmed diagnosis.

‘The doctors in Hull had told me that nothing was guaranteed as they were still learning about what the condition was. I didn’t know what to believe anymore.’

By November, Mirko started to become cross-eyed, which Ms Ibrahim said caused his sight to deteriorate.

In January, Ms Ibrahim decided to take her son to a private clinic paediatric neurology clinic in Germany.

Tests showed he had Covid antibodies and had been infected with Epstein-Barr virus, which almost everyone has had by the time they are an adult.

But the medics could not confirm which virus had caused Mirko’s condition.

Ataxia describes a group of disorders that affect coordination, balance and speech, which is thought to affect 10,000 Britons.

What You Need to Know

Everything to Know About the Nordic Spirit