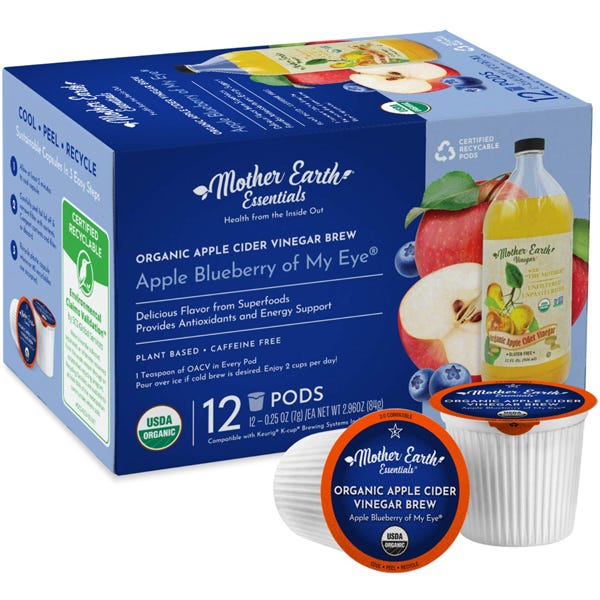 Like so many people, I used to begin my day with a freshly brewed cup of coffee. I so often relied on caffeine to meet tight deadlines or for an energy boost at work and when the pandemic hit, I drank coffee to offset the

and isolation of being home all the time.

Once one cup started to have no effect, I’d drink more. Before I knew it, I was up to at least four cups a day.

But I started to become restless and irritable whenever I drank it. The caffeine affected my sleep schedule so much that on days when I’d cut myself off at noon, I’d still wake throughout the night and there’d be periods where I didn’t sleep for days. I began noticing stains on my teeth and felt an intense burning in my stomach followed by a constant headache.

Despite that, I didn’t want to give it up, worried I might not be able to function or be productive without it.

Then a friend recommended Mother Earth Essentials Superfood Tea Pods and, not to be dramatic, the suggestion proved life-changing.

The pods are an herbal tea made with real fruit and organic apple cider vinegar, and I’ve found them to deliver a more steady and healthy boost of energy. While I initially tried them to find a substitute for caffeine, they ended up having a seriously positive impact on my digestion, too.

In just a few weeks, I was able to wean off coffee entirely and I haven’t looked back since.

Mother Earth Essentials Superfood Tea Pods look like coffee creamer pods and you turn them into a drink by putting one into a Keurig machine.

For me, these tea pods deliver a smooth boost of energy, similar to those produced by Yerba Mate. This was surprising to me because the tea is caffeine-free yet has the natural energizer of apple cider vinegar — all without the typical harsh taste of ACV.

At first, I was hesitant to try it: ACV often has a tangy, sour taste, and trying tea made with vinegar didn’t sound appealing. But I was surprised by how delicious the flavor was. It comes in four flavors and I quickly fell in love with apple blueberry. The flavor reminded me of the first bite into a homemade blueberry muffin.

In addition to being easy to brew and delicious to drink, I also like Mother Earth Organic Vinegar specifically because its president is an African-American female. Plus, it’s widely available for such a niche product – you can find them on Amazon and in places like Publix, Sprouts, or Costco.

The benefits of apple cider vinegar

The main reason I turned to these pods was for the healthier energy boost but because they have organic ACV, the upsides go far beyond how awake I feel in the mornings.

“There are many benefits of apple cider vinegar from digestive health to balancing blood sugar and calming an upset stomach,” Joy McCarthy, a Certified Holistic Nutritionist and author of “The Joyous Cookbook,” told Insider. “ACV contains enzymes, good bacteria, and yeast — all of which support overall gut health.”

Uma Naidoo, MD, and a Harvard-trained psychiatrist pointed me to a 2021 study from Nutrients which found that drinking apple cider vinegar twice a day helped improve symptoms of depression among a small group of healthy people. Other studies suggest ACV also helps with things like lowering cholesterol.

I wasn’t surprised to hear that apple cider vinegar has so many benefits. I enjoy 2-3 cups a day of these pods and have noticed having more energy without the crash I’d experience from drinking coffee.

When I started the trial of switching from coffee to tea pods, I thought I’d cave and turn back after a few days. I owe all my success with giving up the brew to discovering Mother Earth Essentials Superfood Tea Pods.

Instead of going on a morning coffee run, I now feel a deep sense of calm drinking a warm cup of tea I made at home. I no longer wake up at 4:30 am from troubled sleep nor am I anxious I won’t be productive without caffeine.

But more than just being able to sleep better and have more energy, I feel as though ACV has had a serious impact on my digestion, too. What’s more, it’s liberating to have given up coffee and know that I don’t depend on java for my functionality and happiness. I hope more people can get a taste of that freedom, too.

The Best New Plants for Your Garden

The Best New Plants for Your Garden